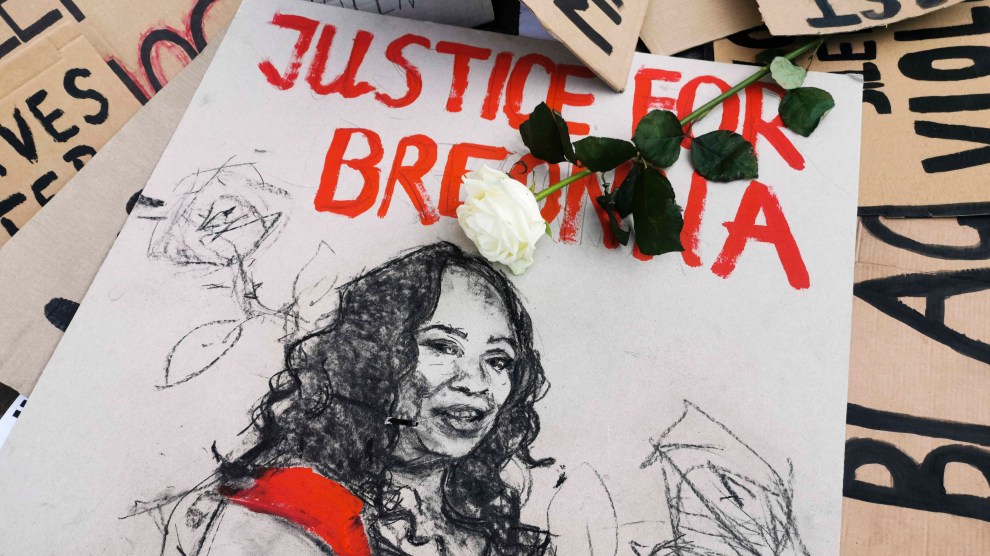 A sign in memory of Breonna Taylor in front of the US Consulate General in Krakow, PolandBeata Zawrzel/NurPhoto via ZUMA Press

About three months after police officers barged into Breonna Taylor’s home in Louisville, Kentucky, in the middle of the night and killed her, her town’s city council unanimously voted to ban police officers from using “no knock” warrants to enter apartments.

The vote on Thursday came after weeks of protests in Kentucky and around the country about police violence against Black people. Taylor, 26, was an EMT. In mid-March, police with a no-knock warrant used a battering ram to break into her apartment as part of a drug investigation, even though neither she nor her boyfriend had a criminal record for drugs or violence. Taylor’s boyfriend, thinking the intruders were burglars, shot at one officer’s leg. The officers responded with a barrage of bullets that struck Taylor eight times. No drugs were found on the premises.

No-knock warrants allow police to force their way into a home without knocking or announcing their presence. They are especially common in drug raids, because officers often argue that knocking might give a suspect time to destroy evidence or arm themselves. Officers who don’t get a no-knock warrant may try to obtain a “quick knock” warrant, which allows police to break into a home just seconds after knocking.

Since the 1970s and 1980s, when the war on drugs ramped up, no-knock and quick-knock drug searches have surged—from around 3,000 in 1981 to at least 60,000 annually in recent years, as I previously reported. And people of color are disproportionately targeted. Black people and Latinos accounted for 61 percent of people targeted in a 2014 study of more than 800 such raids by law enforcement around the country. The officers reported finding drugs in only about a third of these searches, suggesting that many people were searched unnecessarily. And some of them were killed or injured during the process.

Under the new Louisville law, police executing a search warrant must knock on the door loud enough and long enough for the people inside to hear them, and they must announce themselves. Absent “exigent circumstances,” they must also wait at least 15 seconds or “a reasonable amount of time for occupants to respond,” whichever is greater, before attempting to enter. Louisville Mayor Greg Fischer said he planned to sign the bill, called Breonna’s Law, as soon as possible.

But that won’t stop these raids from happening in other cities. So on Thursday, Kentucky Sen. Rand Paul introduced federal legislation that would ban federal law enforcement from using no-knock warrants, and ban local police departments from using them if they receive funds from the Justice Department. He put the legislation forward after having a conversation with Taylor’s family.

The three officers involved in Taylor’s death are on administrative leave but have not been arrested or charged with a crime, as protesters are requesting. Still, speaking to reporters on Thursday, Taylor’s mom, Tamika Palmer, said the city council’s vote to ban no-knock warrants was a positive step forward. “Breonna, that’s all she wanted to do was to save lives,” Palmer said of her daughter, who had been scheduled to work a hospital shift the morning after she was killed. “So with this law, she will be able to continue to do that. So we’re grateful for that.”