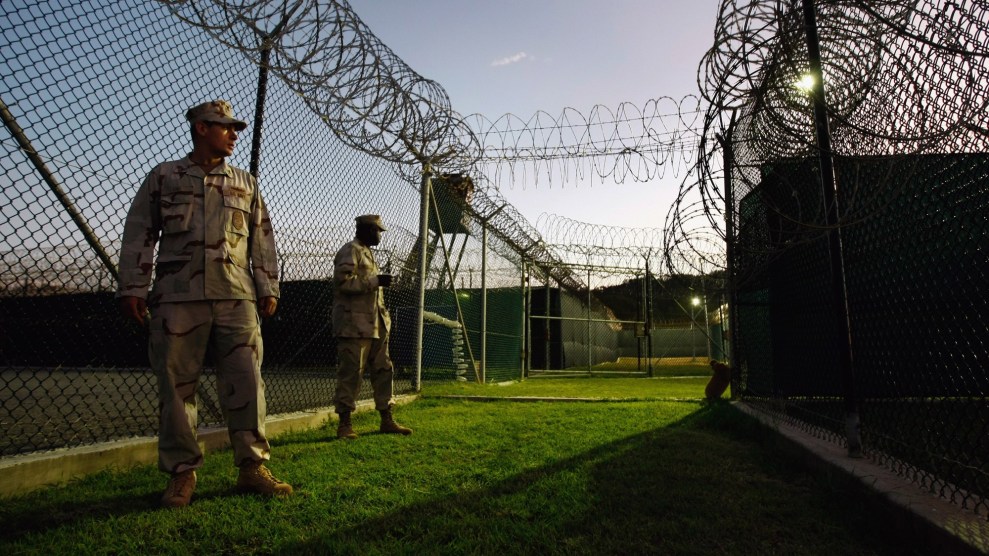 Congressional Democrats are calling on Defense Secretary Mark Esper to release details related to the operation of military prisons, including how many have been accredited and what standards the Pentagon uses to maintain “oversight and accountability” at these facilities.

In a letter publicly released Wednesday, Sen. Elizabeth Warren (D-Mass.) and Rep. Ruben Gallego (D-Ariz.) raised concerns about the American Correctional Association, a trade group for prisons that simultaneously acts as an official accreditor. The arrangement presents an obvious conflict of interest for the group, rendering “ACA’s standards toothless,” the lawmakers wrote. Documents provided to Warren’s office, they said, suggest that the ACA “has not denied accreditation to a single facility in the last six years.” A spokesperson for the ACA did not respond to a request for comment regarding that claim or other points brought up in the letter.

Aside from Guantánamo Bay, not much is known about military prisons or other detention facilities run by the Defense Department across the globe, but the ACA apparently plays a key role in regulating them. Warren’s office found that several Army, Navy, and Marine Corps prisons rely on ACA accreditation, despite indications that the process is not truly independent. According to the lawmakers’ letter, “the ACA grants facilities three months’ advance notice of its audits; provides facilities with ‘technical assistance,’ including ‘standards checklists’ and an ‘audit readiness evaluation’ that help a facility know when to schedule its audit and what to expect; and, at a facility’s request, the ACA will first conduct a ‘mock audit’ to help the facility prepare for the real thing.”

The problem, as the lawmakers see it, lies in the ACA’s dual role as “accreditor and advocate.” Unlike most de facto regulatory bodies, the ACA makes millions of dollars each year from its annual conferences, which are sponsored by private prison giants such as CoreCivic, the GEO Group, and MTC. The ACA also makes money from accreditation contracts with prisons owned by these firms, potentially creating an incentive for auditors to ignore shoddy conditions, according to Warren and Gallego.

When Mother Jones’ Shane Bauer reported from a private prison in Louisiana run by the Corrections Corporation of America (now known as CoreCivic), he found that successive ACA audits gave the facility a near-perfect 99-percent score despite substantial problems, including staffing issues. Other private prisons have also suffered from major problems. The Walnut Grove Youth Correctional Facility in Mississippi, which is run by the GEO Group, was accredited despite being described by a federal judge as “a picture of such horror as should be unrealized anywhere in the civilized world.”

Warren and Gallego called on Esper to provide a list of “all Department facilities accredited by the ACA,” any contracts between the Pentagon and the ACA, and a full list of accreditation reports, as well as internal guidance the Pentagon uses to ensure “the health and safety of confinement and corrections facilities.” When asked about the letter, a DOD spokesperson said in an emailed statement, “As with all congressional correspondence, we will respond directly to the authors of the letter.”

The Defense secretary has frequently clashed with Warren, a member of the Senate Armed Services Committee, since his nomination to the Pentagon’s top job last year. During his confirmation hearing, Warren strongly criticized him for serving as a lobbyist for defense giant Raytheon before entering the Trump administration and asked him to adhere to a strict ethics pledge. Esper declined to adopt Warren’s ethics standards, which would have barred him from ever overseeing a Defense matter involving Raytheon, and he disputed the notion that “anybody that comes from the business or the corporate world is corrupt.”

In April Warren signed a letter from 10 Senate Democrats that criticized Esper for a “slow and disjointed response” to the coronavirus pandemic. In an unusually sharp rebuttal that was distributed publicly, Esper spokesperson Jonathan Hoffman said the letter “cherry-picked false and repeatedly debunked assertions that do not reflect reality.”