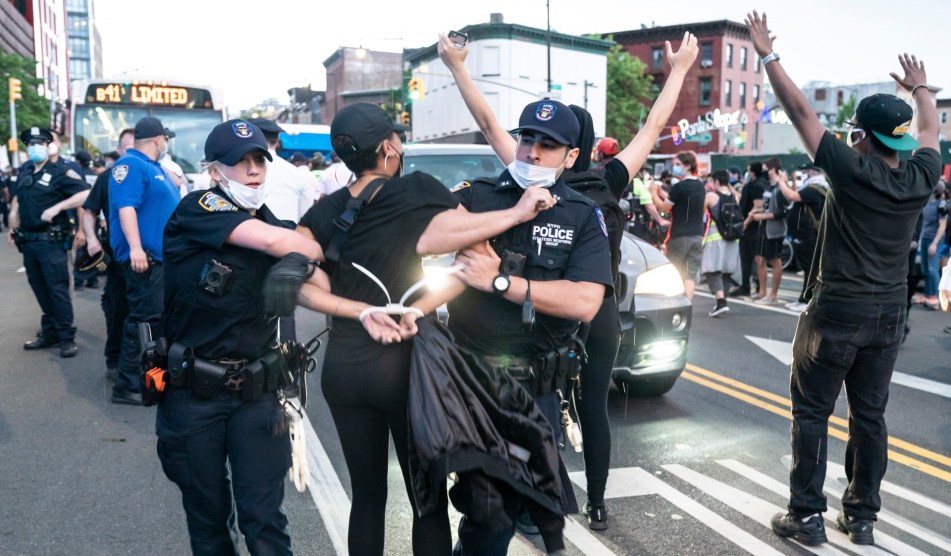 At protests of police violence across the country this weekend, police were—again—violent. In Salt Lake City, an armed officer pushed a man walking with a cane. In La Mesa, California, a woman peacefully protesting was shot in the head with a rubber bullet and went to the hospital. In Louisville, Kentucky, cops used tear gas during what a police official admitted was a “peaceful protest.”

And, in the aftermath, politicians felt the need to clarify: Violence is unacceptable. It cannot represent their city.

Instead, mayors across the country, straining to square their support for the cause with their distaste for the means and a need to placate powerful local interests, continued to press the case that “rioting” was strictly the purview of the protesters—and of outsiders, at that. It was the old canard about “outside agitators,” and in this case it was true in ways the politicos did not intend: Cops tend not to live in the city they police. They are the ultimate outside agitators.

In Raleigh, North Carolina—where a former mayoral candidate tweeted that she saw “kids get tear gassed”—the current mayor, Mary-Ann Baldwin, said in a statement that “a small number of people…showed up with the intention of inciting violence and chaos.” She is not referring to the police, who showed up with plastic shields, batons, and in an armored van. These protesters, she said, “do not reflect who we are as a city,” but presumably the cops who “shot rubber bullets at protesters and journalists” do. That latter detail is from the The News & Observer, which nevertheless noted in its headline that “looters” left “a trail of destruction.”

In Seattle, Mayor Jenny Durkan took a similar line. Praising the peaceful protests, she pivoted, swiftly, to say that “individuals who came to Seattle with the purpose of destruction” do not “define our city.” In a tweet the next day, she noted in a viral tweet that white men were at the center of violence in a viral tweet. Cops, she meant? No, of course not: She meant anarchists and opportunistic leftists, neither of whom were present, for instance, in this viral video showing cops smashing up a downtown storefront. It wasn’t an anarchist who maced a man trying to barge through a police line, nor was it an opportunistic leftist who “would throw a flash bang or tear gas just randomly into the crowd.” Those were cops.

Individuals who came to Seattle with the purpose of destruction: We will not let your chaos define our city. The escalated incidents that took place during today’s demonstrations cannot, and will not, be allowed to continue.

In New York City, when footage emerged of a police car mowing people over, Mayor Bill De Blasio said he was “not going to blame officers who are trying to deal with an absolutely impossible situation.”

Oh my god. What is the @NYPDnews doing? pic.twitter.com/rZayr421pJ

A line was drawn in Louisville, at least. Mayor Greg Fischer on Monday fired his police chief, Steve Conrad, after the shooting death of David McAtee, a beloved barbecue restaurant owner, during the protests. Two officers, who either were not wearing their body cameras or had not activated them, were placed on administrative leave. Conrad was set to retire later this month. Police had already shot a reporter with rubber bullets as she broadcast (for which they apologized) and fired tear gas before curfew into a crowd that “looked peaceful,” admitted a police official. None of that was deemed worthy of censure.

In Nashville, Mayor John Cooper said vandalism “does not represent our city.” But he doesn’t feel the need to call out a SWAT team who lobbed explosives at reporters.

Like his fellow mayors, Cooper also had the right message for the wrong people. “If you mean our city harm,” he tweeted, “go home.” Someone should put that on a protest sign.