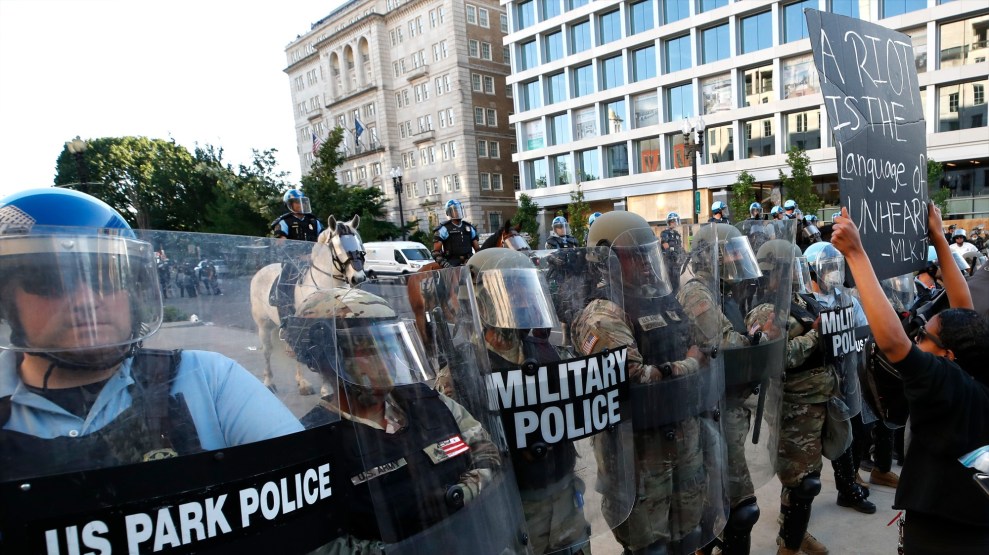 Police clear the area around Lafayette Park on June 1, as demonstrators protest the death of George Floyd.Alex Brandon/AP

For more than eight hours last night, Rahul Dubey sheltered and fed nearly 70 strangers in his Washington, DC, home—preventing them from being arrested after police surrounded the group of peaceful protesters in his leafy residential neighborhood.

It was the seventh straight day of demonstrations around the country following the killing by police of George Floyd in Minneapolis. After a weekend of chaos and violence—which included police attacking protesters around the country—DC Mayor Muriel Bowser had announced a 7 p.m. curfew in the District Monday. But before the curfew went into effect, federal law enforcement tear-gassed and attacked largely peaceful protesters in Lafayette Square, just north of the White House, so that President Donald Trump could stroll to the nearby St. John’s Episcopal Church—which had been damaged by fire in the previous night’s protests—for a photo op with a Bible.

Afterward, a number of demonstrators continued protesting in violation of the curfew, as police in riot gear attempted to break them up. A group of protesters marched north and, by 9:20 p.m., police had surrounded them near Dubey’s house, a little more than a mile from the White House. Mother Jones’ Ali Breland, Stephanie Mencimer, and Will Peischel documented the scene:

A resident in Swann just let a tin of protesters run through their house to escape the cordon as cops started moving in yelling “move on back.” pic.twitter.com/m66QkIE8Cj

stand off on 15th and swann that’s getting tense. they have paddy wagons or whatever you call them set up pic.twitter.com/RDdawJiHk7

Protestors on the outside of the police line collecting the names of those being arrested, ostensibly to arrange bail. pic.twitter.com/d8qCShi1hm

As police converged on the protesters on Dubey’s street, the 44-year-old businessman was sitting on his porch and quickly sprang into action, yelling for protesters to get inside his house. “It was a human tsunami,” he told the Washington Post. “I was hanging on my railing yelling, ‘Get in the house! Get in the house!” From about 9:30 p.m. until the District’s curfew expired at 6 a.m. Tuesday morning, Dubey housed dozens of protesters, even feeding them pizza. The police, meanwhile, camped out in front of his home, waiting to arrest anyone who left. Here’s footage of the scene inside Dubey’s house, from the Twitter feed of one of the protesters he took in:

They shot mace at peaceful protesters is a residential neighborhood. The man who took us in is named Rahul Dubey. He gave us business cards in case they try to say we broke in. pic.twitter.com/gKzmrvCa75

As the protesters left Dubey’s house Tuesday morning, they were greeted by a crowd of media and supporters, many of whom offered them rides home. Speaking with WJLA, DC’s ABC local affiliate, Dubey said that he hoped his 13-year-old son grows up to be like the demonstrators, adding that he hopes “they continue to fight and go out there peacefully today as they did yesterday and not blink because our country needs them…more than ever right now.”