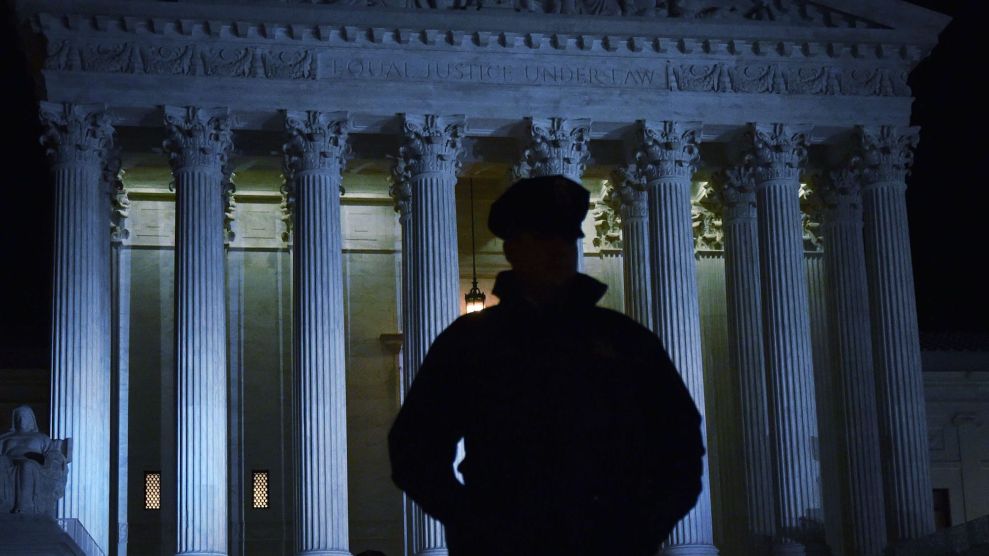 Update, June 15: After weeks of delay, the Supreme Court declined to hear all of the major cases involving qualified immunity on Monday. Justice Clarence Thomas, dissenting from the decision to deny Baxter v. Bracey, wrote that he had “strong doubts” about the Court’s qualified immunity doctrine. Meanwhile, a showdown is brewing in Congress, where the Justice in Policing Act, a police reform bill proposed by Senate Democrats in the wake of George Floyd’s killing, would abolish qualified immunity for law enforcement. Sen. Tim Scott (R-S.C.), who is leading Republican criminal justice reform efforts, called ending qualified immunity a “non-starter” on Saturday.

Since the late 1960s, police officers have enjoyed a special protection from civil rights lawsuits, including cases involving police brutality. But now, as law enforcement officers are responding to protests over police violence and racism by firing tear gas and rubber bullets and conducting mass arrests, the legal doctrine that has shielded them for decades is at last facing possible review by the Supreme Court and a serious challenge in Congress.

Civil liberties groups and legal scholars across the political spectrum say the doctrine, known as “qualified immunity,” makes it extremely difficult for victims and their families to hold abusive officers accountable. On Wednesday, Libertarian Rep. Justin Amash of Michigan and Democratic Rep. Ayanna Pressley of Massachusetts announced on Twitter that they would co-sponsor a bill to abolish qualified immunity and “restore Americans’ ability to obtain relief when police officers violate their constitutionally secured rights.” Democratic senators also joined the charge, with Sens. Kamala Harris, Ed Markey, and Cory Booker introducing a resolution calling to eliminate qualified immunity for law enforcement. Even presumptive Democratic presidential nominee Joe Biden has highlighted the need for change, telling the Philadelphia Tribune earlier this week that he supports reforming qualified immunity.

Meanwhile, the Supreme Court is considering a pile of petitions that involve questions about the doctrine. It is expected to announce by Monday whether it will take up a case challenging qualified immunity—a decision which could have major consequences for police accountability.

The concept of qualified immunity traces back to a 1967 Supreme Court ruling on a case brought by a group of black clergymen who had been arrested for using a whites-only waiting room at a bus terminal in Mississippi. The court ruled that, as government employees, the white cops could not be held liable for violating the clergymen’s civil rights—if they were acting in “in good faith” and believed what they were doing was legal. In 1984, the court expanded the protection it had established, ruling that government employees could not be held liable for violating someone’s constitutional rights unless their conduct violated “clearly established” law. According to University of California-Los Angeles law professor Joanna Schwartz, the Supreme Court considers the law to be clearly established only if a judge had previously found similar actions in a virtually identical case to be unlawful. “The hairsplitting regularly reaches absurd levels,” Schwartz explained in the Washington Post this week. “To avoid having their lawsuits dismissed, this week’s victims of police violence—and [George] Floyd’s family—would have to find cases in which earlier defendants were found to have violated the law in precisely the same way as the more recent cases.”

A Reuters investigation published last month found that since 2005, federal appeals courts have increasingly granted qualified immunity to police officers accused of using excessive force. In more than three dozen cases, officers whose actions had been deemed illegal by the courts were shielded from legal liability.

Yet both the Supreme Court’s most conservative justice, Clarence Thomas, and its most liberal, Sonia Sotomayor, have indicated dissatisfaction with the doctrine. Sotomayor argued in a fiery 2018 dissent that it tells officers “they can shoot first and think later.” Now, the high court is considering whether to take up at least eight cases involving questions about qualified immunity. Among them are several cases in which lower courts granted granted immunity to police officers who had been sued for excessive use of force or other civil rights violations, such as:

It’s not only cops who benefit from qualified immunity. In two more cases up for Supreme Court review, judges ruled that state medical board investigators couldn’t be held liable for searching medical records without a warrant, and emergency responders were immune for failing to deliver potentially lifesaving aid to an unconscious college student who was likely declared dead prematurely. There is also another case in which Texas cops who were denied qualified immunity are petitioning the Supreme Court to get it. In that case, the police shot and wounded a high school student they found holding a gun to his head.

The details of the congressional effort to repeal qualified immunity are still unclear, and what the Supreme Court will do if the justices do agree to take on the issue is anybody’s guess. “It’s easier for the court to make more modest changes to the direction of the doctrine, and it’s easier for Congress to take a big-picture approach,” explains William Baude, a law professor at the University of Chicago. But even if qualified immunity is abolished entirely and more police officers are held liable for abusive behavior, they likely still would not be held personally accountable for any financial damages. In a study of police misconduct settlements, UCLA’s Schwartz found that police officers paid only 0.02 percent of $730 million awarded to plaintiffs. The rest came out of local budgets.

Correction: An earlier version of this article misidentified the party affiliation of Libertarian Rep. Justin Amash.