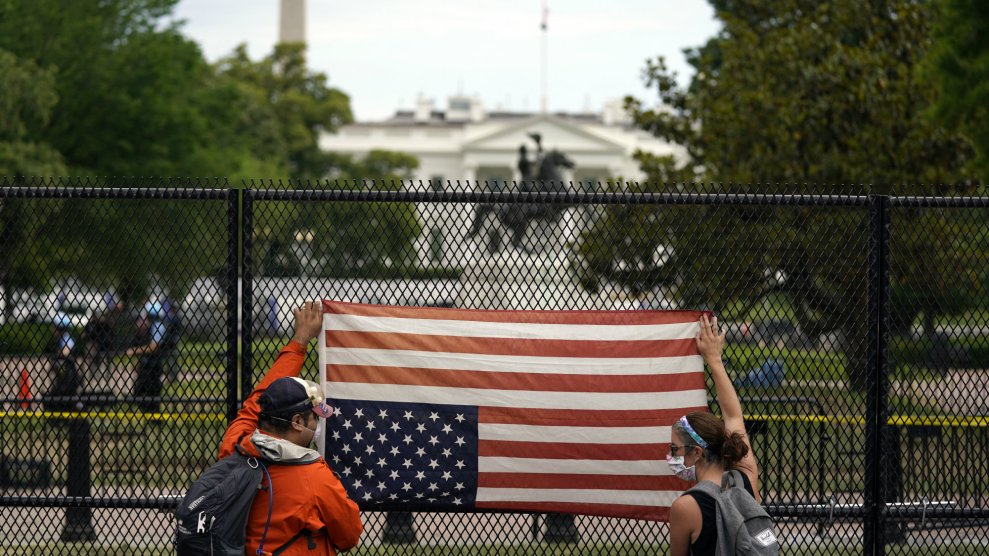 Yesterday afternoon, after protests and uprisings over police brutality had rocked the nation for nearly a week, President Donald Trump delivered a short speech from the Rose Garden. While he spoke ominously about sending the military into American cities, the sounds of peaceful protesters being tear gassed just two blocks away bled through television screens across the nation.

After his brief remarks, the racist president—in his first public appearance since CNN reported over the weekend that he’d been hiding in the underground bunker Friday night—left the White House and sauntered past the block where protesters had just been gassed. He headed to the historic St. John’s Episcopal Church, which suffered a fire during a particularly raucous evening in the nation’s capital. As he posed awkwardly with a Bible he has likely never opened, it became horribly clear that the President of the United States just gassed peaceful protesters for a photo op. Rev. Mariann Budde, told the Washington Post, “I am the bishop of the Episcopal Diocese of Washington and was not given even a courtesy call, that they would be clearing [the area] with tear gas so they could use one of our churches as a prop.”

The next morning, a local journalist regurgitated an anonymous statement from the US Park Police: There was no tear gas. Reporters on the ground and local priests countered that narrative, but the Republicans stuck with it. Some even went so far as to claim that time does not move forward. Washington, DC, like many other cities, had implemented a curfew that was set to begin at 7:00pm. The protesters were tear gassed at 6:35. Nonetheless, Sen. Marco Rubio (R-Florida) knew better, insisting that the protesters deliberately stayed out past curfew in order to get tear gassed.

Many in the media fell for the calculated & deliberate tactics of professional agitators.

They knew the street needed to be cleared before 7pm curfew.

But they deliberately stayed to trigger police action & get the story they wanted, that “police attacked peaceful protestors.”

The basic message from the one-time presidential candidate? The protesters manipulated time and you fell for it.

We’ve reached the who-are-you-gonna-believe-me-or-your-own-eyes phase of the uprising. And it’s not just Rubio. It seems as if everyone from the highest levels of government, to police officers, and randoms on Twitter are embarking on a campaign to make you feel as if you’re just imagining the widespread brutality raining down from the state.

It’s beginning to follow a very familiar pattern. In countless images and videos from all over the country, peaceful protesters who had been marching or chanting or simply standing with their hands in the air are met with excessive force. But then the police chief will go on television, usually with an able assist from an elected official, and declare that law enforcement was forced to deploy tear gas and pepper spray because the crowd was unruly.

On Sunday, a peaceful protester was pepper sprayed in the face and hauled away in Kansas City.

But wait! According to the Kansas City Star, the city’s police spokesperson Jacob Becchina said the man was arrested for “municipal/city protest-related charges.”

Maybe this campaign to get you to disbelieve what you’re seeing would feel less maddening if so many people weren’t willing to go along with it. Take this photo that depicts a police officer aiming some kind of gun in a child’s face.

But the replies. This is not a perfect example of an unnecessary display of force.  Some Twitter users took the opportunity to twist themselves into pretzels trying to explain all the completely normal reasons why a cop would threaten a child at a protest. The picture was probably photoshopped, or he’s not actually pointing the weapon at the child. How about looking at it from a different angle, you’ll see that everything is actually fine.

And that’s the problem and probably the point: The important illusion that if we just look at the chaos around us from a certain perspective, everything is fine. If we truly wrap our heads around the fact that police are terrorizing many communities all over the country, instead of protecting and serving them, then we’ll have to confront who and what American policing is for. And that might force us to see how much of it is broken, perhaps beyond repair. If that’s true, then what other institutions have we allowed to fester unchecked, wreaking havoc on the lives of the poorest and most marginalized among us? Education? Government? The Courts?

Maybe worst of all, if we have to challenge all these systems, we may be forced to also challenge ourselves.

No, it’s much easier to pretend everything is fine. And maybe time really can move backwards.