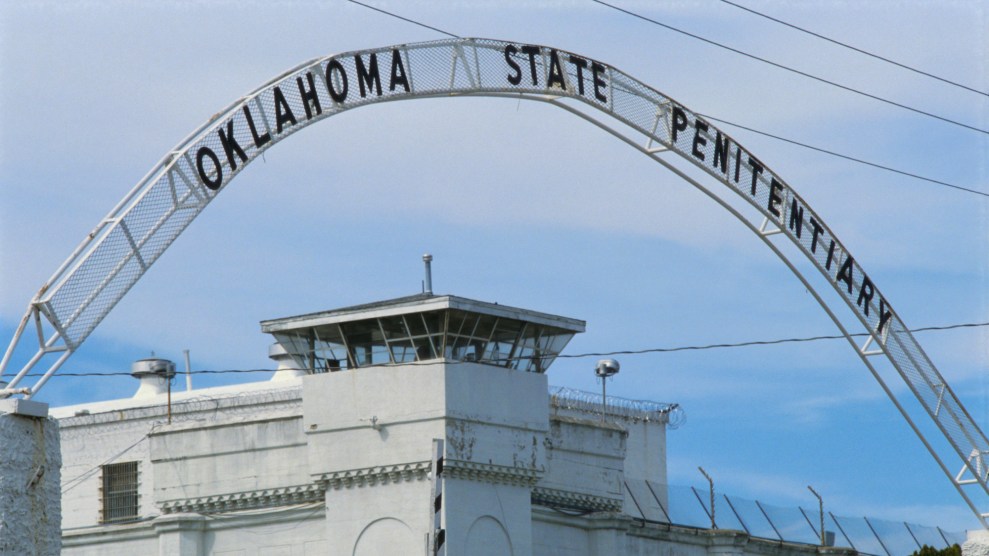 For the last four years, the fight against mass incarceration in Oklahoma has been a story of unlikely success. In 2016, after decades of creeping prison populations, the state’s incarceration rate reached levels so astronomical that the Prison Policy Initiative would dub it the “world’s prison capital“: More than 1 in 100 Oklahomans was locked up in a prison, jail, juvenile hall, or immigration detention facility. But that year, the same electorate that voted to send Donald Trump to the White House by a 36-point margin also approved a ballot measure softening their state’s notoriously hardline criminal code.

That measure, State Question 780, was a turning point. It downgraded drug possession and a slate of minor property crimes from felonies to misdemeanors, while a second measure ensured the money saved by downsizing prisons would go to rehabilitative programs. In 2017, 14,000 fewer felony charges were filed by Oklahoma prosecutors; not long after, the state’s prison population began to fall. Meanwhile, politicians took note of the message the voters had sent. In 2018, the state legislature, where Republicans hold a supermajority, passed more reforms, including streamlining the parole process. Republican businessman Kevin Stitt made reducing the prison population part of his pitch for the governor’s seat, and won.

This year, Oklahoma voters could send another jolt to the system by voting for State Question 805—another adjustment to the state’s harsh sentencing practices. If it passes, SQ 805 could reduce the prison population by 8.5 percent over the next 10 years, according to a projection by the Oklahoma Council of Public Affairs, a conservative think tank that supports the initiative.

SQ 805 would add a provision to the state constitution prohibiting prosecutors and courts from jacking up the sentences of people convicted of nonviolent felonies if they have an earlier nonviolent felony on their record. According to the No on 805 campaign, extra years in prison provided by these “sentence enhancements” are needed to hold “career criminals” accountable. Kris Steele, the Republican former state House Speaker who leads Oklahomans for Criminal Justice Reform, looks at crime differently: as the product of trauma, addiction, poverty, and a political culture that spent years trying to solve those problems with prison time. “We’re awfully quick to look at incarceration as a solution,” Steele, a Baptist minister, told Politico earlier this year. “It tears families apart, it creates instability. It makes the situation much worse.”

Under Oklahoma’s sentence enhancement system, someone with no criminal record who is convicted for possession with intent to distribute marijuana, for example, can be sent to state prison for up to 5 years, as Oklahoma Watch explains. But if they were convicted for an earlier nonviolent felony, enhancements will double their maximum sentence. For people facing other charges, this could mean life in prison.

SQ 805 would stop courts from imposing those longer sentences on anyone with a nonviolent prior conviction within the last 10 years. It’s also retroactive, meaning that people already serving lengthened terms because of the old law—about 8 percent of the state prison population—could seek a sentence reduction.

But there’s a significant wrinkle threatening public support for SQ 805, and in turn, Oklahoma’s slow but steady progress against mass incarceration: The measure distinguishes violent from nonviolent felonies using an outdated list from Oklahoma’s legal code. As of January, that list of “violent” crimes did not include certain domestic violence charges, such as domestic abuse by strangulation, or domestic assault with a dangerous or deadly weapon. If SQ 805 passes, it would continue to allow courts to impose enhanced sentences for any crimes on that list as of January 1, 2020—including assault and battery, murder, rape, child abuse, and so on—but not those domestic violence charges. (Oklahoma lawmakers added some domestic violence charges to the violent felonies list in May, too late for SQ 805’s cutoff date.)

These loopholes have drawn fire from a range of organizations that provide services to survivors of domestic violence, including the Oklahoma Coalition Against Domestic Violence and Sexual Assault. Candida Manion, the coalition’s director, has argued that the measure could exacerbate violence. “When abusers aren’t held accountable, the violence escalates and that’s when they end up killing someone,” Manion told Oklahoma Watch in February. “In Oklahoma, we don’t hold offenders accountable already, but whatever was there, this [SQ 805] will remove that, making it worse.” Meanwhile, the No on 805 campaign has close ties to victim advocates; it’s chaired by Tricia Everest, the president of board of directors for Palomar, the family justice center of Oklahoma City, which provides support to survivors of domestic violence.

Predictably, law enforcement officials who have opposed criminal legal reform have picked up on the argument that the ballot measure will hurt survivors. “SQ 805 would take away the ability of the District Attorneys, the courts, and even juries, to lengthen sentences for repeat offenders of so-called ‘non-violent’ crimes,” wrote Jason Hicks, the president of the state’s District Attorneys Association, in a January op-ed. “This means Oklahomans could expect someone who has repeatedly beaten or strangled an intimate partner to spend very little time in prison before being released to again endanger lives.”

The No on 805 campaign has focused much of its messaging on domestic violence as well as a range of other crimes that don’t appear on the state’s violent felonies list. One ominous ad from the campaign opens with a “viewer discretion advised” notice and shows the mugshot of a Black man it describes as a “habitual violent criminal.” It claims the initiative will allow “child predators” and “armed home invaders” as well as “violent abusers” on “our streets.”

But SQ 805’s supporters include some survivors and victim advocates. “As a domestic abuse survivor, I cannot sit quietly and be used as a political pawn by people in power,” Jacqueline Blocker, community engagement director at Oklahomans for Criminal Justice Reform, wrote in a rebuttal to Hicks. “Most victims are not receiving the support they need to recover and heal from domestic violence, and long prison sentences are diverting scarce resources away from vital trauma recovery programs and victims’ services.” Molly Bryant, a victim advocate in Tulsa, drew attention to the high numbers of female survivors in prison in Oklahoma, which as of 2018 was the nation’s top incarcerator of women. “I have worked with survivors who were sentenced to prison for protecting themselves from their abusers or fighting back, but the most common reason women end up in prison in Oklahoma is for drug possession, which is a common coping mechanism to abuse—a way to dull the pain and escape a traumatic reality,” Bryant wrote last month. “SQ 805 would prevent them from sentence enhancements for past crimes of survivorship like drug possession or even fighting back after years of taking the abuse.”

Proponents of SQ 805, such as Allen Grubb, a district attorney outside of Oklahoma City, also argue that courts could still take someone’s criminal history into account to impose stricter sentences for perpetrators of domestic abuse. And if legislators really wanted, they could still pass laws to increase the maximum sentence for domestic violence charges, Ryan Gentzler, director of the Open Justice Oklahoma project at the Oklahoma Policy Institute, pointed out in a blog post earlier this month.

It’s unclear how much the argument about domestic violence has shifted public opinion in Oklahoma and what it means for SQ 805. Over the last few years, the most effective arguments for criminal legal reform in the state have invoked the moral claim that locking so many people up is just not right, as well as the fiscally conservative argument about saving tax dollars by shrinking the prison system, Gentzler says. (The Oklahoma Council of Public Affairs estimates SQ 805 could save up to $186 million over the next decade.) But on top of that, the issue of mass incarceration is personal for large numbers of voters. “A big portion of the population knew somebody who had been struggling with with addiction, saw our incarceration numbers go up, saw people not get better, and had a family member that that wasn’t getting the help they need,” Gentzler says. “The justice system has touched an enormous portion of our population, just by its scale.”