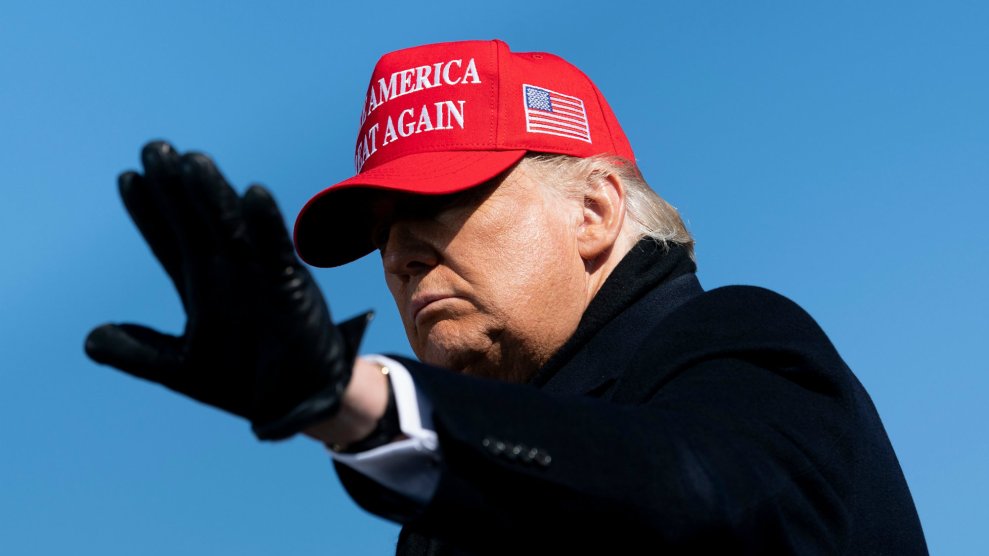 Last week, as President Donald Trump was mounting more meritless court challenges to the election he had clearly lost, Orlando Hall was executed at the federal prison in Terre Haute, Indiana. The day after his execution, which was the first carried out by a lame duck president in more than a century, the administration announced that it would be doubling down on its killing spree: Another three inmates would be executed in the weeks leading up to President-elect Joe Biden’s inauguration, bringing the total number of inmates scheduled to die during the lame duck session to six.

As I have often noted, Trump loves the death penalty. In 1989, he took out several ads in New York City’s papers to call for the execution of five Black and Brown teenagers who’d been falsely accused of raping a woman in Central Park. As president, he championed capital punishment for mass shooters, drug dealers, and cop killers. Then last year, almost as if to satisfy his appetite for the death penalty, the Department of Justice announced that after a nearly two-decade hiatus, the federal government would begin executing inmates. “We owe it to the victims and their families to carry forward the sentence imposed by our justice system,” Attorney General William Barr said at the time. The first execution was carried out in July at the federal prison in Terre Haute, Indiana, and was quickly followed by six more. As Barr continued to schedule death for inmates, one detail kept nagging at me: Trump did not appear to care as much as I thought he would.

As Barr continued to schedule death for inmates, one detail kept nagging at me: Trump did not appear to care as much as I thought he would.

According to the New York Times, Trump has spent the last three weeks not doing much more than tweeting incessantly. Even for him, 550 tweets since Election Day was notable. But nowhere in the barrage were references to his administration’s spate of executions. Compulsively tweeting like a bored teenager has been Trump’s style throughout his White House tenure. Sometimes, the tweets actually had real consequences, like when aides and department heads find out they’ve been fired via Twitter. Other times, they are the pointless rants about his favorite old subjects: Lying about losing the popular vote in 2016 because of massive fraud,  putting Hillary Clinton and Barack Obama in jail, being a great president for Black people, COVID-19 is not a big deal, owning the libs. His administration has explained that his account offers him direct access, a way to speak personally to his supporters and the American public.

At the same time, Trump has also spent years presenting himself as the law-and-order president. When far-right and extremist protesters descended upon Charlottesville, Virginia, and one killed Heather Heyer, a 32-year-old counter-protester, Trump said there were “very fine people” on both sides. But after the death of George Floyd in Minneapolis this summer sparked a nationwide protest movement, Trump responded by tweeting violent messages at protesters, defending police officers (even the ones caught on tape abusing their power), and shrugging off violence committed by his own supporters. In the world of Trump’s tweets, misdemeanors of throwing water bottles at police officers or toppling Confederate statues were a criminal assault on American society itself and should be punished with prison time—or worse. So why, when the DOJ has been dutifully carrying out the very punishment that Trump seems to like best of all, has the president remained mostly silent on the issue?

It’s bothering me that he’s not bragging about the escalation of the lame-duck executions. If we’ve learned anything about our president’s character over the last four years, it’s that Trump loves to take credit for policies or victories, even if they have nothing to do with him, like the time he took credit for health care for veterans improvements that began under Obama.  The execution spree seemed tailor-made for such a moment. The president could use his administration’s rush to kill inmates as a way to truly show off his tough-on-crime bonafides. “No president has ever dared to kill this many criminals,” I can practically hear him saying smugly from the Rose Garden. “Thanks to your favorite president,” he would tweet, “the victims of these crimes finally saw justice.” Or maybe something even more macabre. “Great execution carried out by my team in Terre Haute,” the tweet might read. “Looking forward to a few more!” Anti-death penalty activists would decry this celebration of death, but his strongest supporters would once more adore his red meat style of sayin’ it like it is. It’s the quintessential Trump move: appearing strong while inflicting misery on the weakest and most marginalized among us.

But that’s not what’s happening. While advocates have loudly and forcefully condemned the president and the administration for going where none of their predecessors have gone before, Trump himself has said little as the machinery of death grinds on.

AG Barr just set three more federal execution dates in addition to the two already scheduled in December. The federal government just executed Orlando Hall last night. If Barr gets his way, six people will be executed between Election Day and Inauguration Day. This is a disgrace.

Plus, the death penalty is more unpopular than ever, and 21 states and Washington, DC have abolished the practice completely. Between 1963 and 2003, there were only three federal executions, all of them occurring during George W. Bush’s first term. Compared to the 1990s, when support for the death penalty hovered around 80 percent, there simply isn’t that much appetite today due to a confluence of factors including the death penalty’s arbitrary nature, the questionable effectiveness of many of the drugs, and its racist impact on nonwhite defendants.

If Trump isn’t going to use the executions as a chance to thump his own chest, and the public isn’t exactly clamoring for more state-mandated killings, what’s the point?

If Trump isn’t going to use the executions as a chance to thump his own chest, and the public isn’t exactly clamoring for more state-mandated killings, what’s the point? The answer appears to be something even more deeply immoral: Because they can. The rarity of federal executions wasn’t necessarily a bold statement, but rather a norm we’d grown accustomed to. No one ever considered what would happen when someone who didn’t care about those norms seized power.

Adam Serwer of The Atlantic summed it up in 2018, “The cruelty is the point.” Even by the sub-basement-level standards required to judge Trump, it seems both exceptionally cruel and exceptionally arbitrary to execute inmates after more than 80 million people have rejected your agenda. The Trump administration had four years to execute inmates. The timing here of Trump ramping up the death machine on his way out the door, knowing that the next administration is going to work to end the practice, is appalling—humans are quite literally being sacrificed at the altar of owning the libs.

“Nobody’s ever done a better job than I’m doing as president,” Trump told journalist Bob Woodward in 2018. Despite the overwhelming evidence to the contrary, Trump sees himself as a trailblazer, pushing an agenda that other presidents could only dream of. In reality, Trump is the first president to have this trifecta of accomplishments: to be elected without winning the popular vote, then impeached, and then losing his re-election bid. Now, if all of these executions are carried out, Trump can add first president to put 13 federal inmates to death, to his list of dark accomplishments.