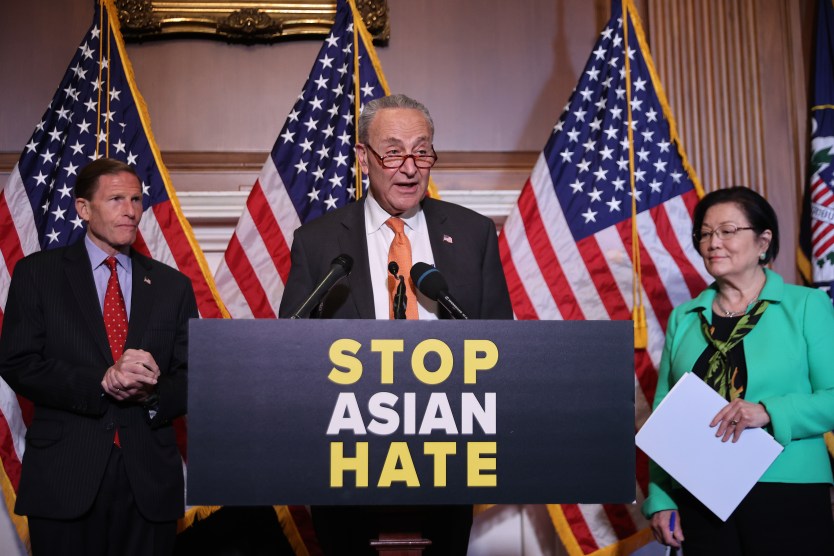 In the wake of the white supremacist massacre of nine Black parishioners at Charleston, South Carolina’s historic Emanuel African Methodist Episcopal Church, the Anti-Defamation League pushed to expand the country’s hate crime laws, which enhance criminal penalties for identity-based violence. “Now is the time to bring strong hate crime laws to all 50 states—including South Carolina and Georgia, which lack them entirely,” ADL head Jonathan Greenblatt said at the time.

The ADL was partly successful. Of the five states without hate crime legislation on the books, two added them; others expanded existing laws. But for some, this was anything but progress. Advocates for marginalized groups have sounded the alarm on hate crime laws for decades, saying they not only fail to prevent bigoted violence but harm some groups they’re supposed to protect.

That debate stretches beyond the question of whether hate crime laws are “effective,” said Senthorun Raj, a scholar of gender, sexuality, and law at England’s Keele University. The institutions that mete out punishment, Raj said, are the same ones that “marginalize LGBT people, or racial minorities, Black folks, Indigenous folks—do we trust these authorities to actually remedy the violence that they’ve been complicit in perpetrating?”

The question became newly urgent in March, when a gunman killed eight people, including six Asian women, in a string of shootings at Atlanta-area spas. Investigators typically rely on proof that a person’s violence was motivated by bias when filing hate crime charges, and some, including Rep. Judy Chu (D-Calif.), say the evidence is already there. Chu cited the distance between the spas to suggest that the shooter targeted people based on their race and gender. While investigators have yet to bring hate crime charges, Georgia officials told the AP last month that they haven’t ruled it out. The Atlanta killings could be the first test of Georgia’s new hate crime law, passed after the killing of Ahmaud Arbery, a Black man shot by two white men while he was out jogging.

Georgia’s law wasn’t passed without controversy. At one point, Republicans attached an amendment that would have extended its protections to law enforcement and first responders. (The ADL’s 2015 campaign also included a goal of advancing police–community relations.)

High-profile cases often drive hate crime laws. On Thursday, the Senate approved the COVID-19 Hate Crimes Act in response to violence targeting Asian Americans during the pandemic. The law would expedite the federal government’s review of hate crimes related to the pandemic. It would also give state and local law enforcement more guidance on tracking hate crimes. One amendment would boost resources to train law enforcement on responding to hate crimes. The bill is likely to pass in the House and will then head to Biden’s desk.

The most recent hate crimes bill passed at the federal level is the Matthew Shepard and James Byrd Jr. Hate Crimes Prevention Act, which followed homophobic and racist attacks in the late 1990s that drew major media attention. Less than a decade after that bill was enacted, the Justice Department boasted that it had charged more than 300 people with hate crime offenses—even as the hate crime rate didn’t see any significant change from 2004 to 2015.

Compared with the structural violence many of these communities face, hitting a few hundred people with hate crime charges barely seems to scratch the surface. “For most people, the hate crime legislation will never be relevant to their lives,” Raj said. “It might affect a handful of cases or a handful of people. But most people’s experience of homophobia, transphobia, racism, and so on, is going to be far more layered, far more complicated, and actually often happens as a result of state action.”

Raj cited the criminalization of gender-affirming healthcare as an example. Azadeh Shahshahani, an attorney with abolitionist group Project South, offered anti-terror laws as another example of state-sanctioned, identity-based violence.

“We definitely have seen for many years how these laws have been used to target Black, brown, and Muslim people in terms of pre-emptive prosecution and opening the door to state surveillance,” she said.

And, of course, there’s policing. The record of hate-fueled acts committed by police has limited support among LGBTQ people and people of color for any measures that might enhance the powers of the criminal legal system. Many marginalized people haven’t or wouldn’t turn to law enforcement in the wake of identity-based attacks.

The National Coalition of Anti-Violence Programs found that in 2015, 41 percent of LGBTQ survivors of hate violence reported the incidents to the police. In the majority of those cases, survivors said officers were hostile or indifferent by using slurs, physical violence, and other forms of abuse. A 2014 report also noted that transgender survivors were six times more likely to experience physical violence from police than other survivors when reporting.

In 2020, hate crimes reached their highest levels in more than a decade. But not counted in that figure was police brutality often aimed at Black Americans. Between 2015 and 2020, Black people in the U.S. were shot dead by police at a rate three times higher than white people were, according to a study in the Journal of Epidemiology and Community Health. As the trial of George Floyd’s killer, former Minneapolis cop Derek Chauvin, unfolded nearby, a police officer shot and killed 20-year-old Daunte Wright in Brooklyn Center, Minnesota.

In a conversation with the Asian American Writers’ Workshop, sociologist Tamara Nopper pointed out the benefits that flow to the police when they’re tasked with responding to hate-fueled incidents.

The current hate crime framework rests on two premises. The first is that the prospect of additional punishment might serve as a deterrent. This is a dubious proposition. “Nobody says, ‘I’m not going to do this, because I know if I get charged with a Class B whatever, it’s going to get escalated,’” said Leo Ferguson of Jews for Racial and Economic Justice, a nonprofit that’s part of the NYC Against Hate coalition. “That is not in the mindset of the people who are committing those kinds of crimes.”

The other premise is that by extending protections to more identities and ramping up police training on hate crimes, legislators and advocates send a signal to marginalized communities that they’re valued in society. Brendan Lantz, director of the Hate Crime Research and Policy Institute at Florida State, said hate crime laws are important “not just because of some idea of justice,” but for their symbolic value. “Quite honestly, they’re very rarely used,” he said. “But one of the functions of hate crime laws is that they send a message of societal condemnation towards the victimization of marginalized communities.”

But the symbolic function of hate crime laws is rooted in a view of state-sanctioned violence as a—or the—legitimate answer to bigotry. Ferguson recalled an incident in which a 14-year-old boy chalked a swastika on a playground in Queens. New York cops “arrested him and posted this triumphant post about zero-tolerance policies on Twitter,” Ferguson said. “And I just remember looking at that tweet. That was this moment where I was like, this does not make any sense…this is not what a solution to this problem looks like.”

Groups like the Sylvia Rivera Law Project and the Audre Lorde Project argue that solutions lie within communities, not in prisons, through projects like mutual aid and racial and ethnic education. This type of organizing also emphasizes education about intervention and supporting survivors of violence. The ALP’s anti-violence program, known as “Safe OUTside the System,” meets via Zoom every few weeks and offers educational resources on de-escalation techniques and documenting police violence.

Many larger and better-funded advocacy groups, like the Human Rights Campaign, the National Gay and Lesbian Task Force, and the Education Fund, have favored hate crime laws. But perhaps most critical was the Anti-Defamation League, according to Jeannine Bell, a professor at Indiana University’s law school who studies policing. She noted that the ADL wrote model hate crime legislation that wound up being adopted in several jurisdictions.

In her research, Bell has looked into small groups that work on addressing hate in their communities and often oppose hate crime laws—and she’s found that mediation is often burdensome.

“Imagine working with someone and having them around your small, community-based office, [someone who] hates people who are like you in some fundamental way, to teach them a lesson for hours on end,” Bell said. “Victim-offender programs, mediations in hate crime cases—you know what? It’s a fundamental tenet of mediation that you need to have equality among mediating partners. So you have a bigot and their target. Where is the equality there?”

Still, much of the work of small community groups is aimed at preventing bigoted attacks—exactly what hate crime laws haven’t been shown to do. Drawing lessons from the NYC Against Hate coalition, the Asian American Federation has launched a campaign to establish safe zones, provide training in de-escalation strategies, and offer reporting tools on apps used by Asian communities, like WeChat and WhatsApp.

Jo-Ann Yoo, the group’s director, said they’re working around the clock to create resources to help themselves and others.

“We live in a country where someone else is going to be targeted next,” she said.

But legislators remain hungry for hate crime laws. The COVID-19 Hate Crimes Act enjoyed near unanimous support in the Senate, with Sen. Josh Hawley (R-Mo.) the lone dissenter. In South Carolina, one of the only states without a hate crime law, lawmakers are considering a comprehensive hate crime bill that includes protections for LGBTQ people. And in Massachusetts, two state legislators worked with the attorney general to revise the current hate crime law, writing in the Boston Globe that “criminal prosecution is only one tool in the fight against hate.” For many in the groups these legislators mean to protect, the efforts are only giving tools to all the wrong people.