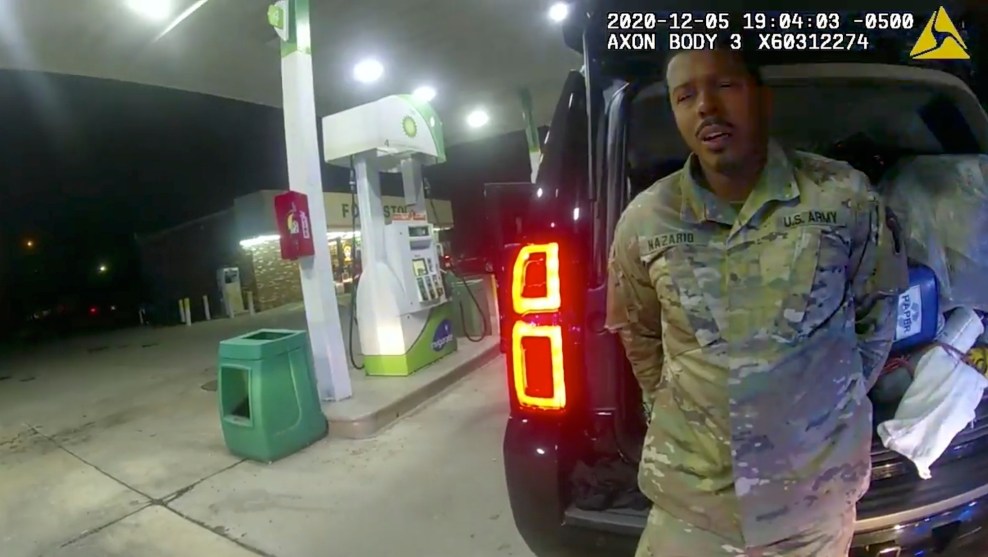 Caron Nazario, a second lieutenant in the U.S. Army Medical Corps, after he was pepper-sprayed by police during a traffic stop in Windsor, Virginia, on Dec. 20, 2020, from newly released body cam video. Windsor Police via AP

Caron Nazario, a Black and Latino second lieutenant in the U.S. Army Medical Corps, was coming home from work when he was stopped by two police officers in Windsor, Virginia, pepper-sprayed, assaulted, and subjected to death threats, according to highly disturbing video footage that is now the subject of a federal lawsuit.

Nazario was driving along U.S. Route 460 on December 20, 2020, when he was stopped for allegedly not having a rear license plate on a newly purchased Chevy Tahoe. (The temporary plates were taped to the inside of a rear window on the passenger side.) When he pulled over at a nearby BP gas station, two police officers pointed their guns at Nazario, who was dressed in uniform, and told him to step out of the vehicle.

“What’s going on?” the 27-year-old Nazario asked the officers.

“What’s going on is your fixin’ to ride the lightning,” responded officer Joe Gutierrez, apparently making a reference to an execution by electric chair.

“I am honestly afraid to get out,” Nazario said.

“Yeah, you should be,” responded Gutierrez. “Get out!”

“I have not committed any crime,” said Nazario, who had his hands up but was afraid to exit the vehicle.

“You’re being stopped for a traffic violation and you’re not cooperating,” Gutierrez shouted. “At this point right now you’re under arrest, you’re being detained for obstructing justice.”

Gutierrez and a second officer, Daniel Crocker, then attempted to force Nazario out of the car. “Get your hands off me,” Nazario said. “I didn’t do anything.…This is not how you treat a veteran. I’m actively serving this country and this is how you’re going to treat me?”

A lawsuit filed on April 2 by Nazario in federal district court in Virginia alleges that the officers violated his First and Fourth Amendment rights.

“These cameras captured footage of behavior consistent with a disgusting nationwide trend of law enforcement officers, who, believing they can operate with complete impunity, engage in unprofessional, discourteous, racially-biased, dangerous, and sometimes deadly abuses of authority,” the lawsuit states.

The footage has sparked an outcry on social media, widely circulating at the same time that Minneapolis police officer Derek Chauvin is on trial for murdering George Floyd.

Here is the full video. How many incidents have there been like this just in the last year?

The lawsuit can be found here: