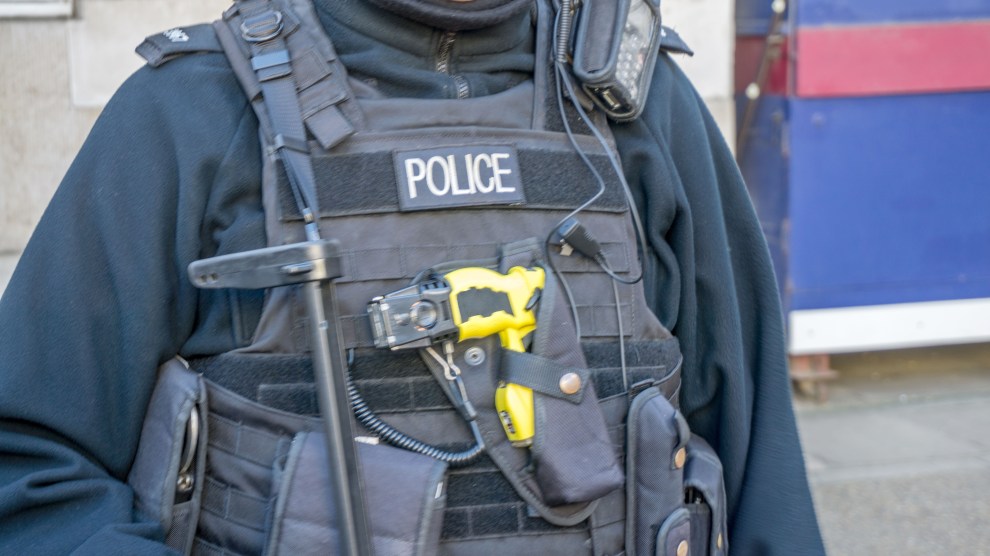 On Monday, Brooklyn Center Police Chief Tim Gannon said he believed the fatal shooting by police of Daunte Wright, a 20-year-old Black man, was not intentional.

In body-cam footage, Officer Kim Potter points what she said was a Taser at Wright, during an arrest in a Minneapolis suburb. But she had actually grabbed her gun, and when she fired at Wright at very close range, it was a bullet that struck him in the chest, not electric volts. “Taser! Taser!” she yelled. And then: “Holy shit! I just shot him.” Gannon concluded Potter, a 26-year veteran of the department and former police union president, had mistaken her gun for a Taser.

“This appears to me, from what I viewed and the officer’s reaction and distress immediately after, that this was an accidental discharge that resulted in the tragic death of Mr. Wright,” he said at a press conference.

Potter’s argument that she only meant to tase Wright has raised eyebrows. Wright’s sister, Diamond Wright, doesn’t believe the claim. “You don’t accidentally grab something and point without knowing. Not true,” she told ABC News.

“The question is: Was it an accident? Was it intentional? That remains to be determined by a full-blown investigation,” President Joe Biden said in the Oval Office on Monday, referring to the killing as “tragic.” Wright was shot about 10 miles away from the location where former Minneapolis police officer Derek Chauvin restrained and killed George Floyd last May by kneeling on his neck.

Even if Wright’s shooting was an accident, as Potter claims, shouldn’t police officers at least have better training to avoid this outcome? This is not the first time a cop has claimed she meant to fire her Taser and instead shot her gun. To understand how often this so-called “weapons confusion” occurs, I called up Gerald Takano, a retired police officer in Raleigh, North Carolina, who has studied the problem extensively and is a use-of-force expert. Years ago, he developed a training program to help officers in his state avoid the mistake, but he says most police departments around the country have not done the same. “There’s no reason to believe it’s going to diminish until it’s addressed systemically, nationwide,” he says of these shootings.

The police officer who killed Daunte Wright says she accidentally reached for her gun when she intended to use her Taser. How common is that kind of mistake?

More common than we’d like it to be. Generally you only see it in the news when it becomes a shooting. But if you think of that as the tip of the iceberg, then the number of times it comes close, where the officer grabs the wrong tool but doesn’t fire it, or even touches the wrong tool unintentionally, that occurs on a larger scale. But where a person is actually shot, that occurs on average about once a year, looking back from 2001 to now. This one makes the 18th that I could identify.

What are some of the cases that got a lot of attention?

In April 2015 there was a reserve deputy for the Tulsa County Sheriff’s Department, and the suspect ended up jumping and running, and you can hear the deputy saying, “Taser,” and then he accidentally fired the gun. And he said, “Oh! I shot him! I’m sorry!” And he was actually found guilty and was sentenced to some years in jail.

Probably one of the earliest cases that was very, very noteworthy happened in California on the BART train station area in January 2009. Johannes Mehserle was the officer’s name. You can see him slowly withdraw his firearm and discharge his firearm into Oscar Grant‘s back while the suspect was handcuffed. You see him back away, put his hand on top of his head, like, “Oh my God. What have I done?” And later he would claim weapons confusion on that one too. He was found guilty and sentenced to a couple years in jail.

More recently, you had a female officer in Lawrence, Kansas, that made the news. They’re wrestling with a suspect over some minor offense, and she pulled out her gun and shot him. She was charged, but she never went to trial. She resigned. That was in 2018, and you had a couple more instances in 2019. And then you had a Georgia officer, in 2017, who shot a young teenager while trying to arrest him. That was on video, too, where he fires his gun and you hear him go, “Oh my God. God dammit.” And then, “I shot him.”

What are the causes that lead to officers mistaking their guns for tasers?

It’s not “causes”—it’s just a simple root cause: It’s because they designed the Taser like a gun in order to take advantage of the firearms training that officers do. But the problem is there’s two different justifications for use of a gun and use of the Taser: a threat of deadly force for a firearm, and at least an active resistor for justified use of a Taser, by which I mean someone who’s assaultive or imminently assaultive toward the officer. And the problem is the body is used to doing one thing—for lack of better word, like muscle memory—and when you have two similar types of skills, the more dominant one will tend to take over, especially under higher degrees of stress. That’s what we call a “capture error,” when an intended response does not happen because a stronger, similar other response occurs instead. The officer will have a mental intention of drawing a Taser but have the physical response of drawing the gun.

It’s not “causes”—it’s just a simple root cause: It’s because they designed the Taser like a gun in order to take advantage of the firearms training that officers do.

Has Axon, the manufacturer of Tasers, considered redesigning its products so they don’t resemble guns?

They did come out with different colors, like a bright yellow. And it’s also weighted differently. But the officers don’t see the tool because they’re focused on what the other person is doing. And we want them to focus on the bad guy’s behavior, deciding what level of noncompliance they have, and if there’s immediate action needed for that type of resistance. So with the different colors, it just doesn’t work at all. They don’t see it.

You can look at the video. It’s clear she had a gun in her hand, but she doesn’t see the gun. She’s looking at what the guy is doing and trying to clear the other officer out of the way. That’s why she yelled, “I’m gonna Taser!” Then you heard the word, “Taser, Taser, Taser.” She’s trying to make sure no other officers are in the path of the Taser dart. If it were not shaped like a gun altogether, it would help. But the color of the Taser doesn’t matter, and the fact that it’s plastic doesn’t matter, in my opinion, because it’s a training error.

What kind of training error?

It’s the difference between how many times we draw and fire a gun versus how many times we draw and fire a Taser. I’ve done studies about how much training you need in order to reasonably differentiate between the two. And it’s not a single time or two times of training; it’s multiple training sessions over a period of days. And it has to be done for however long you have your firearm, because every year the officers are training with firearms disproportionately to their Tasers. In my opinion, that’s been a very weak point in the training of Tasers nationally, because most departments will do a one-day training.

One day of training for Tasers? That seems incredibly quick.

Yes. That is the norm. And the in-service training is usually less.

Axon doesn’t tell agencies how to train or what justification is needed to use Tasers. They leave it up to the individual departments. But somewhere around the early 2000s, the company suggested “Hey, put the Taser”—they call it “cross draw”—on the opposite side of your body from your weapon.” Because for the first several incidents of weapons-confusion shootings, the officers had the Taser on the same side of the body as the gun. And they suggested, “Hey, by moving the holster over to the other side of the body, that would reduce the likelihood of weapons confusion occurring.” But it has not reduced it.

With the different colors, it just doesn’t work at all. They don’t see it.

In a study we tracked the error rate: That means that if they flinched, moved, touched, or drew the wrong tool, we noted it.

By in-service training, do you mean repeat training for officers who’ve been with the department for a while?

Yes. For Tasers, the manufacturer recommends a certain amount of minimal training, which means firing off two cartridges, which means squeezing the trigger twice. Plus sitting through some refresher classes and drills. But I’m gonna tell you how capture errors work: I guarantee you that most states require officers to go through yearly qualification for firearms, which generally run around 50 to 100 rounds a year. And they’re required to do other firearms training too, which means they’re probably drawing and squeezing their gun over a couple hundred times a year. So remember, it’s about differentiations and repetitions: If I’m doing my gun 200 times a year and I’m doing my Taser two times a year, are you improving or making it worse? The numbers tell us it’s making it worse. The most people likely to have capture errors are the ones who had the most disparity—so firearms instructors, SWAT guys, guys who practice a lot with their firearms.

Sometimes people will say, “How can a person mistake a Taser for a gun?” I’m telling you, it’s very easy to do under stress unless they’re trained not to do it. And so in absence of not training them not to do it, you’re creating an environment for it to happen unintentionally.

This interview has been condensed and edited for clarity.