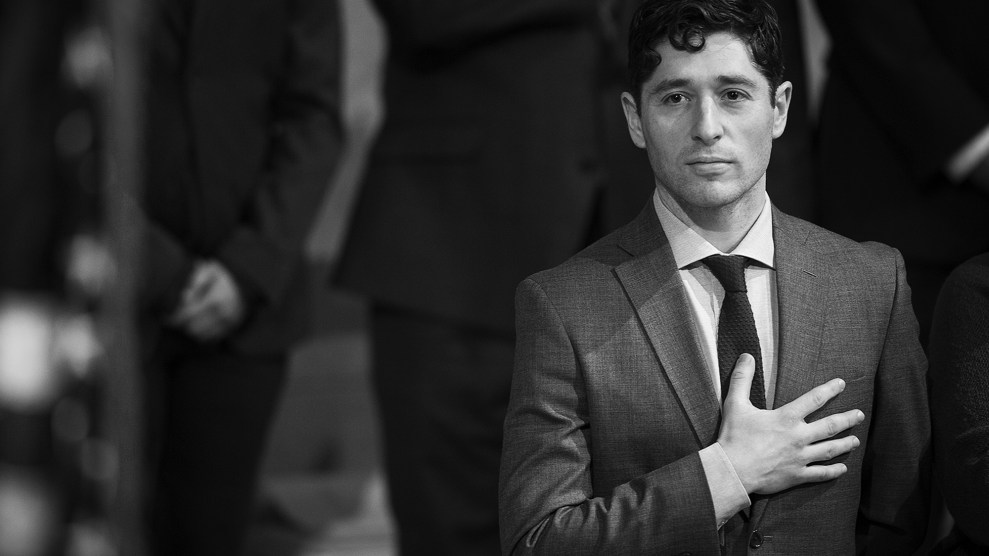 Ever since a police officer murdered George Floyd last year, Minneapolis has been the epicenter of a national debate about how much money police departments should get from city budgets. In recent months, Black-led organizers in the city and elsewhere around the country have convinced their local governments to shift at least some funds away from cops and funnel them toward other services like health care and education. But now they face a new challenge: Joe Biden. Concerned about rising gun violence nationwide, the president wants mayors to spend a chunk of federal coronavirus relief money on police officers. And in Minneapolis, city officials appear to be listening.

In July, the Minneapolis City Council approved a spending plan by Mayor Jacob Frey for the first wave of American Rescue Plan funding, federal money that’s meant to help states, cities, and tribal governments respond to the COVID-19 crisis and bring back jobs. Out of the $90 million allocated for 2021 in Minneapolis, more than $4.5 million will go to the police department. Another $4.5 million total will go to the police over the course of the following three years, out of about $11.7 million allocated already for that time period. (Less than half of the city’s total American Rescue Plan funding has been allocated so far; some of the money won’t be available until later.)

Frey said he listened to community members who wanted him to prioritize assisting people who were hit hard financially because of the pandemic. A majority of the city’s American Rescue Plan funds in 2021—about $65 million—will go toward housing support and economic rebuilding. “They’re arguing that these moneys should be allocated to helping those that are struggling most, and they are,” he told me.

But to defund-police organizers, spending more than $9 million of relief money on the police means propping up the racist enforcers of immiseration, while missing a chance to help even more people with housing, employment, and health care. “Minneapolis, a year after the murder of George Floyd, has not seen any changes to the way we do policing or public safety,” said Sheila Nezhad, an activist with the grassroots group Reclaim the Block who was among the first to raise the alarm about the allocation of coronavirus relief. She’s campaigning to unseat Frey as mayor in the November election. “He’s continuing to funnel money into a murderous institution.” 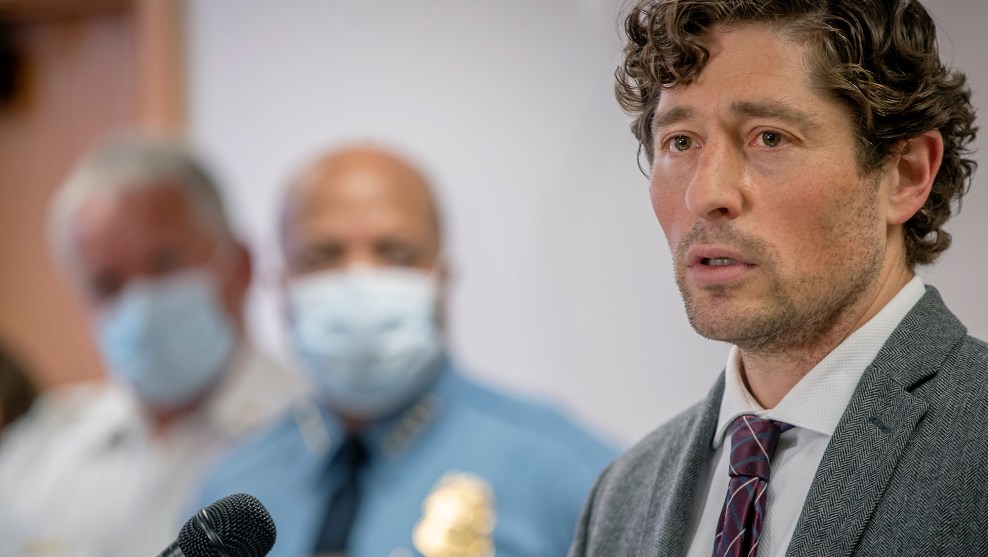 Why Won’t Democratic Mayors Crack Down on the Cops?

Nationally, the American Rescue Plan will deliver $350 billion to state, local, and tribal governments. Like Minneapolis, many municipalities are spending the money to support homeless people, small businesses, and health programs. But Biden has also urged mayors to tackle public safety amid a nationwide surge of gun violence that criminologists believe is linked to the economic devastation and isolation wrought by the pandemic. In a statement, the White House suggested the coronavirus relief funds could help “put more police officers on the beat,” in addition to supporting evidence-based violence prevention programs that aim to stop shootings by connecting people to jobs, housing, and mentors. “This is not a time to turn our backs on law enforcement or our communities,” Biden said in a press conference in June.

Black-led organizers around the country who successfully got cops out of schools and reduced some police department budgets are now trying to keep coronavirus relief money from flowing into law enforcement. “Anywhere there’s defund organizing, people are fighting hard to make sure these funds go to what their intended purpose was,” said Andrea Ritchie, a police misconduct attorney and an organizer in New York, “which was to ensure folks in the US are able to avoid an eviction crisis, and to ensure people have access to the health care and support they need.” These conversations are taking place in cities across the country, from New York to Milwaukee to St. Louis, Phoenix, and Oakland.

But it’s been an uphill battle. Since March 2020, the federal government has allocated $850 million for local law enforcement agencies through the CARES Act, according to a report by the COVID19 Policing Project. Pennsylvania spent $968 million of coronavirus relief funding on state prisons and $226 million on state police operations, according to the report. Lafayette, Louisiana, spent $11 million out of $13.6 million of its CARES Act money on police and firefighter pay raises and deescalation training.

And last year, the Chicago suburb of Cicero spent every penny of its discretionary CARES Act funding on police officer salaries, according to public records obtained by the Cicero Independiente. Chicago spent much of its discretionary CARES Act money on law enforcement, too, as did county officials. “This is consistent with how many jurisdictions throughout the country used the CARES Act funding, in line with guidance from the U.S. Treasury Department,” a spokesperson for Cook County’s finance bureau told the Independiente.

Police departments, police associations, and pro-police politicians have also pushed to get more American Rescue Plan Act money for law enforcement, according to the report by the COVID19 Policing Project. For example, the National Association of Police Organizations, a coalition of police unions and associations, lobbied to ensure the coronavirus relief legislation provided state and local aid such as premium pay bonuses for cops and other essential workers.

But giving so much relief money to the police undermines people who need access to those resources for their day-to-day lives, said Amara Enyia, a Chicago-based policy coordinator for the Movement for Black Lives, a coalition of grassroots groups around the country. “When we talk about recovery,” she said, “it’s recovery for the people, not for police departments.”

Ritchie, who co-wrote the COVID19 Policing Project report, agreed. “The fact that cops are just lined up at the trough with their bags wide open when they are a source of harm to communities is infuriating,” she said. “Cops don’t deserve hero bonuses for refusing to wear masks, for spraying large numbers of people with tear gas during a respiratory pandemic. Nurses who were saving our lives should be getting hero bonuses. People who did mutual aid projects to keep their neighbors alive should be getting hero bonuses.”

That’s not to say these organizers believe gun violence isn’t a serious problem. But they argue that keeping people in their homes, giving them jobs, and connecting them with health care is a better way to stop shootings than handing out more money for law enforcement. In Minneapolis, Reclaim the Block and other grassroots groups want to dismantle the police department and create a Department of Public Safety, which would likely still include some armed law enforcement, along with unarmed social workers, violence interrupters, traffic safety responders, and homeless outreach coordinators. Residents will vote on the proposal in November.

Mayor Frey, who does not want to reduce the size of the city’s police force, recommended that Minneapolis spend about $11 million of its first wave of American Rescue Plan funding on public safety. Under the plan that passed in July, around 41 percent of that public-safety spending would go toward expanding the police department or other law enforcement capabilities, including by paying for officers’ overtime, facilitating contracts with the sheriff’s department, and covering the costs of more surveillance cameras, among other proposals. Much of the rest would go toward community programs that address homelessness, mental health crises, addiction, domestic abuse, and other trauma.

Almost every city council member voted in favor of Frey’s allocation, except for Jeremiah Ellison, whose father, Minnesota Attorney General Keith Ellison, leads the office that prosecuted the former cop who killed Floyd. It’s perhaps surprising that Frey didn’t face more pushback: Last year, several council members declared after Floyd’s death that they wanted to get rid of the police department. But they approved the American Rescue Plan funding allocation on July 2, around the same time a county judge ordered Minneapolis to hire more police officers. About 200 officers quit, retired, or took time off after the protests that followed Floyd’s death last year. In November, the council allocated hundreds of thousands of dollars to fill these staffing gaps, before diverting $8 million overall from the police department budget, which stands at around $170 million. In February, council members approved even more money to hire police.

Some in Minneapolis cheered the council’s decision to bolster the police budget through coronavirus relief funds. “Law enforcement must be at the center of any successful multi-faceted strategy,” Steve Cramer, who heads up a collection of Minneapolis business leaders called the Downtown Council, wrote to city officials in support of their plan.

But others worry the American Rescue Plan funds were divided up without enough transparency. “There was little input solicited from the community,” said Robin Wonsley Worlobah, an organizer who is running for a seat on the council in November. Several residents who wrote to city officials during a public comment period urged them to divert funds from the cops. “Rewrite the plan. Don’t invest more millions in a system that continually puts down Black and other minority communities,” resident Ezra Jackson-Smith wrote in late June. “Invest in community, not cops!” added resident Kristen Ohm in another statement.

Frey said he didn’t solicit more feedback on the first wave of American Rescue Plan money because of time constraints. “There needed to be an urgency in getting this funding out to people who were struggling throughout our city. We needed to help people who were experiencing homelessness,” he said. “When time is of the essence, you can’t necessarily go through a six-month-long process. The urgency was intentional.”

Frey is expected to make recommendations later this year on spending another wave of American Rescue Plan money, about $180 million.