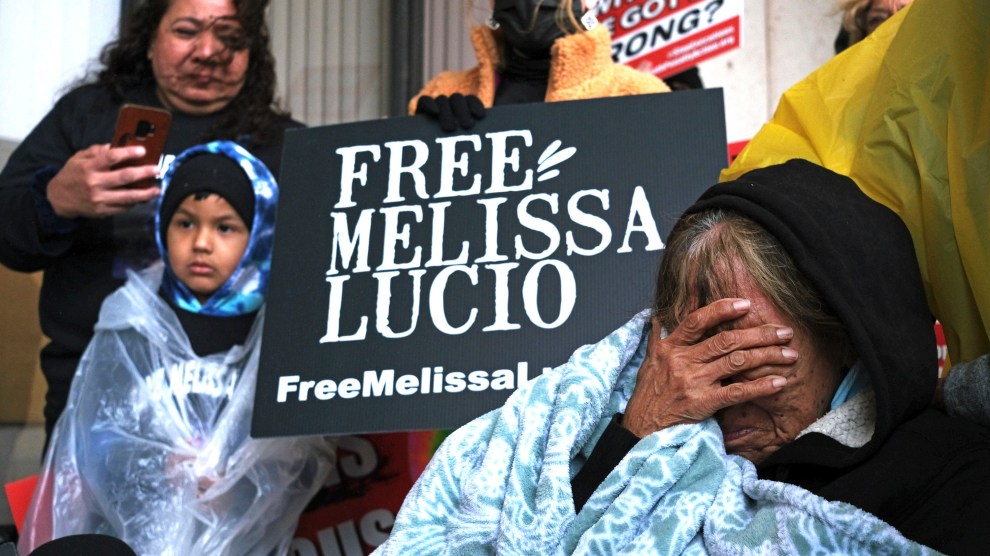 Update, April 25, 3:00 p.m. ET: Melissa Lucio has received a reprieve: The Texas Court of Criminal Appeals on Monday halted her execution because of significant doubts about her guilt. Her case will go back to a lower court, which will try to determine whether she is innocent and whether prosecutors kept crucial evidence from the jury and her defense attorneys.

In 2007, Melissa Lucio, a Mexican American mother in Texas, sat in a room with five police officers who believed she’d killed her two-year-old daughter, Mariah, at her apartment. The Cameron County officers tried to force a confession: In an interrogation that lasted five hours, they put their faces within inches of hers, screaming that they had evidence she’d beaten the girl. They demanded that she look at photographs of Mariah’s lifeless body.

Lucio, still in shock, told the cops more than 100 times that she was not guilty. Her daughter hurt herself in an accidental fall, she said. But after hours of relentless interrogation, exhausted and unable to cope, Lucio gave in, repeating phrases that the officers had hammered into her head: “I don’t know what you want me to say,” she told them in the early hours of morning. “I’m responsible for it…I guess I did it.” The coerced confession became the primary evidence used to convict her, and she was soon sent to death row, where she has since continued to claim her innocence.

There were “profound problems with the so-called confession that investigators ultimately extracted.”

On Wednesday, Texas plans to execute Lucio by lethal injection. More than a hundred Texas lawmakers, both Democrats and Republicans, have joined religious groups, women’s and domestic violence advocacy groups, and celebrities like Kim Kardashian in begging Gov. Greg Abbott and the state’s board of pardons to intervene and save her life. “The State of Texas presented no physical evidence establishing that Melissa ever abused Mariah or any of her children,” investigators at the Innocence Project, a nonprofit that has sought to overturn Lucio’s conviction, wrote recently. Even several of Lucio’s jurors are calling for mercy, saying they would not have sent her to death row had they been given more information about her case. In recent years, growing evidence has suggested not only that Lucio is innocent, but that the crime for which she was blamed never happened at all.

Back in 2007, as the five-hour interrogation stretched into the night, some of Lucio’s 14 children sat in another room, corroborating her version of events. They told detectives that their mother had never been abusive or violent in any way. Two days earlier, they said, Mariah accidentally fell down some stairs outside their house while Lucio was helping them get ready for school. The girl cried, and within the next couple of days she slept longer hours, according to family witnesses. When Mariah stopped breathing and would not wake up from a nap, Lucio called 911. The girl died before arriving at the hospital.

Forensic evidence suggests Mariah died from internal brain injuries caused by the accidental fall, according to a petition submitted in court this month by Lucio’s attorneys, who are calling for a postponement of the execution and a new trial. Mariah also had a medical history of difficulty walking that caused her to stumble in the past. But none of that evidence was presented to the jury.

So why did Lucio give in to the cops? Dr. Gisli Gudjonsson, an expert on false confessions and an emeritus professor of forensic psychology at King’s College London, studied the case and wrote recently that there were “profound problems with the so-called confession that investigators ultimately extracted” from her. The police officers used the Reid method, a controversial interrogation technique that manipulates a suspect’s emotions by abruptly switching tones—yelling at them to raise their anxiety, and then gently reassuring them that their discomfort can end if they simply take responsibility for the crime. It has led to numerous other false confessions in the United States. And it can be especially dangerous when the suspect is a survivor of trauma, as Lucio was, because survivors of trauma are more likely to falsely confess.

Just 18 or so women have faced the death penalty in the last 50 years.

Lucio grew up in a poor family in Lubbock, Texas, and was repeatedly sexually assaulted during her childhood. By the age of 16, she tried to escape the abuse by becoming a child bride. She then endured years of domestic violence. These traumas were not shared with the jury either. But, as the Marshall Project points out, they made her especially vulnerable to accepting blame for her daughter’s death, even if she was not responsible. A social worker believed Lucio often acquiesced to men in authority, like the police, because she had such a long history of being abused.

If Texas proceeds with killing Lucio, she would be one of just 18 or so women to face the death penalty in the United States over the last half-century, compared with more than 1,500 men. A court of criminal appeals in Austin is now considering her plea for mercy.