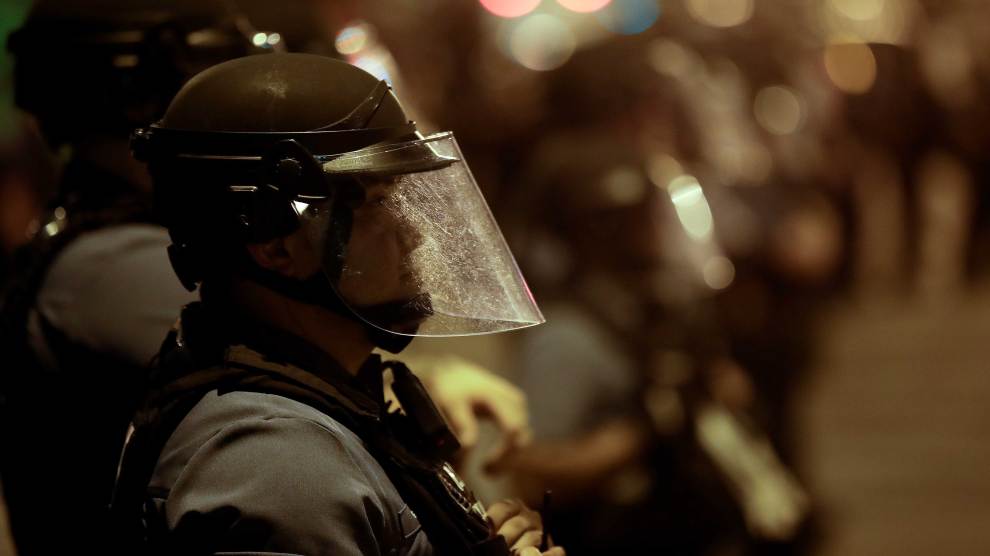 Update, June 1: Body camera footage appears to show that Leonna Hale was armed when she was shot by the Kansas City police last Friday. After reviewing the footage, the Jackson County prosecutor today charged Hale with unlawful firearm possession, exhibiting a firearm, and resisting arrest. In a statement, prosecutor Jean Peters Baker said Hale “continually displayed a weapon during her encounter with police officers,” according to the Kansas City Star. Hale has denied that she was armed, and an eyewitness did not see a weapon in her hand. It remains a question whether she is pregnant. In a statement, the Kansas City police said that “information we had on Friday from the hospital is that there is no indication the woman is pregnant.”

On Friday, police officers in Kansas City, Missouri, repeatedly shot a woman in a store parking lot even after a witness heard her tell them she couldn’t get on the ground because she was pregnant*. In an interview with the Kansas City Star, the witness said the woman, 26-year-old Leonna Hale, had her hands up in the moments before the officers fired their weapons.

Hale had been sitting in a car outside a Family Dollar store when officers ordered her to get out, according to the witness, a mother named Shé Danja who had gone to the store with her children to get gas and ice cream. The officers suspected that Hale and a man inside the vehicle might have been involved in a carjacking in a neighboring city, according to the Missouri State Highway Patrol.

The man exited the vehicle, jumped a fence, and ran as officers chased him, according to Shé Danja. She watched Hale, who is Black, step out of the car with her hands raised in the air. When officers ordered Hale to get on the ground, Hale told them she couldn’t because she was pregnant, according to Shé Danja. Hale added that there was a gun in the car, and began inching backward as officers approached her with their weapons drawn. She then ran three steps away from the officers, who responded by shooting her five times, according to Shé Danja. (Sgt. Andrew Bell of the Highway Patrol told me that a medical examination would need to be conducted to determine how many times Hale was shot.) Hale seemed “scared at them all coming towards her with guns in her face,” Shé Danja later wrote on Facebook.

It’s unclear whether Hale was armed. The Highway Patrol’s Bell told local reporters on Friday that a “suspect” handgun was discovered in the parking lot after the shooting, but he did not specify then whether Hale herself had a weapon. Bell told me on Tuesday that Hale did have a gun in her hand when she was shot. “We know for a fact that she was armed,” he said.

It’s worth adding that there have been many incidents around the country of the police lying or providing misleading information to the public after they shoot or injure people, though it’s not clear they did so in Hale’s case. (Not too long ago, a prosecutor accused Kansas City cops of falsely claiming that Cameron Lamb, a 26-year-old Black man, was armed when they fatally shot him in 2019.) The witness, Shé Danja, said Hale was not holding a gun. “She did not pull out a weapon on them,” Shé Danja told the Star. “She did not even have a stick in her hand.”

Video footage filmed by Shé Danja appears to show Hale lying on the ground after the shooting with blood on her shirt as an officer handcuffed her. When Shé Danja repeatedly asked the officers why they fired their weapons, they did not answer. More than a few minutes went by before Hale was offered any assistance, Shé Danja said. The Highway Patrol’s Bell could not confirm or deny that allegation, but said the agency would know more after evaluating body camera footage. “We will have a lot more detail in the coming days, weeks,” he said, adding that footage of police shootings aren’t normally released to the public during an investigation, but that the prosecutor’s office could release it later.

Hale went to the hospital with serious injuries but was in stable condition as of Friday night, according to Bell. According to the Kansas City Defender, she has a broken arm, a collapsed lung, and bullets lodged in her body. Bell cast doubt on whether Hale was pregnant but said the agency had not been able to verify one way or the other because of privacy laws that prevent the hospital from releasing information about her health. “There is a rumor she’s pregnant. We understand that,” Bell told me. “We believe she’s not pregnant.”

State troopers are now investigating what happened to Hale, and two of the officers involved in the incident have been placed on administrative leave. It is unclear whether Hale and the man who was with her are still suspected of involvement in a crime. As of Tuesday, Bell said he did not believe anybody was in police custody for the alleged carjacking.

The witness, Shé Danja, wrote on Facebook that the incident had traumatized her and her young children, who also watched it. “I’m literally in shock,” she wrote in a post sharing her video footage. (She later deleted the post because it was disturbing her.) “Keep in mind,” she added, that “they chased her BF who jumped out of the vehicle and he was captured unharmed…while she was left there in the street literally still near the vehicle she got out of.” Shé Danja was dismayed at how the officers handcuffed Hale after shooting her: “I’m a whole medical assistant and it’s literally not how you handle a gunshot victim who’s pregnant.”

The case has sparked outrage among activists around the country who say there was no good reason for the police to fire their weapons at Hale. “She had her hands up and told police she could not follow their directions to get on her stomach b/c she was pregnant. There is no reforming this,” tweeted activist Leslie Mac of the Frontline, a campaign of the Working Families Party, the Movement for Black Lives, and other racial justice advocacy groups. “If mass murderers of Black people can be apprehended alive,” tweeted Kimberlé Crenshaw, executive director of the African American Policy Forum think tank, “why must Black people in traffic stops constantly fear for their lives?”

*Update: This sentence was updated to more precisely reflect which information came from the witness.