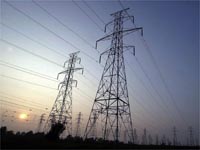 For the third time in fifty years, Washington Republicans are poised to sabotage our national energy economy, steering it away from a solar promise and back into the abyss of fossil fuels and nuke power.

In 1952, an energy strategy commission appointed by Harry Truman advised the president to move beyond fossil fuels and nuke power, investing instead in solar, wind, and other renewable sources. But then Dwight Eisenhower’s Republican administration arrived, and gave us “Atoms for Peace.”

Today, more than ever before, there is an energy plan ready and waiting to transform the US—and the world—with clean, cheap and reliable green power. But, instead of embracing the approach pioneered by Truman and fleshed out by Carter, the Bush administration and its cronies in Congress are playing the spoilers role once again.

The Republican Energy Plan finally revealed over the weekend is a fossil/nuke wish list. And, make no mistake, this bill is a pure partisan play. It was first drafted in secret by Dick Cheney’s industry-cozy energy task force, then refined in secret by two of fossil/nuke’s best friends on Capitol Hill, Sen. Pete Domenici and Rep. Billy Tauzin. Reminiscent of their shotgun passage of the Patriot Act, the Republicans now want the Energy Bill rammed through Congress with virtually no debate.

The bill offers billions in subsidies to the country’s coal, oil, nuke, and gas conglomerates – the King CONG consortium that has spent so much to keep the Republicans in office. It guts the environmental safeguards woven into the fabric of American life since the salad days of Richard Nixon. It includes special dispensations for manufacturers of the gasoline additive MTBE, which is polluting groundwater in California and elsewhere (not surprisingly, many of the biggest producers of MTBE are based in Tauzin’s home state of Louisiana) The bill removes restrictions — in place since the New Deal — on the electric utilities that gouge electric consumers and bring on blackouts. And it aims to drive a stake through the heart of the booming renewable energy industry that could, among other things, decentralize electric power production and make our rickety utility grid an unmourned nightmare of the past.

The historic moment could not be more profound. Twice in the past half-century, the United States stood at the brink of a major transition to solar power. Twice, the nation has been turned away from such a transition by the GOP and its King CONG funders. The consequences have been catastrophic.

Toward the end of his stay in the White House, Harry Truman realized that energy would be a defining issue for decades to come. He commissioned a Blue Ribbon panel to come up with a plan. Headed by William Paley, Chairman of the Columbia Broadcasting System, the 1952 “Material Resources Policy Commission” reported out with a revolutionary conclusion: the future of America’s energy was in the sun.

The massive, highly regarded tome argued that fossil fuels were a tenuous, polluting choice on which to build an industrial economy. The alternative was to capture clean, renewable solar power. By 1975, said the Commission, there would be 15 million American homes heated by the sun. And that would be just the start.

Amazingly, the Commission’s solar optimism came before the invention of photovoltaic cells (PV), which convert sunlight directly to electricity. Though the theories behind such cells had been discussed for decades, it wasn’t until 1954 that the Bell Labs produced the first usable prototypes. They were a stunning success. By 1957 they were powering satellites in space. A half-century later, those original PV panels still produce electricity, with no clear theoretical limit to how long they might last.

Unfortunately, their potential for placing the world’s electric supply on a clean, inexhaustible basis was chopped short in December, 1953. After Dwight Eisenhower took the White House, he aligned with the Atomic Energy Commission, whose main business was building the bombs that threatened the world with extinction. But the AEC wanted to branch out into civilian enterprise and buy itself a more pacific image. So Ike told the United Nations that the future of the world’s electric supply would rest with the “Peaceful Atom.” The Paley Report was lost in the shuffle.

A trillion dollars later, the US gets less than a fifth of its electricity—less than a tenth of its total energy—from atomic power. Radioactive waste continues to pile up at 103 reactors which, in a deregulated environment, become more dangerous every day. On September 11, 2001, the first jet that flew into the World Trade Center flew directly over the two reactors at Indian Point, north of New York City. Six months later a massive hole was found in the six-inch-thick pressure vessel meant to keep Ohio’s Davis-Besse reactor from becoming a new Chernobyl. Shortly thereafter, a rickety grid badly managed by FirstEnergy, Davis-Besse’s deregulated owner, suffered a series of short-circuits that blacked out fifty million people.

Ike’s choice was to make a national U-turn away from the solar future. Had the trillion dollars that went down the nuclear drain been available for PV research and passive solar design, along with other green energy technologies such as wind power and biomass, the world would be a very different place. America’s dependence on King CONG would have been diminished, countless wars could have been avoided (including, almost certainly, the latest one in Iraq), our air and water would be cleaner, our homes, offices and communities more self-sufficient, our economy more stable, and our lives more peaceful, prosperous and secure.

In the late 1970s, solar power got a second chance. As the Vietnam War wound down and the oil embargo raged, a unique coalition of anti-war activists and rural conservatives arose to fight what Ike wrought. A 1975 “Toward Tomorrow” fair at the University of Massachusetts in Amherst showcased a solar future with visionaries like Buckminster Fuller, efficiency guru Amory Lovins and wind pioneer William Heronemus. Talk of a “Manhattan Project” for renewable energy filled the air. In 1976 “No Nukes” activists began swarming over reactor sites such as Seabrook, New Hampshire, Diablo Canyon, California and Three Mile Island, in Pennsylvania. Calling for an end to the Peaceful Atom, they demanded a revival of the Paley Report. Lovins, ecologist Barry Commoner and others laid out a second, far more detailed series of blueprints for a solar-powered future.

Jimmy Carter headed in that direction. Famous for the sweater he donned to underscore the need for conservation, Carter also picked up the push for solar power. Using federal funds, he established the Solar Energy Research Institute outside Denver (it later became the National Renewable Energy Lab). He funded research into wind power, which got a huge boost from California Governor Jerry Brown, whose tax credit program brought some 17,000 windmills to the Golden State, many of which are still operating.

Unfortunately, Carter also squandered tens of billions on a futile push for synthetic fuels, money gained through a windfall profits tax the government had realized with the deregulation of oil prices. And Carter continued to support nuclear power, although new reactor orders dried up, then stopped altogether after the Three Mile Island crisis in 1979. By 1980, the US boasted a nascent renewable industry that involved tens of thousands of jobs and claimed more than 90% of the world’s wind-generated electricity. With nukes on the ropes, with the OPEC embargo underscoring the folly of dependence on fossil fuels, and with a green fortress of environmental protection apparently firmly in place, solar power seemed ready to explode.

Meanwhile, in Denmark, Germany and Japan, wind technology pioneered in the U.S. surged ahead. Having rejected the nuclear option, and with centuries of history in the wind business, Denmark was soon home to four of the world’s biggest wind turbine manufacturers. By the 1990s, ten thousand Danes were at work building big commercial windmills, now the country’s second-largest export.

By the dawn of the new millennium, European and Japanese-made wind machines had become the cheapest form of new electrical generation. The industry boomed worldwide with 25-35% growth rates, spilling back into the United States. In Texas alone in 2001, more than $900 million worth of large wind turbines went on line. This year, new satellite-based wind maps, compiled by Stanford University, show that, with existing technology, turbines placed between the Mississippi and the Rockies alone could generate three times the electricity the US consumes. Turbines located offshore and in the Great Lakes promise still more.

The solar business has also exploded, with similar growth rates and stunning new breakthroughs. The cost of installing PV panels, or newly developed electrified shingles, has plummeted. In 1991, San Francisco passed a $100 million bond aimed at turning its municipal buildings into self-sufficient solar power plants. And there have been similar breakthroughs in transmission efficiency, and in geothermal, wave, tidal and ocean thermal energy generation. At least in technological terms, the 50-year-old Paley dream is more tangible and attainable than ever.

But precious little of that promise can be found in the Cheney-Domenici-Tauzin Energy Bill. Its pitiful solar scraps are as infuriating as they are thin. True, the bill does include the Production Tax Credit for wind power. The GOP never ceases to emphasize the tax credit, which is vital to the wind power industry, and some Great Plains Republicans are sincere supporters of a technology that could save thousands of family farms. But the Republicans in Congress still don’t deserve the wind industry’s thanks. The credit could have passed months ago, had it not been cynically stripped from the GOP budget and stuck in the energy bill — a lame attempt to give Cheney’s handiwork a green tint. At this point, the tax credit is being used to blackmail the wind industry into backing a bad deal.

Even with the tax credit, this is a HumVee energy bill, a serious step away from our long-overdue green, renewable energy economy. There isn’t a single atomic reactor on order or under construction in the U.S. But the Bush-Cheney-Domenici-Tauzin bill would subsidize — and protect from liability in case of disaster — a fresh start for a technology with fifty years of proven failure under its pock-marked dome. It provides massive subsidies for big coal, even though coal production is in decline; for big oil, the source of ceaseless global strife; and for natural gas, the supply of which is expected to fall off a cliff any day. From catastrophic meltdowns to global warming, from filthy air to devastated water, all of the above are proven ecological and public health disasters. They’re bad for the economy, and they’re bad energy policy.

A better, solar-based quality of life beckons, as it has for fifty years, now more powerfully and convincingly than ever. But every one of the billions of dollars earmarked to prop up King CONG pushes that sustainable society further into the nether world.