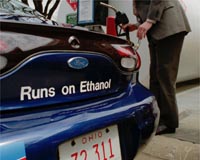 For the first time in history, California and Washington may be on the same page when it comes to transportation. That is wonderful or worrisome depending on one’s point of view.

I lean toward worrisome.

Both President Bush and Governor Schwarzenegger have embraced the vision of a fuel-cell-powered, hydrogen-fueled transportation system of the future — Bush in his State of the Union address in 2003, and Schwarzenegger in his recent State of the State address. The wonderful side of this is that they are proposing a solution commensurate with the scale of the problem. A hydrogen future could entirely do away with our dependence on petroleum as a transit fuel. The worrisome side is that achieving such a future will require changing every facet of our transportation energy system. We will need new refineries, new pipelines and new storage systems. We will have to replace internal combustion engines with fuel cells and gas stations with hydrogen stations. The capital cost to California alone will be more than $50 billion, and even the rosiest predictions don’t expect the benefits to be seen for decades.

A better alternative exists, one that can achieve the same environmental and national security benefits decades sooner, and at a fraction of the cost. The strategy relies on hybrid vehicles and biofuels like ethanol rather than fuel cells and hydrogen. Even the National Research Council, the arm of the National Academies charged with advising Washington on scientific matters, advocates investing more immediate effort and energy in developing a system based on hybrids and biofuels. Unfortunately, that alternative is being obscured by the scene-stealing hydrogen vision being peddled in Washington and Sacramento.

At the heart of the hydrogen future is the fuel-cell-powered car. The key selling points of fuel cells are that they are two to three times more efficient than conventional internal combustion engines, and produce zero emissions. But comparing a future technology to one that is 100 years old is inappropriate. Better to weigh it against the newest technology, the hybrid electric vehicle. A hybrid vehicle uses a combination of electric motors and a conventional internal combustion engine to power the car. The newest hybrids already achieve fuel efficiencies comparable to those promised by fuel cells. Most importantly, they are in the showrooms now. Indeed, they have become among the most popular models for several manufacturers. There is a two-month waiting list for the new Toyota Prius. This fall, Toyota will introduce its hybrid SUV, which will demonstrate that one can achieve high mileage (40 miles per gallon, about twice the fuel efficiency of a comparable SUV) without compromising on performance or size. Ford plans on doing the same with a hybrid version of its own smaller SUV. The only fuel cell cars on the road today are test vehicles.

Policy makers in Washington and Sacramento express support for hybrid vehicles, but that support hasn’t translated into aggressive actions to expand their use. A year ago, when it redesigned its benchmarks for car manufacturers to meet a zero emission vehicle goal, California reserved its highest regulatory incentive, the gold standard, for fuel cell cars, not hybrids. That priority needs to be reversed.

The second prong in this transportation strategy is to expand the electric-only driving range of hybrid vehicles. At present, hybrids do not travel far on electricity alone. The improved vehicle efficiency comes from eliminating fuel consumption while idling and by using electric motors for acceleration. A modest modification in the hybrid design would allow the cars to charge their batteries from the grid system as well as from the engine. These vehicles are appropriately named Plug-in Hybrid Electric Vehicles (PHEVs), and Daimler/Chrysler has announced it will introduce test vehicles in Europe and the United States next year.

A PHEV has more battery storage and a smaller gas engine than a conventional hybrid, allowing electricity to become the vehicle’s primary source of power. PHEVs can reduce the amount of gas needed by the engine by 85 percent. Such a dramatic reduction would enable us to adopt the third prong of this strategy, one that could completely displace our drive-time dependence on petroleum: a dramatic increase in the use of biofuels.

Biofuels can be made from either vegetable oils or sugars. Vegetable oils can be used instead of diesel, while ethanol, made from fermented corn sugars, can take the place of gasoline. Given that less than 2 percent of U.S. passenger vehicles run on diesel, it makes sense to focus on ethanol. What’s more, there is already a national infrastructure for producing and delivering ethanol, with a 3 billion gallon production capacity.

Ethanol is the fuel that environmentalists and Californians love to hate. Many Californians and others view ethanol as a multi-billion dollar boondoggle for Midwest farmers and the agribusiness giant Archer Daniels Midland. But ethanol is undeniably a green fuel; clean-burning and renewable.

In 1990, the Clean Air Act required states to add oxygen to their gasoline in order to reduce emissions. They could do this either with MTBE, an oxygenate made from natural gas and petroleum, or with ethanol. California chose to use MTBE. By the late 1990s, about 13 percent of the transportation fuel used in California contained MTBE. Then the state, and the nation, discovered that MTBE contaminates ground water. Now, California and 14 other states are phasing out the use of MTBE.

This February California Senator Diane Feinstein and Governor Schwarzenegger renewed their appeal to the White House. But the context for a debate about ethanol in California has dramatically changed. Three years ago, California’s vehicles were using virtually no ethanol. This year, they will consume some 800 million gallons. Ethanol has gone from zero percent to about 6 percent of the state’s transportation fuel without a hitch. Even the most ardent hydrogen advocate doesn’t envision that fuel’s achieving a similar market penetration rate for decades. In fact, the NRC panel asked to investigate the promises of a hydrogen determined that the transition “would take many decades, and any reductions in oil imports and carbon dioxide emissions are likely to be minor during the next 25 years.”

Admittedly, ethanol and other biofuels cannot displace gasoline if gasoline is used as profligately as it is today. There simply is not enough biomass to convert. But with hybrids and plug-in hybrids dramatically reducing the need for fuel, ethanol and other biofuels could become alternatives to gasoline, not simply additives as they are today. And when compared to a hydrogen highway, an ethanol highway wins hands down.

Without any subsidies, the price of ethanol on a gallon of gasoline equivalent basis is less than half that of hydrogen. The cost of installing an ethanol fueling station – that is, one that can dispense fuel that is 95 percent ethanol — is one-tenth the cost of installing a hydrogen fueling station. Finally, hybrid cars – both those already on the road and the PHEV’s on the horizon — can burn 95 percent ethanol fuels without significant changes in design. The additional cost to a manufacturer to allow a car to run on ethanol or gasoline or any combination thereof is about $150 per vehicle. The most optimistic forecast for the cost of a fuel cell car available in 2015 assumes an additional cost of $10,000. Most estimates are several times higher. Over 4 million cars capable of using ethanol or gasoline cars are now on the road, several hundred thousand in California.

Ethanol has also been criticized as containing only a little more energy than is used in making it. But again, when compared to the most common sources of hydrogen, ethanol wins. The net energy ratio for ethanol production is climbing as farmers and manufacturers become more efficient. And when hydrogen is drawn from natural gas — the dominant source of hydrogen today and for the foreseeable future — the net energy ratio is worse than ethanol’s.

Ethanol today comes from a renewable resource, corn starch. And it will soon be fermented from the sugars of other abundant biomass materials like grasses, straw, organic wastes, kelp and wood. Hydrogen, by comparison, comes from nonrenewable resources like natural gas, coal and petroleum. True, hydrogen can be made from renewable resources. We could generate electricity from wind and use the electricity to extract hydrogen from water and then transport the hydrogen to the point where it could be burned in cars’ fuel cells. But this a convoluted and inefficient way to use wind power. It is far more economical at this point to use the wind-generated electricity directly, or store it in PHEV batteries.

One final though: Like natural gas, petroleum, and coal, ethanol contains hydrogen. It is cheaper to transport hydrogen-containing materials like ethanol than to transport hydrogen itself, because hydrogen must be compressed several thousand times for transport or storage, and that costs money and wastes energy. Significant advances have been made in cheaply extracting the hydrogen from ethanol. So, in the long term, an ethanol-fueled transportation system could lay the groundwork for a more incremental transition to hydrogen.

An ethanol highway or a hydrogen highway? Let the debate begin.