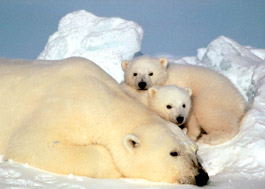 It is late April, nine days since the return of the midnight sun, and a 450-pound polar bear and her cubs walk on the finger of a frozen fjord. Spring has arrived on the Norwegian archipelago of Svalbard, a favorite nursery for polar bears. About 670 miles from the North Pole, the mother bear lumbers along in her hunt for ringed seals, leaving a zigzagged path of 12-inch-wide craters followed by the smaller paw prints of her two young sons.

A few miles away, from the front seat of a helicopter, scientist Andy Derocher has spotted the family’s fresh trail. The chopper’s pilot loops, spins, and straddles the tracks, following their erratic path for several miles. “She’s running here,’’ Derocher tells the pilot, pointing to the edge of a craggy glacier. “I think she’s ahead of us here somewhere.”

One of the world’s leading polar bear experts, Derocher is monitoring the health of a species imperiled by a double whammy of toxic chemicals and global climate change. He and other wildlife biologists now predict that some populations of the world’s 22,000 to 25,000 polar bears could become extinct by the end of this century.

Born at Christmastime, cradled in pure white snow, polar bears emerge blind, toothless, a pound apiece, as feeble as kittens. Yet before they even leave the safety of their dens on Svalbard, polar bear cubs already harbor more pollutants in their bodies than most other creatures on the planet. Mother polar bears store a lifetime of chemicals in their fat and then bequeath them, via their milk, to their young.

Several hundred of the industrialized world’s most toxic chemicals, especially PCBs and organochlorine pesticides such as DDT, have transformed Svalbard and much of the Arctic into a giant chemical repository, and polar bears into its unintentional lab rats. Newcomers are joining the older chemicals there, including flame retardants called PBDEs and a compound used in the manufacture of Teflon. Originating mostly in North America and northern Europe, the pollutants hitchhike to Svalbard, Greenland, and other remote reaches of the Arctic on northbound winds and ocean currents. There, they magnify in animals each step up the food web, leaving polar bears, killer whales, and other top predators highly contaminated.

Scientific studies suggest that these extraordinary loads of chemicals are weakening polar bears, culling the old and the young. Their immune cells and antibodies have been suppressed, and their sex hormones, thyroid hormones, and even their bone composition have been altered. And perhaps most curious of all, small numbers of strange pseudohermaphroditic bears have been discovered. Of every 100 female bears captured on Svalbard, three or four have partial male genitalia.

“Could you realistically put 200 to 500 foreign compounds into an organism and expect them to have absolutely no effect?” asks Derocher. “I would be happier if I could find no evidence of pollution affecting polar bears, but so far, the data suggest otherwise.”

While toxic substances are jeopardizing bears, the melting of the Arctic is a more immediate threat to their survival. In Canada’s western Hudson Bay, the sea ice where they hunt seals breaks up three weeks earlier now than 30 years ago, polar bears have declined from 1,200 in 1985 to fewer than 950 in 2004. That same year, marine biologists in Alaska reported finding four drowned polar bears, perhaps because they were unable to swim long distances to reach solid ice. Forty wildlife scientists, representing all five nations inhabited by polar bears, adopted a resolution last June declaring that the bears are “susceptible to the effects of pollutants” and those effects are exacerbated by the stresses of global warming.

In 20 years of Arctic research, first with the Norwegian Polar Institute and now with the University of Alberta, Derocher has captured and tested more than 4,000 bears. It is dangerous work, but the only way that scientists can monitor their health. Scanning the ice below, he has picked up the bear family’s trail, and soon the mother and cubs are below the helicopter. In the backseat, Norwegian scientist Magnus Andersen injects a syringe of tranquilizer into a dart and screws it onto a shotgun. The helicopter spins in circles perilously close to the ground to give Andersen a clear shot. He leans out the open door, takes aim, and fires. Hit in the rump, the mother wobbles, but she isn’t going down. Andersen readies another syringe and fires again. The bear lies down on her stomach, one giant paw splayed back. The two cubs nuzzle her, trying to awaken her, then curl up beside her.

The cubs, only four months old, are wide-eyed and curious as the helicopter lands and the scientists cautiously approach on foot, their boots crunching in the crusty snow. Derocher sets down his black toolbox, removes some dental pliers, and opens the sleeping bear’s jaw, deftly extracting a tooth the size of a cribbage peg that will be used to confirm her age. Andersen slices a quarter-inch-diameter plug of blubber from her rump with a biopsy tool and siphons a tube of blood from a vein in her inner thigh. Then Derocher kneels beside the mother and milks her to sample the creamy liquid she is feeding her sons. The milk, fat, and blood will be analyzed for a suite of chemicals. Before departing, the scientists tranquilize the cubs. The threesome will snooze for a couple of hours, then shake off the drowsiness and continue on their way.

Aloft again, the helicopter glides north between Svalbard’s snow-draped peaks until Derocher spots more tracks—this time, a mother and two yearlings. Relishing the clarity of spring’s eternal light, the scientists know that polar winter will soon descend, plunging Svalbard into darkness again. Into that darkness the next generation of ice bears will be born—to a very uncertain future.