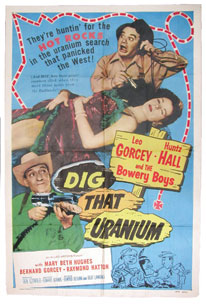 David Chiles stood bowlegged under his oil-stained hat as his three sons worked the drill mounted on their ’65 flatbed truck. The diesel engine caterwauled; when the drill hit 120 feet, it began spewing white dust. On Chiles’ leathery and liver-spotted face, you might have detected something resembling happiness. To a man who learned geology the hard way, white dust meant rock layers where ancient salt had leached out the red of iron oxide and magnesium. Where there was salt, there had once been water. And where water had wended through 140-million-year-old bedrock, there might also be the radioactive ore that once brought big money to places like Nucla, Colorado.

After a hiatus of more than 20 years, nuclear energy is resurgent. Worldwide, more than 130 new nuclear plants are under construction, and momentum is building toward new plants in the United States, where no reactors have come online since 1996. The result is a uranium boom in the Southwest: Since 2000, 175 U.S. firms have jumped into the market, and exploration expenditures have more than tripled to $185 million a year. In Colorado’s San Miguel County, south of Nucla, some 1,731 new claims were staked last year; in all of 2002, there were 3. At the vanguard of the rush are the dilapidated towns whose residents reaped the rewards—and paid the price—of the last boom.

Nucla sits in a constellation with neighboring Naturita and Uravan, high on the hardscrabble uplift of the Uncompahgre Plateau in southwestern Colorado. This is the Uravan Mineral Belt, where prospectors once dug for copper and amethyst and, beginning in 1898, a canary-yellow substance known as carnotite that was found to contain radium and uranium. At the close of World War II, the Manhattan Project was fashioning the world’s first nuclear weapons from Uravan yellowcake.

By the 1970s the Cold War uranium rush was in full swing, and David Chiles, then in his 40s, was drilling hundreds of exploratory holes each year. Prospectors filled the saloons, the Uranium Drive-In, and the Radium Theater; thousand-dollar poker games were commonplace. But then came the headlines about faraway places such as Three Mile Island in 1979 and Chernobyl in 1986. The two accidents brought new nuclear plant construction in the United States to a dead halt; for the existing plants, there was cheap uranium from Canada and Australia, and from the vast nuclear weapons stockpiles that were decommissioned as détente took hold.

By the mid-’80s, Nucla and Naturita had decayed into a kind of high-desert Appalachia, stripped of population from a high of nearly 1,000 each to about 1,400 people between them today. Nucla’s elementary school closed two years ago for lack of students and now sits fenced off, its swing sets overgrown with Russian thistle. Sixteen miles up the San Miguel River, Uravan—a company town once wholly owned by the Union Carbide Corporation—is gone altogether, so thoroughly contaminated by radiation that federal officials declared it a Superfund site in 1986 and ordered it razed. More than 80 of Uravan’s former residents, many suffering from cancer and other illnesses linked to radiation exposure, have sued Union Carbide; the case was dismissed earlier this year, though the plaintiffs are appealing the decision.

George Gore, 59, a retired uranium miner and mill worker, grew up in Uravan, where his father worked for 24 years in the Union Carbide mill; he now lives in Grand Junction, Colorado. Gore, whose big white beard makes him look like a weather-beaten Santa, spent 18 years in the mining industry, several of them digging for uranium in the Lazy L Mine outside Uravan. By age 30, he had developed severe lung problems. “In 1977, I was told by a doctor that I’d be dead in two years if I didn’t get out of uranium mining,” he says. (Government records show that radiation levels at the Lazy L in the 1970s were so high, a worker would hit the maximum exposure to radiation considered safe over a lifetime—or 30 years of work—in just 4 years.) I met Gore when he returned to Nucla with his sister, Gladys, last winter. The siblings visited the local cemetery, its rows of headstones adorned with pickaxes, mining jacks, shovels. They listed off the dead as they walked: their father, from cancer; three brothers, from cancer, one at the age of 24; their uncle, who drove uranium trucks, from emphysema (“Never smoked a day in his life,” said Gore); their aunt, from lung cancer; several cousins, from cancer; dozens of schoolmates, from cancer. “Almost all the people I grew up with—all of ’em dead,” said Gore. “It’s one of the tragedies of the Cold War. And now we want to try it again.”

Then again, 20 years of hard times are a strong incentive to get over things like that. “People here who have lost families tell me they are not as worried as they once were,” says Roger Culver, editor and publisher of the San Miguel Basin Forum, Nucla’s paper of record. “They’re thankful that the federal government has stepped in and acknowledged the impacts. They are optimistic that safety in mining and milling has improved.” Besides, towns such as Nucla and Naturita have never been exactly obsessed with safety rules: The Chiles men don’t always bother to wear respirators when their drill kicks up sun-blotting plumes of possibly radioactive dust, and David says no one in his family has suffered the classic mine-town health problems such as cancer, birth defects, and emphysema. Miners recall regularly eating lunch at 400 feet down, just next to mounds of radioactive ore.

Last winter, a local financier, George Glasier, announced plans to build what would be only the region’s second uranium mill, just outside Naturita. Milling, which is the process of separating pure uranium from the raw mineral ore, is a highly toxic endeavor that has been linked to many health problems in workers, including cancer and a range of lung ailments. The mill would provide about 100 jobs, according to Glasier—steady, local jobs in a place where many residents now drive 60 miles to Telluride, Colorado, to clean hotel rooms and wait tables. Environmental groups such as the Sierra Club have vowed to oppose the plan, which in any event will likely be tied up in the state’s licensing process for several years.

In the pines above Paradox Valley, the Chiles brothers were drilling their 18th straight dry hole—220 feet deep, each linear foot another $10 down the drain. Their father, covered in grime from the day’s work, stood by, his face expressionless. Experience told him there might be just a single pound of uranium below for every 10,000 pounds of shale. When the Geiger counter confirmed what David already knew, the brothers collapsed the drill, picked up the wooden blocks stabilizing their rig, and drove a hundred yards up the road to start anew. A pale, shimmering dust covered the ground and shrubs and trees for 10 yards in every direction, as if a spot storm of something alien had blown in.