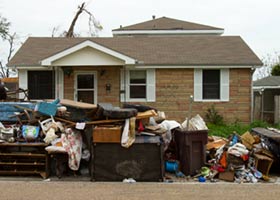 In the first part of “Storm Warning,” John McQuaid explored lessons we haven’t learned from Katrina—even as climate change increases the risk of catastrophic storms and flooding far beyond the Gulf Coast. The Bush administration has yet to devise a national strategy for protecting the nation from such disasters. But the Dutch did it—50 years ago, after a major storm breached a network of dikes similar to New Orleans’ levees, killing close to 2,000 people. Today, McQuaid assesses what we can learn from the Netherlands.
—The Editors

In the centuries-long battle to protect New Orleans from rising waters, the hurricane levees are an afterthought. Built over the past 40 years, they are short, weak, and ramshackle structures, especially when compared to the river levees that keep the Mississippi River in its narrow navigation-channel banks. Ports, shipping, and barge companies all have influential lobbies, and over the decades the U.S. Army Corps of Engineers became a one-stop shop for pork-barrel river projects, sometimes justified with cooked cost-benefit analyses. The Louisiana landscape is dotted with these and includes the now-infamous Mississippi River-Gulf Outlet, a shipping channel not far from the Old Gentilly Landfill in eastern New Orleans. Though it hasn’t received substantial traffic in decades, it did cause significant marsh erosion and turned out to be a conduit for storm surges into New Orleans. By contrast, hurricane levees have no economic benefit other than preventing disasters, and thus no constituency other than the public itself. The Corps’ now-notorious slapdash engineering in New Orleans (see “Broken: the Army Corps of Engineers“) wasn’t happenstance. It was the logical result of this dysfunctional system.

Two years after Katrina exposed the fragility of the hurricane levees and
the system that made them, the city remains exposed and vulnerable. Since
Katrina, the Corps has embarked on an ambitious program to repair and
fortify the levee system by 2011, one whose price tag keeps rising. Last
week, Corps officials announced they would be asking Congress for an
additional $7.6 billion, bringing the project total to $14.7 billion of
improvements: compacted clay and mud, concrete armoring, floodgates, and
pumping stations. It’s a clear upgrade from the shoddy pre-Katrina
system. It includes, for example, a proposed floodgate on the Intracoastal
Waterway, which should provide a measure of protection for the Old Gentilly
Landfill and the residents nearby.

But even if the Corps can pull this off—and it’s not clear that it can—this
huge investment is still, in some sense, a mere stopgap. Statistically, the
odds that any spot in this enhanced system will be overtopped in 30
years—the life of a mortgage—are about 1 in 4, and probably greater given
the eroding landscape and the increased risk of severe storms that may
accompany climate change.

So today Louisiana politicians are demanding “Category 5” protection, a system of flood defenses capable of repelling the worst that a hurricane could dish out. Congress has ordered the Corps to study the matter and report back next year with some options. But what, exactly, does Category 5 protection mean? Right now, nobody knows. There is no master plan for New Orleans.

But models for this kind of endeavor already exist, and the best of them is in the Netherlands. Over the past 50 years, the Dutch have built the world’s most sophisticated system of flood defenses. I went to see them two months after Katrina. After weeks of looking at decidedly low-tech structures of mud, steel, and concrete, it was like materializing into a Star Trek episode. I was soon strolling under a giant canopy of tubular white girders in the Maeslant storm surge barrier, a gateway across a shipping channel into Rotterdam. Completed in 1997, it’s the last piece of a massive project to fortify the coast, begun after a 1953 flood that busted hundreds of dikes and inundated the country’s south, killing 1,835 people. The barrier is both functional and beautiful: From the air, it resembles a delicate butterfly. When a storm surge approaches on the North Sea, an electronic warning system activates the barrier automatically, and the two gates—the butterfly wings—swing out into the water on ball bearings 30 feet in diameter to close the channel and block the storm surge.

But it’s not the machinery so much as the political and legal system behind it that offers lessons for America. After an intense debate following the 1953 disaster, the Dutch decided to junk the philosophy that had guided them for hundreds of years. Instead of building hundreds of miles of dikes around inhabited areas—the approach now employed in New Orleans—they decided to raise gated barriers across the three large estuaries where the sea enters Dutch territory. (North of the estuaries, the coastline is hardened with walls and gates, dunes high enough to block storm surges are scrupulously maintained, and a 20-mile seawall was built to close off a large inlet from the sea.)

Like positioning soldiers in a mountain pass, the estuary plan focused resources at the most critical places, preventing storm surges from getting near settled areas farther back. It’s a system engineered to a safety standard 100 times more stringent than the current goal (not yet achieved) for New Orleans’ most heavily populated areas. Even Dutch pasturelands have more protection than the Big Easy.

To do all this, the Dutch had to push their science in new directions. “For a hydraulic engineer, this was like putting a man on the moon,” Tjalle de Haan, a government engineer who worked on the projects, told me. But the true innovation was the acknowledgement that as environmental conditions change, humans must get out in front of them—and stay there. As land sinks, or the sea rises, the government must upgrade its flood defenses; in the Netherlands, that’s a legal mandate, not a question to be debated, one pork-barrel project at a time, with each new legislative session.

America is not the Netherlands, of course. The differences in landscape alone make it impossible to exactly replicate the Dutch model—there is no way to build a wall around the entire Mississippi delta, nor is that advisable. But the larger, and more critical, difference is that the United States has nothing resembling the Dutch mandate for protection. The Netherlands’ approach—designing projects based on estimated risk—long ago became routine for the private U.S. nuclear, aviation, and energy industries, and for the government agencies that build bridges and other infrastructure. But not for the federal agency charged with protecting millions of people from floods, the Corps of Engineers.

Congress allocates money for water projects on the basis of political power, not a scientific accounting of who’s most at risk. This year’s Water Resources Development Act, the final version of which passed the House earlier this month and is expected to be green-lighted by the Senate in September, is a cornucopia of earmarks, including beach-replenishment projects demanded by vacation communities in New Jersey and Florida, as well as money to study the navigation impacts of one of Alaska Republican Rep. Don Young’s two infamous “bridges to nowhere.” There’s money for short-term fixes to New Orleans’ levees, and a modest provision that would require outside review of the design of big Corps projects. But there’s little funding set aside for much-needed flood defense upgrades in other vulnerable communities. The White House, which should be devising a long-term strategy for protecting the population, has also done nothing on this front. Further confusing matters, President Bush has threatened to veto the bill if Congress doesn’t cut its $21 billion price tag.

Tomorrow, the conclusion of “Storm Warning,” which examines the lax response to Katrina, the enormity of the task at hand, and why it could take another catastrophic storm for the government to finally take action.