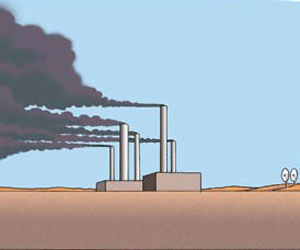 Since I spend most of my time haplessly battling global warming, I encounter a fair number of climate-change skeptics. They’re usually clutching some tattered study about tropospheric temperatures from six years back, or muttering about sunspots, but they’re almost never carefully weighing the actual current science. The wellspring of their skepticism lies not in chemistry or in physics but in ideology, and their syllogism goes something like this:

This proof has certain logical shortcomings, beginning with the fact that it’s illogical. But it is emotionally comforting. For those who wanted to stop thinking about politics and responsibility and morality and science and all that stuff, the advent of Reagan-era market fundamentalism was a godsend, and anything that threatens to disrupt it is an identity-challenging tilt of the psychic pinball machine.

So what I tend to say to these people is, I hear you. Markets are powerful. Let’s think about why they’ve failed here and how to make them work.

And there’s a one-word answer: information.

Markets are impotent in fighting the greatest challenge our planet has ever faced because we’ve given them absolutely nothing to work with. They exist in childlike innocence about the crisis because carbon carries no required cost. And in fact almost everything that environmental campaigners are doing at the national and the international level is an effort to fix that problem—to feed information into markets so they can help slow the rise of carbon. That’s right: If there are true believers (or at least true hopers) about markets right now, they tend to be green.

Let’s take the widely touted proposal for an 80 percent cut in carbon emissions by 2050 via a “shrinking cap” on emissions that would cause the price of carbon to rise steadily for the next 40 years. (Full disclosure: I helped run a nationwide campaign last year calling on Congress to endorse that target.) Here’s what the cap would mean in practice: If you were sitting down tomorrow to run the financials for your new power plant, there’s no way you’d go with coal—the cost would make your spreadsheet shriek. Instead, you’d look much, much closer at solar-thermal power plants or banks of windmills. If you were a property developer whose clients had any ability to calculate, your next office building or subdivision would be closer to the trolley line (which you’d be pressuring the city to build), and all the walls would be stuffed with insulation. If you owned a car company, the rising price of carbon should be enough to prevent you from designing one more bulked-up suv—and so on.

The point is, markets are powerful precisely because they allow information to filter down quickly and thoroughly, creating new realities—a new medium in the economic petri dish. Given that solving global warming will require huge systemic change over a very short period, that’s a useful mechanism.

Clearly global warming will carry enormous costs. Taller levees. Higher food prices. Treating malaria patients in New Delhi and maybe New York. One estimate put the tab higher than the combined cost of both World Wars and the Great Depression. What we need to do is make the markets foresee that cost and act accordingly.

Close the enron loophole In some regions, natural gas bills have almost doubled since 2000. Blame Ken Lay and his friends in Congress. Unlike other commodity markets, which are federally regulated, electronic trading on energy markets is immune from government oversight, thanks to a loophole inserted into the 2000 Commodity Futures Modernization Act by an unknown senator acting at Enron’s behest. Now investors such as Amaranth Advisors, a hedge fund that controlled more than half of all natural gas deals at one point in 2006, can corner the market and cause rates to skyrocket. Michigan Senator Carl Levin has been trying to close the Enron loophole for five years; he says it soon may be tied up for good.
—Rebecca Clarren

Of course, as any economist will quickly point out, such action will also come with a cost. Since carbon is going to have to get more expensive for markets to do their thing, someone is going to get hurt. So the next part of the equation involves figuring out who should bear that price. And here, interestingly, is another place where economic orthodoxy works pretty well. Take that shrinking cap on carbon emissions: One way to make it work is to hand out permits to big carbon producers—oil companies, coal companies, and so on—and steadily shrink the availability of permits. Those permits would be very valuable, and their cost would be passed on to consumers, whose price at the pump or off the back of the fuel-oil truck would increase. But the question is, How do you award those permits? (Or how do you set tax rates for carbon, etc.—the logic is the same.)

The answer favored by big industry is, Give us the permits. For free. Because we’ve spent years getting rich burning coal; if you’re going to interfere with the system, make sure you don’t touch the profits. But the more logical alternative is for the government to auction the permits off; with the proceeds we could, if we wanted to, simply send a check for, say, $1,000 to every American, which would go a long way toward covering the increased costs we Americans would face. This so-called Cap and Dividend concept—pushed for years by Peter Barnes, a cofounder of the progressive phone company Working Assets—is actually gaining some traction: Barack Obama, for one, has endorsed the permit-auction idea.

You could also, of course, take the auction proceeds and subsidize the transition to new clean-energy technologies—solar-thermal plants or windmills or whatever. This method has real attractions too, especially given that the most compelling analogies for the change we need come from the industrial boom catalyzed by World War II or the technological vigor of the Apollo era, both prompted by massive government spending. And consider that World War II was a three-year crisis for the United States, not a four-decade transition, and the moon shot was almost the opposite of our current task—instead of focusing immense resources on one mission, we need to spread them widely on a range of projects. In essence, we need to put all of us into orbit.

The weakness of our current government-spending model can be summed up in one word: ethanol. That is to say, the process is so twisted by regional interest, vested interest, and lack of interest by anyone but lobbyists that even when the political will is there to provide substantial subsidies, the results can be ludicrous. We are now spending billions upon billions to subsidize the conversion of corn to ethanol, a practice that creates the scantest possible environmental benefit while driving up food prices enormously. The main beneficiaries are the biggest of industrial farmers, and the losers include people around the world who now have considerably less to eat (and are increasingly figuring out that we’re to blame). Or take nuclear power: It’s far from the lowest-cost (or lowest-risk) option for our energy future, but it has a dedicated band of lobbyists eager to win massive federal subsidies. (See “The Nuclear Option“)

In the best of all possible worlds, a wise Congress would figure out just which technologies will work best, and how they can be implemented most efficiently. But that’s asking an awful lot. There are days when I’d be willing to give up every penny of the wind and solar subsidies we desperately need if that meant we could also kill the subsidies for “clean coal” and atomic energy—a level playing field, with the cost of carbon entered accurately into the equation, might be just what we need.

None of this means Washington doesn’t have additional work to do. For one thing, we don’t all start on a level playing field. Government must make sure that those disadvantaged by history get a boost from the coming economic transformation, and that those who can’t afford to insulate their homes get the help they need. And we need much higher levels of funding for basic research in energy conservation and generation—fundamental investigation of breakthrough technologies is not something business is good at. Oh, and buses, and subways. These are the reasons we pay taxes.

There’s a deeper flaw to my argument: Continuing to rely on a growth economy for change keeps us locked into the wider damage an ever-more market-centered civilization causes—the constant “creative destruction” beloved by economists and hated by those of us who would like to, say, live in the same community for a long time.

Which is why, in my ideal world, we’d use the power of democracy to add even more pieces of information to a market system. Tariffs that encourage local economies, for instance, because the data now show that more self-reliant societies are also more durable and more satisfying. Perhaps we should work for some totally different economic system—I hear pretty regularly from a different breed of skeptic who insists we’ll never solve our problems until we go “beyond capitalism.” But that debate is going to take a while—for the atmospherically relevant time frame, we’re not going to change our basic economic framework any more than we’re going to sign on to some new nature religion that would turn protecting the planet into some kind of Eleventh Commandment. Given how fast the ice caps are melting, speed is of the essence. And markets are quick. Given some direction, they’ll help.