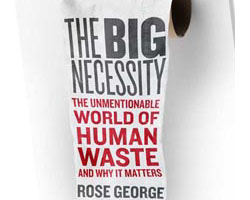 In her book The Big Necessity, British writer Rose George takes a long, hard look at our inefficient and environmentally unsustainable methods of disposing of human waste. Inadequate sanitation remains the world’s No. 1 health risk, and kills more people in developing nations than AIDS, tuberculosis, or malaria. Rose George talked with Mother Jones editor Jen Phillips about why one of the most distasteful subjects in the world might also be one of the most important.

MJ: So in your book The Big Necessity, you visited a number of countries, and one I was interested in was Japan, because the last time I went to Japan I was able to figure out the subway system, but not the high-tech toilet in my hotel room. And I was wondering if you could tell me a little bit more about the toilets you saw at the Japanese factories and why they have so many bells and whistles on them.

RG: Well, it’s been around for nearly 60 years. Sixty years ago Japan was a nation of pit latrines. They really had the most basic squatting latrines; they had no high-tech gadgetry, they wouldn’t even talk about toilets, it was considered very, very impolite—they didn’t discuss it. And over the last 60 years, the country has become sewered, for a start, and what’s known as a high-function toilet, which is also known as a robo-toilet, has become absolutely standard. Apparently more Japanese households have one of these high-function toilets than have a computer. And what a high-function toilet is is a toilet that has standard a heated seat, which comes in very handy in Japan’s freezing-cold winters, an inbuilt bidet nozzle, so it can wash you and also dry you, massage you. And then there are various other functions that can be added on. Some of them can play music, some of them can test your urine and your blood pressure. They’ve done this toilet revolution which as of now is still really only in Japan; the high-tech toilet hasn’t really spread.

MJ: Moving perhaps to the world’s less-developed nations, two of the world’s most populous nations, India and China, had very different approaches to sanitation. Can you kind of summarize those for me, and, if you know, kind of give me a clue as to which is better for the environment?

RG: Yes. India and China can be summed up quite simply in this way, in that India is what’s known as a fecal-phobic nation, and China is a nation that’s very much at home with its excrement. In India, it’s considered extremely unhygienic and impure to handle human waste, which is why the job of cleaning dry latrines and working in toilets and bathrooms is given to the untouchables, who are the lowest of the low in the Hindu caste system. Whereas in China, China has used human excrement as a fertilizer for 4,000 years, which you can smell, if you drive around rural China, even to this day. And there is an argument that that is why their agriculture has been so sustainable whereas others have died out over time. And the two major problems, well, they both face the same problems: They simply don’t have enough sanitation for their enormous populations. In India, India has an enormous problem of open defecation, which is people simply don’t have a latrine or anything, any kind of container, and they will just do their business wherever they can, which is generally by the roadside or in the brush, or in the…just whatever’s available. And this is obviously just a huge human health risk because human feces, it can be very toxic. They can carry millions of bacteria and viruses and worms, so you really don’t want it lying around in the open being tramped back on feet and on fingers and getting into food and water.

China, meanwhile, one of the big schemes in China is the biogas digestive scheme, which is a biogas digestion underground tank which you can install in a rural household. You can install it and connect it to your latrine and ideally a pigsty, because you need quite a lot in volume. Then the excrement is digested in an airless environment, and you can tap up the methane and use it to cook and also heat and also for light. There are apparently 15.4 million household digesters in China, saving people a lot of money that they would otherwise spend on fuel, and also helping out with China’s extremely severe deforestation problem.

MJ: It seems like biogas really makes, well, it turns something that would otherwise be wasted into something useful; why do you think the US doesn’t use this form of fuel on the scale that China does?

RG: Well, the problem in the US and in the rest of the Western world is that we have these extremely expensive but 150-year-old wastewater treatment systems. We have sewers, we have flush toilets, we have wastewater treatment plants, and they’ve been going for over 100 years in most places. And it seems that there’s no alternative because they do work: You flush a toilet, your waste is taken away, it’s treated. But it’s certainly not perfect. We use far too much perfectly clean drinking water when that’s becoming scarce in many areas of the US. They have problems dealing with what we put down the sewers and toilets, which can be anything from pharmaceuticals to artificial and natural hormones. And so a biogas digester, it doesn’t fit the system. It can probably be used in a rural household, but also the difficulty is that you do need quite a lot of volume for it. That’s why, ideally, you’d have—as someone said to me—a pig in every bedroom. But I think for now, this is a niche thing. That said, there is a scheme in Europe which is trying to install biogas in developed areas of Europe. There’s a very interesting program done in Lille, in northern France, and they’ve set up a system where their ten buses are fueled by biogas from the local sewage work. But it was expensive to set up and it required new infrastructure but it can be done. It’s just a question of addressing the fact that we do have a flawed system and that we could do it better, that we are wasting energy and water.

MJ: And in the US, in your book you talked about something called biosolids. Can you clarify for me exactly what a biosolid is?

RG: Biosolids is simply a different name for what was previously known as sewage sludge. The cleaned effluent, which is cleaned liquid, which is what sewage becomes, is discharged into a waterway or the nearest lake or river. What’s left behind, the dirt, is known as sludge; that’s a solid. It’s difficult to get rid of. So the most common use for biosolids in the US is application to land as a fertilizer.

MJ: Right, and in the book you talked about how people living next to these biosolid-covered fields were getting sick, particularly with staph infections. Were these infections antibiotic resistant?

RG: Yes. The theory is that, well, the sewage system contains, obviously, sewage from all sorts of people, and it’s got hospital waste, it’s got sick people in hospitals excreting into the sewer system, and you’ve got people being given all kinds of medicines and drugs ending up in the sewer systems. The argument is that you really couldn’t think of a better way than to combine all these different people and drugs, and it’s a really good way of breeding superbugs.

MJ: I was wondering if in researching this book it affected your daily life, if you had gotten a composting toilet or were just doing things differently.

RG: You mean me personally or in general?

RG: I don’t have a composting toilet, but I am thinking of getting one, or I’m thinking of getting a vacuum toilet; that’s the kind you get on ships or boats or planes, because they use very little water. I do think that it’s quite odd to throw six liters of clean drinking water down the toilet with every flush. But in terms of how my own behavior has changed, it has changed, but in quite small ways. For example, I’ll never pour oil down the sink again, because I’ve seen it down the sewer congealed in these massive, disgusting blocks that block the sewers, and they’re really very hard to get rid of and disgusting. So I don’t do that. I always put the toilet seat lid down since I learned about…um…spray. And I wash my hands better, I think. I always washed them before, but I do wash them a bit better now, a bit more thoroughly.

MJ: Well, thank you so much, I think that’s all I have for you.

MJ: Thank you so much.

That was Rose George, speaking about her book The Big Necessity with Mother Jones editor Jen Phillips. For more podcasts, check out motherjones.com.