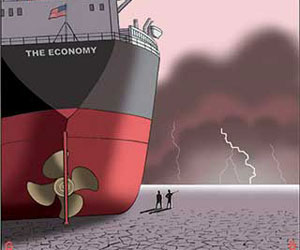 
When president George W. Bush assumed office, most of those disgruntled about the stolen election contented themselves with this thought: Given our system of checks and balances, given the gridlock in Washington, how much damage could be done? Now we know: far more than the worst pessimists could have imagined. From the war in Iraq to the collapse of the credit markets, the financial losses are difficult to fathom. And behind those losses lie even greater missed opportunities.

Put it all together—the money squandered on the war, the money wasted on a housing pyramid scheme that impoverished the nation and enriched a few, and the money lost because of the recession—and the gap between what we could have produced and what we did produce will easily exceed $1.5 trillion. Think what that kind of money could have done to provide health care for the uninsured, to improve our education system, to build green technology…The list is endless.

And the true cost of our missed opportunities is likely even greater. Consider the war: First there are the funds directly allocated to it by the government (an estimated $12 billion a month even according to the misleading accounting of the Bush administration). Much larger, as the Kennedy School’s Linda Bilmes and I documented in The Three Trillion Dollar War, are the indirect costs: the salaries not earned by those wounded or killed, the economic activity displaced (from, say, spending on American hospitals to spending on Nepalese security contractors). Such social and macroeconomic factors may account for more than $2 trillion of the war’s overall cost.

There is a silver lining in these clouds. If we can pull ourselves out of the malaise, if we can think more carefully and less ideologically about how to make our economy stronger and our society better, perhaps we can make progress in addressing some of our long-festering problems. As a road map for where to begin, consider the seven major shortfalls the Bush administration leaves behind.

the values deficit: One of the strengths of America is its diversity, and there has always been a diversity of views even on our fundamental principles—innocent until proven guilty, the writ of habeas corpus, the rule of law. But (so we thought) those who disagreed with these principles were a fringe, easily ignored. We have now learned that the fringe is not so small and includes among its numbers the president and leaders of his party. And this division of values could not have come at a worse time. The realization that we may have less in common than we thought may make it difficult to solve the problems we must address together.

the climate deficit: With the help of corporate accomplices such as ExxonMobil, Bush tried to persuade Americans that global warming was fiction. It is not, and even the administration has finally admitted as much. But for eight years we did nothing, and America pollutes more than ever—a delay that will cost us dearly.

the equality deficit: In the past, even if those at the bottom saw little or any of the gains from economic expansion, life was viewed as a fair lottery. Up-by-your-bootstraps stories are part of America’s sense of identity. But today, the promise of the Horatio Alger legend rings false. Upward mobility is becoming increasingly difficult. Growing divisions in income and wealth are reinforced by a tax code that rewards those who have lucked out in the globalization sweepstakes. As that realization sinks in, it will be even harder to find common cause.

the accountability deficit: The moguls of American finance justified their astronomical compensation by their ingenuity and the great benefits it supposedly bestowed upon the country. Now the emperors have been shown to have no clothes. They did not know how to manage risk; rather, their actions exacerbated risk. Capital was not well allocated; hundreds of billions were misspent, a level of inefficiency much greater than what people typically attribute to government. Yet the moguls walked away with hundreds of millions of dollars while taxpayers, workers, and the economy as a whole were stuck with the tab.

the trade deficit: Over the past decade, the nation has been borrowing massively abroad—some $739 billion in 2007 alone. And it is easy to see why: With the government running up huge debts, and with Americans’ household savings close to zero, there was nowhere else to turn. America has been living on borrowed money and borrowed time, and the day of reckoning had to come. We used to lecture others about what good economic policy meant. Now they are laughing behind our backs, and even occasionally lecturing us. We’ve had to go begging to the sovereign wealth funds—the excess wealth that other governments have accumulated and can invest outside their borders. We recoil at the idea of our government running a bank. But we seem to accept the notion of foreign governments owning a major share in some of our iconic American banks, institutions that are critical to our economy. (So critical, in fact, we have given the Treasury a blank check to bail them out.)

the budget deficit: Thanks in part to runaway military spending, in just eight short years our national debt has increased by two-thirds, from $5.7 trillion to more than $9.5 trillion. But as dramatic as they are, these numbers vastly understate the problem. Many of the Iraq War bills, including the cost of benefits for injured veterans, have not yet come due, and they could amount to more than $600 billion. The federal deficit this year is likely to add up to another half-trillion to the nation’s debt. And all this is before the Social Security and Medicare bills for the baby boomers.

the investment deficit: Government accounting is different from that in the private sector. A firm that borrows to make a good investment will see its balance sheet improved, and its leaders will be applauded. But in the public sector there is no balance sheet, and as a result, too many of us focus too narrowly on the deficit. In reality, wise government investments yield returns far higher than the interest rate the government pays on its debt; in the long run, investments help reduce deficits. To cut them is penny-wise but pound-foolish, as New Orleans’ levees and Minneapolis’ bridge attest.

There are two hypotheses (besides simple incompetence) about why Republicans paid so little attention to the growing budget shortfall. The first is that they simply trusted in supply-side economics—believing that, somehow, the economy would grow so much better with lower taxes that deficits would be ephemeral. That notion has been shown for the fantasy that it is.

The second theory is that by letting the budget deficit balloon, Bush and his allies hoped to force a reduction in the size of government. Indeed, the fiscal situation has grown so scary that many responsible Democrats are now playing into the hands of these “starve the beast” Republicans and calling for drastic cuts in expenditures. But with Democrats worrying about appearing soft on security—and therefore treating the military budget as sacrosanct—it is hard to cut spending without slashing the investments most important to solving the crisis.

The most urgent task for the new president will be to restore the economy’s strength. Given our national debt, it is especially important to do that in ways that maximize the bang for our buck and help address at least one of the major deficits. Tax cuts work—if they work—by increasing consumption, but America’s problem is that we have been on a consumption binge; prolonging that binge just postpones dealing with the deeper problems. States and localities are about to face real budget constraints as tax revenues plummet, and unless something is done, they will be forced to cut spending, deepening the downturn. At the federal level, we need to spend more, not less. The economy must be reconfigured to reflect new realities—including global warming. We will need fast trains and more efficient power plants. Such expenditures stimulate the economy while providing the foundation for long-term sustainable growth.

There are only two ways to pay for these investments: raise taxes or cut other expenditures. Upper-income Americans can well afford to pay higher taxes, and many countries in Europe have succeeded because of, not despite, high tax rates—rates that have enabled them to invest and compete in a globalized world.

But needless to say, there will be resistance to tax increases, and so the focus will shift to cuts. But our social expenditures are already so bare-bones that there is little to spare. Indeed, we stand out among the advanced industrial countries in the inadequacy of social protection. The problems with America’s health care system, for example, are well recognized; fixing them means not only greater social justice, but greater economic efficiency. (Healthier workers are more productive workers.) That leaves but one major area in which to cut—defense. We account for half of all the world’s military expenditures, with 42 percent of tax dollars spent directly or indirectly on defense. Even nonwar military expenditures have soared. With so much money spent on weapons that don’t work against enemies that don’t exist, there is ample room to increase security at the same time that we cut defense expenditures.

The good news about today’s bad economic news is that we’re being forced to curb our material consumption. If we do it in the right way, it will help limit global warming and may even force the realization that a truly high standard of living might entail more leisure, not just more material goods.