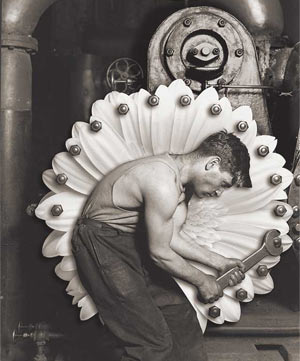 
Message discipline has never been one of the left’s strengths (oy gevalt), so it’s been somewhat astonishing to hear the chorus of support lately for “green jobs.” From city officials in Albuquerque and Minneapolis up to Nancy Pelosi and Barack Obama, more and more Democrats are framing climate change as “a moment of opportunity for innovation and job creation,” as Obama has put it, that can revitalize the flagging US economy. But occasionally, enthusiasm outpaces reality. Let’s sift through a few of the more popular claims.

Does the administrative assistant in the front office of a solar power company count? How about the vanpool driver? Using extremely generous assumptions, energy economist Roger Bezdek calculated that green jobs accounted for about 5 percent of the US workforce in 2006. That’s not shabby, but it’s a long way from a clean, green economy.

Working-class Americans still feel burned by nafta, when they were told not to worry about lost manufacturing jobs because they’d be trained for new, high-skill jobs. Clean-energy advocates, promising that jobs sent offshore by future carbon taxes will quickly be replaced, are now pushing an uncomfortably similar line.

But things may be different this time. There is already a relatively high demand for green-collar labor in manufacturing and the power sector, and a shortage of trained workers. In a 2005 survey by the American Public Power Association, half of utility employers said that at least 20 percent of their workers would be eligible to retire within the next seven years. Most of those 20 percent were highly skilled. Those vacancies avoid the main problem with the old nafta strategy: A job training program that’s not linked up to specific industries with documented demand for labor “never works,” says Dan Kammen, director of the University of California-Berkeley’s Renewable and Appropriate Energy Laboratory and a top environmental policy adviser for Obama. “But if you have a federal mandate for clean energy, and you have job training in association with industry, there is a big success route.” It’s worked in Germany, which added 57,000 jobs in the wind, solar, hydro, and biomass industries between 2004 and 2006. But in the US, where industrial and job training policy is still haphazard? That remains to be seen.

[ 3 ] Green jobs are primarily in wind and solar, i.e. the West and Southwest.

Consider wind turbines: Each consists of more than 8,000 parts, from ball bearings to fiberglass housing. A 2004 report from the national research firm Renewable Energy Policy Project found more than 16,000 US firms that could take part in that supply chain, most in the populous Southern and Midwestern states that have lost the bulk of the manufacturing jobs.

But renewable energy is only half the strategy. The other half, and the biggest job creator, is increasing efficiency—revamping buildings, cars, and appliances as well as improving transit, waste, and water infrastructure. Take the building sector (please)—it accounts for 39 percent of US carbon emissions. Driving up its energy efficiency may be the fastest and most cost-effective way to reduce emissions; by one estimate, 75 percent of buildings stand to be replaced or substantially rehabbed over the next 25 years. According to architect Edward Mazria, investing about $20 billion in building energy efficiency would save consumers $8.46 billion in energy bills annually (a less than three-year payback), replace 22 coal-fired power plants, reduce annual CO2 emissions by the equivalent of taking almost 16 million cars off the road for a year—and create more than 200,000 new jobs.

There’s nothing magical about a solar panel that makes it less likely to gravitate toward cheap labor—in fact, China already produces one-third of the world’s solar cells. If the US wants green manufacturing jobs, it will have to develop industrial policy to keep them here. Obama has taken a step in that direction by proposing $150 billion in spending over 10 years on green energy incentives and job training. And infrastructure jobs can’t be outsourced—retrofitting an economy must be done from the inside.

[ 5 ] The green-jobs movement can unite progressives across race and class lines.

While “green jobs” and “green-collar jobs” are often used interchangeably, the latter is actually a subset of the former—the blue-collar green jobs. And who gets the green-collar work? Labor organizations want them to replenish the declining pool of mid-skill, working-class manufacturing jobs. (Though actually, old distinctions between white-collar and blue-collar work may not necessarily apply here. Renewables are so hot, says Michele McGeoy, who runs a solar-photovoltaic installation training program in Richmond, California, that “College grads who want to get their foot in the door are willing to do labor.”) Meanwhile, community groups would like them matched up with recovering addicts, paroled felons, and at-risk youth.

Politicians are notorious for wooing white, working-class voters. If policy choices have to be made that favor either whites or poor minorities, who do you think gets screwed? The Green Jobs Act of 2007 set aside $125 million for green-collar job training. Just 20 percent was targeted for pathways out of poverty.

Proponents of fossil fuels tout job creation, but the truth is there aren’t many jobs in dirty energy, and that number is declining. To wit: Over the last two decades, coal output in the US has grown by a third, while the number of jobs in the coal industry has fallen by half. According to economist John A. “Skip” Laitner of the American Council for an Energy-Efficient Economy, for every $1 million of revenue in energy-related sectors, fewer than two jobs are created, compared to seven jobs per $1 million earned elsewhere. Thus, shifting investment away from conventional energy can’t help but create more jobs, particularly during the transition to a green economy, when construction, efficiency, and other labor-intensive industries will be scaling up.

The classic rebuttal to green-jobs hype: Putting people to work installing geothermal systems won’t help if green policies destroy more jobs than they create. In this year’s Senate debate over cap-and-trade legislation, for example, Republicans brandished economic models from the Environmental Protection Agency and elsewhere that predicted the destruction of up to 1.8 million jobs if a price is put on carbon.

Without getting into a discussion of econometric modeling (you’re welcome), suffice it to say many mainstream macroeconomic models are increasingly considered, in the somewhat intemperate words of ucla economics professor Matthew Kahn, “crap.” Their problem is a whole series of dubious assumptions that overstate costs and understate benefits.

Even as it tallies up specific jobs in specific industries, the green-jobs crew is missing a chance to confront the toxic premise that sustainability is at odds with economic growth. A country that takes on the massive task of creating a clean and efficient economy will put more people to work, create competitive industries, and ultimately make all jobs a little greener.