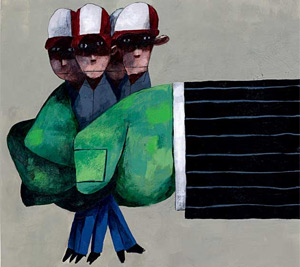 You don’t have to look far in the canon of the sustainability movement to get a sense of where labor fits into its world-transforming vision. In his enormously influential 1993 tract, The Ecology of Commerce, Paul Hawken hymns a new economic order where “certain industrial skills will become less valuable,” to be replaced by “biological knowledge and understanding” that “will provide the means to integrate human needs with the carrying capacity of natural systems.”

So, for example, farewell miners: “While coal mines will be shuttered, removing the last insult from the lives of men and women who have long suffered for the Industrial Age, opportunities in solar hydrogen will expand.” We will, Hawken continues in an air of distinct managerial chagrin, “no doubt try to protect the livelihoods of coal miners, much as the Luddites were legitimately concerned about the destiny of hand loom operators.” But we all know how that story turned out. When the civilizing mission of the postindustrial age beckons, well, then it’s time to put away your childish things—or your drills and pickaxes, as the case may be. As Hawken puts things, in high-visionary style: We must not hold up “the critical process of economic evolution in order to continue outmoded forms of production,” but rather “recycle lost livelihoods into the jobs of the future.”

Surprised to find such patrician talk in one of the founding manifestos of today’s sustainability movement? You shouldn’t be. The idea of sustainability, as envisioned by Hawken and other lead theorists, was to reconcile modern business civilization with the urgent mandates of preserving the earth’s household. It is, in other words, management theory, with its eye firmly fixed on maximizing production efficiencies—and its accounting hand eager to put the messier business of displacing workers, shuttering industries, and increasing the cost of living of the less well off far on the margins of that “framework of a broader perspective.”

And make no mistake, with Congress now beginning the slow, grinding work of drafting legislation to enact cap-and-trade mitigations of greenhouse emissions, the workers caught in the unfashionable brown precincts of industry will bear disproportionate costs. A 2004 study conducted by the University of California-Berkeley noted that measures to curtail greenhouse emissions by 20 percent by 2020 would entail fearsome losses for the old polluting industries: 23,900 jobs in coal mining, 61,400 jobs in oil and gas drilling, 6,300 jobs at oil refineries, and more than 60,000 jobs at electric and natural gas utilities.

The standard sustainabilist rejoinder to such grim accounting is that other economic sectors in a greener economy will flourish. And there is some truth to this—though it’s not the first time that American workers have heard such sunny rhetoric. After nafta, too, workers were assured they would be retrained to be credentialed members of the brave new information order. Then, too, their livelihoods were not so much “recycled” as kicked to the curb.

You see the strong business bias of the sustainability outlook in the present consensus scheme for curbing greenhouse emissions—a cap-and-trade market permitting polluters to trade, purchase, and sell carbon credits in the same way that air-quality trade schemes created incentives for polluters to clean up. By most accounts, a “true cost” pricing system that incorporates the environmental price of greenhouse gas emissions via a carbon tax would be a much fairer approach. By distributing the tax burden as widely—and as equitably—as possible, carbon taxes could help income keep pace with the price increases that such taxes would create. The increased public revenues could underwrite fuel-cost relief schemes, even—dare to dream—a functioning welfare state so that the working poor would not bear the brunt of higher prices.

Under cap and trade, by contrast, one surefire winner will likely be, you guessed it, Wall Street investment banking concerns brokering carbon credits to major energy companies. Goldman Sachs and Credit Suisse have already created US-based carbon-trading desks; Goldman also holds a 19 percent interest in the London-based Climate Exchange. The last time we let financial-services companies drive economic policy, we got the mortgage meltdown. What could possibly go wrong this time?

Meanwhile, the ecological returns on cap and trade are by no means a sure thing. In the European Union, where such a system has been in force since 2005, carbon emissions have not gone down significantly—indeed, they’re still rising. “Cap and trade doesn’t lead to all reasonable action being taken to reduce carbon emissions,” says David MacKay, a professor of natural philosophy in the physics department at the University of Cambridge. “It’s like saying, ‘Murder rates are a bit high in this city—let’s hand out murder permits to the people of the city, and have them trade them with each other, so as to arrange for economically optimal murder.'”

In fact, as Ted Nordhaus and Michael Shellenberger argue in their recent critique of progressive green politics, Break Through, truly cutting carbon emissions requires “the very thing environmentalists have long imagined to be the driver of pollution in the first place: economic development.” The environmental movement, they note, wrongly focuses on “strategies for regulation and sacrifice, not investment and opportunity.” Thus, for example, the obvious and urgent need for an enormous government R&D investment in alternative energy has not claimed pride of place on the lobbying agendas of “pollution-oriented environmental groups.”

Nordhaus and Shellenberger argue that the green movement’s historic disdain for economic growth is rooted in “an ethic born among the privileged patricians of a generation for whom building mansions by the sea was indistinguishable from advocating for the preservation of national parks.” From the moment the 19th-century British philosopher John Stuart Mill endorsed a “stationary state” economy—i.e. a no-growth system relying on an essentially fixed rate of production—the project of imagining an environmentally friendly economic order has been predicated on the urge to protect a vision of capital-N Nature from the industrial age’s gray, ungainly depredations.

It seems that carbon-control policy has taken its peculiar shape in part because environmentalists can’t seem to shed their class biases—or blind spots. The popular “feebate” mechanism, for example, imposes consumption taxes on high-carbon automobiles, home heating systems, and the like, while passing on the savings to savvier consumers. Now, there are sound reasons to suggest that feebates could speed up production of better, carbon-neutral consumer goods by ramping up market demand. But they also, like many such design-driven responses to the climate crisis, aim at rewarding the conduct of already privileged segments of the market—while advancing few immediate and practical remedies to market’s lower reaches. And as emissions-control measures, feebates, like cap and trade, are at best an ambiguous means of shaping actual consumer behavior. “They do nothing to influence how much vehicles are driven and risk [the] unintended consequence of additional driving,” concluded a 2003 study by the nonpartisan Resources for the Future.

Environmentalists are well overdue for a sharp, self-critical look at their track record on social equality, particularly as it pertains to the developing world. For decades, they’ve compiled an unlovely run of dour prophesying on how less-developed societies conduct themselves—from Paul Ehrlich’s never-ignited “population bomb” on down. This record is a central reason why policymakers in China and India have been able to so effectively counter the case for curbing carbon emissions: Once again, they argue, the West is pushing austerity on poorer populations after reaping the benefits of industrial development for itself.

But more than that, the sustainability movement needs to rethink a dogmatic opposition to industrialism and materialism—and, all too often, the people condemned to mere materialist livelihoods in industries that fall short of green ideals. Even hardheaded environmental thinkers like Nordhaus and Shellenberger readily fall into glib talk of a “post-material politics,” whereby social change mystically advances by “seeking individual authenticity.” In this new order, they lecture, there is no place for class resentments, which just breed “a culture and politics of victimization.”

It’s true that there’s been plenty of ill will (or indifference) toward environmental initiatives from organized labor. But at a time when even James Hoffa’s Teamsters have abandoned their support for oil drilling in the Arctic National Wildlife Refuge, there remains no logical reason why sustainable policymaking has to place Goldman Sachs’ interests above the afl-cio‘s. Green taxes can subsidize real growth sectors for the non-college-educated working class, who need more to subsist on than promises of the coming boom in solar hydrogen. Renewable construction projects can be concentrated in older urban neighborhoods now reeling from the subprime meltdown. Well-designed mass transit schemes could actually help urban service workers now condemned to unworkable commutes to the outer-ring suburbs.

But for any of this to happen, our prophets of sustainability need to form real political alliances with their counterparts in the labor movement—and to do so as their political equals, not as patrician managers who want to fine-tune workers’ consumption patterns while earnestly lobbying them out of a job. Other species may have devised more invidious survival strategies, but the surest path to human sustainability is through solidarity.