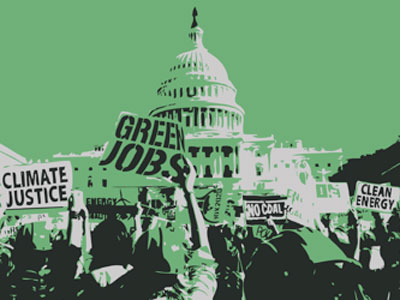 Every once in a while, this activism stuff is easy—you gear yourself up to push hard on a door, and the door turns out to be unlocked.

For months we’ve been gathering people from around the country for a big protest Monday—the first mass civil disobedience action about global warming in the nation’s history. Thousands are headed to Washington, to block the streets around the coal-fired power plant owned by the US Congress that powers Capitol Hill. It’s the perfect symbol of how dirty coal is: for those who have to breathe the DC air, for those who have to live by the scalped mountains of West Virginia and Kentucky, and for those who happen to live on a rapidly heating planet.

And now it’s the symbol of something else: how easy it would be to change.

Late last week, House Speaker Nancy Pelosi and Senate Majority Leader Harry Reid released a letter to the Architect of the Capitol, which is what they call the guy who runs the physical plant. It told him to figure out how to switch the plant over to natural gas. Just like that.

It wasn’t just the demonstration they feared–it was also the 12,000 young people now flooding in to Washington for Powershift ’09. (I’m writing this from the city’s convention center, surrounded by college kids busy networking, sign-making, and otherwise demonstrating what a movement looks like). Pelosi had promised to speak to the throng, and she was smart enough to figure out one thing that would be on their minds–she’ll get a well-deserved cheer when she appears. (UPDATE: Due to weather conditions in Washington, Pelosi canceled her appearance at the Monday rally.)

And not just for closing down the power plant, but for energizing the anti-coal movement with a quick and sweet victory. We’ll still be out there on Monday risking arrest, but it will be partly a victory bash. And partly a reminder that when you push on doors they swing open–sometimes even before you push.

It’s not usually this simple. But we’ll take it. (On Sunday, The Washington Post did report that the Architect of the Capitol has estimated that converting the power plant will cost $7.78 million and that this office did not know how quickly it could be done; congressional Republicans are asking the architect to determine if the plant could continue to burn coal but more cleanly.)

Meanwhile, we’ve had an interesting weekend here in DC. The cable news channels have been focused on covering CPAC, the conservative political action conference at the Shoreham Hotel. And sure, it’s kind of fun—the retreat of the dominant political ideology for the last three decades back into its cave, with the puffy figure of Rush Limbaugh still bellowing. But it’s also the past. The future—largely uncovered, but endlessly more exciting—was just a few blocks away, in and around Washington’s convention center. It’s been an activist heaven the last three days—a collection of incredibly talented people, most of them young, busy figuring out how to make the next few decades actually work.

Twelve thousand is a large number—I don’t know the last time in America that 12,000 activists gathered for anything. Much less anything as well-organized and determined as this. Panel after panel has covered everything from the efforts by 1sky.org to find a precinct captain for climate change in every corner of America to our campaign at 350.org to make October 24 the biggest single day of global protest ever. At night the big name entertainment (Santigold!) has mixed with the big name speakers: Van Jones, new EPA head Lisa Jackson, Interior Secretary Ken Salazar. It is—I can testify personally—something of a trip to talk to 12,000 people at a time.

Powershift was big when it started in 2007—6,000 kids gathered at the University of Maryland—but its doubling in size reflects the fact that the Obama campaign was no fluke. Young people really are ready to lead the way, which is a good thing since we have to clear so much wreckage from the last few decades. Jessy Tolkan and Billy Parish—and a crew of dozens and dozens of other young activists—have orchestrated this growing wave for years now, and managed to keep it simultaneously tough and yet open to reality. These kids are not devoted to cultural revolution—they’re busy figuring out how to use Twitter and Facebook to carry out the very real tasks of accelerating the switch in our energy system.

But everyone’s pretty brave, too. Across the street from the Convention Center, in a warren of converted warehouses, people were busy preparing for Monday’s protest. Many of the young people here are facing a tough job market—and so they listened soberly as an incredibly level-headed Greenpeace lawyer explains the ins and outs of being arrested. No one knows what the police will do, so it’s hard to gauge the exact risk. But suffice it to say, in the winter of 2009 it takes courage to risk an arrest record.

To keep that courage flowing, teams of artists next door were busy knocking out signs and banners—and also neckties, because the organizers have made it clear from the start that they hope protesters will turn out “dressed to impress.” Not just because they’ll seem “respectable.” But because it will remind anyone who’s looking on that the real radicals are those determined to keep pouring carbon into the atmosphere. The real radicals have been at the Shoreham cheering Rush Limbaugh. It’s odd to think of people collecting bail money and painting placards as the responsible middle, but as we move into the new post-Reagan world that’s how it works.