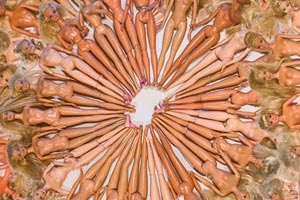 IN THE 1850s, the titans of the American billiards industry faced a vexing problem. A mere eight balls could be carved from the tusks of a large Asian elephant, but the species, once populous, had been hunted into near extinction—a casualty of the demand for ivory for everything from cue balls to corsets. Fearing the parlor game’s demise, manufacturer Michael Phelan offered a $10,000 reward to anyone who could create an artificial material that mimicked ivory’s unusual mix of pliability and durability. “If any inventive genius would discover a substitute for ivory, possessing those qualities which make it valuable to the billiard player, he would make a handsome fortune for himself, and earn our sincerest gratitude,” Phelan pleaded. When a New York chemist named John Wesley Hyatt subsequently debuted a synthetic ivory pool ball made from a compound called celluloid, it was lauded as revolutionary. Plastic had arrived, ready to save the planet.

More than 150 years later, the story could hardly be more different. As the most visible evidence of a disposable, trash-addled society, plastic has become the emblem of a world swimming in waste. Reportedly, plastic shopping bags are used an average of just 12 minutes before being thrown away. Every year, more than 500 billion plastic bags are discarded worldwide; they wave from tree branches so abundantly that South Africans have dubbed them their “national flower,” and no fewer than six countries have enacted bans. Shredded packaging fouls shorelines and turns up in the stomachs of trout, albatross, and sea turtles (which mistake plastic bags for jellyfish). In the Pacific Ocean, currents feed scraps into a thousand-mile-wide gyre of synthetic jetsam. (See Where Plastics Go to Kill.)

Plastic’s capacity for near-infinite proliferation initially seemed like a boon. Compared with wood or metal, it was seen as “an infinite material,” notes Jeffrey Meikle, the author of American Plastic: A Cultural History. Originally made from coal tar, the waste produced by coking coal for incineration, plastic used almost no extra resources and yet could be churned out by the ton. “It was a striking innovation,” Meikle says. “From the scrap heap of industry, you could create essentially as much plastic as you want.”

And therein lay the rub. Inexpensive to make and easy to discard, plastic morphed from an engineering triumph into a global scourge. In 1960, Americans sent 390,000 tons of plastics to the landfill; today we annually trash more than 28.5 million tons—around 11 percent of all municipal waste. Plastic doesn’t biodegrade, and the very characteristic that makes it so versatile—its protean ability to be resilient or stiff, soft or hard, opaque or transparent—makes it extremely difficult to recycle efficiently. Even the most common recyclable categories of plastic (No. 1 water bottles, for instance) consist of incompatible polymers with different melting points. In 2007, less than 7 percent of Americans’ plastic waste was recycled (mostly milk jugs and water and soda bottles), as opposed to 55 percent of paper.

A 2000 survey by the American Chemistry Council (ACC) found that fewer than half of Americans had a positive opinion of the miracle material; 25 percent “strongly believed” that plastic’s environmental negatives outweighed its benefits. The industry claims the ratings have improved, though it declines to release new data.

Even loyalists admit that plastic has an image problem. When I asked Robert Krebs, spokesman for the ACC, for ways in which plastic has benefited the environment, he sent me a digital dump of documents and studies—everything from an EPA review asserting the superiority of plastic grocery bags over paper (they take less energy to produce and transport, and consume fewer resources) to a report on the fuel savings from plastic car parts. But Krebs sounded glum when he contemplated plastic’s pariah reputation. “Fifty percent popularity puts you down there with the trial lawyers,” he said with a tired sigh. For a popular material, plastic is remarkably unpopular.

Yet there is still a case to be made for plastic. In the spring of 1980, a young researcher at the Worldwatch Institute named Christopher Flavin published a 55-page report titled “The Future of Synthetic Materials.” Obscure as it was, the paper created a stir. Flavin challenged the environmentalist dogma that plastic was an eco­logical disaster and was bleeding the country of large amounts of petroleum—in the midst of an oil crisis, no less. In fact, Flavin argued, plastics were uncommonly efficient, often taking less energy to produce than the materials, like aluminum and glass, that they replaced. And plastics were relatively thrifty, energy-wise. (Today, 120 billion pounds of plastic are generated each year using less than 5 percent of world oil supplies. In the United States, most plastic is made with natural gas, using about 5.6 percent of our gas output.) Moreover, plastics begat other savings, Flavin noted. They made packaging lighter, reducing the amount of fuel needed for shipping, and preserved food more effectively, meaning less breakage and waste. Plastic window tinting reduced the use of air conditioning, while spray foam insulation minimized heat loss.

Now the president of Worldwatch, Flavin has moderated his opinion of plastic. He now worries about toxicity (the carcinogens in PVC and additives such as bisphenol-A in food-grade plastics, for instance), plastics in the ocean, and solid waste, a byproduct of the “massive throwaway culture” that he believes plastics have engendered. Nonetheless, he still considers synthetics “one of the higher and better uses for oil,” especially on the carbon front. “It’s a better value for the material,” he explains. “You’re not throwing carbon into the atmosphere”—because making plastic doesn’t burn oil—”and the quantities are so much smaller than what we use for transportation. My guess would be that we’ll end up using oil for synthetic materials long after we stop using it for basic combustion.” Though he’d like to see us use a lot less plastic, Flavin recognizes that there aren’t always sustainable alternatives. “It would certainly be very difficult to live a plastic-free life today,” he says. “It’s in so many things. But there are a lot of problems with natural materials, too. There’s really no bright line between ‘natural is good’ and ‘synthetic is bad.’ The world is more complicated than that.” We may be stuck with plastic, but sometimes it may be the lesser evil.

However, plastic requires more than just an image makeover if it’s going to make a positive contribution to a more energy efficient, less disposable world. “I think the case is fairly clear that we need to stop wasting petroleum for single-use products, like plastic bags and water bottles that get used for a few minutes and discarded,” says Allen Hershkowitz, a senior scientist with the Natural Resources Defense Council. “What’s less clear is what we do next, and how we do it in a cost-competitive and ecologically sound way.”

The solution may be for plastic to keep doing what it does best—evolving, in essence, to become a better substitute for its current form. Flavin has hopes for the next generation of compostable plastics, like the corn-based plastic that’s turning up in cutlery and food packaging. These “natural” plastics are less toxic to produce and more easily disposed of, yet they still have complicated environmental lives. (See “Infinite Pest.”) Many plastics labeled as biodegradable will break down only in high-heat commercial composting facilities, not if they’re put in backyard composts or just left to the elements. Nonetheless, when they’re disposed of properly, bioplastics easily beat conventional plastics on the waste front. Future generations of bioplastics made from agricultural waste and produced with renewable energy could even be carbon negative.

The quest for the 21st century’s artificial ivory cue ball—a plastic that’s “nontoxic, totally biodegradable, easily recycled,” as Flavin puts it—has a long way to go. Market analysts estimate that it could be another 20 years before bioplastics make up even 5 percent of the global plastics market. Yet Hershkowitz says demand, and rising oil costs, will push companies like DuPont and BASF to pursue alternatives. “The writing’s on the wall for this,” he says. “And that’s a good thing.”

The key, explains Flavin, is to focus not solely on what new plastics will be used for, but where they will go when they’re thrown away, and then engineer them to break down accordingly. Making plastics whose final feat is to disappear without a trace, he says, “will be a complex engineering challenge that will keep many people employed for years to come.”