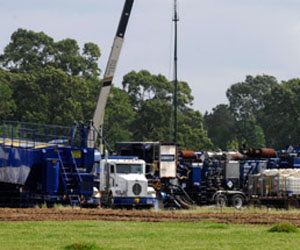 This story first appeared on ProPublica.

ProPublica has been reporting for months about how natural gas drilling is affecting the environment, but of all the causes for concern we’ve reported, here’s a doozy.

Sixteen cattle dropped dead in a northwestern Louisiana field this week after apparently drinking from a mysterious fluid adjacent to a natural gas drilling rig, according to Louisiana’s Department of Environmental Quality and a report in the Shreveport Times. At least one worker told the newspaper that the fluids, which witnesses described as green and spewing into the air near the drilling derrick, were used for a drilling process called hydraulic fracturing. But the company, Chesapeake Energy, has not identified exactly what chemicals are in those fluids and is insisting to state regulators that no spill occurred.

The problem is that both Chesapeake and its contractor doing the work Schlumberger, say that a lot of these fluids are proprietary, said Otis Randle, regional manager for the DEQ. “It can be an obstacle, but we try to be fair to everybody,” he said. “We try to remember that the products they use are theirs and they need them to make a living.”

Hydraulic fracturing—a process in which water, sand and chemicals are pumped deep underground at high pressure to break rock and release natural gas—is controversial because of the secrecy surrounding the fluids and because the process is exempted from protections of the Safe Drinking Water Act and thus from regulation by the Environmental Protection Agency. Congress is currently considering legislation to address these issues out of concern that fracturing, and the fluids and waste that are part of the process, may be contaminating drinking water in several states.

Hydraulic fracturing has made drilling more efficient and economical and has helped make vast new reserves of natural gas available across the country, including in New York, Pennsylvania, Texas, Wyoming, Colorado and Louisiana.

Scientists at the EPA and the U.S. Geological Survey have told ProPublica that it’s difficult for them to assess the environmental risks posed by hydraulic fracturing chemicals because the companies that use them won’t release the exact names and amounts of the chemicals. The energy service companies, including Halliburton and Schlumberger, say that disclosing that information would put them at a competitive disadvantage, and they insist the fluids are safe. Some information about the materials is made available through Material Safety Data Sheets, which can provide cursory medical advice for workers exposed to the chemicals.

The drilling companies have given Louisiana’s DEQ a large stack of these sheets. Randle said they contain some helpful information, but it will take the agency some time to weed through them. In the field where the cattle died on Tuesday, the DEQ reports finding a white milky substance on the ground, with cattle tracks leading away to the dead animals. Randle said he is almost certain the substance is a drill fluid or fracturing fluid.

A Chesapeake Energy spokesman told ProPublica that the company is cooperating with the state and is waiting for test results to determine how the cows died. Schlumberger did not immediately return calls for comment. If we hear from the company, we’ll let you know.

Abrahm Lustgarten is a former staff writer and contributor for Fortune, and has written for Salon, Esquire, the Washington Post and the New York Times. He is the author of China’s Great Train: Beijing’s Drive West and the Campaign to Remake Tibet.