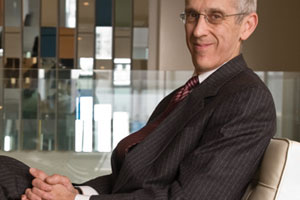 Editor’s Note: Last week, the House of Representatives narrowly passed the climate change bill on a 219 to 212 vote, with 44 Democrats voting against it. This was both a victory and a warning sign for the Obama administration, for it shows that President Obama may have a tough time assembling a filibuster-proof majority in the Senate. Watching this with great interest has been Todd Stern, the administration’s climate change envoy, who needs strong legislation out of Congress to strengthen his position in the ongoing international negotiations for a global climate change treaty. Here’s a profile of Stern from the current issue of Mother Jones.

ON EARTH DAY, Todd Stern, the Obama administration’s special envoy on climate change, came to the Senate Foreign Relations Committee to testify about the ongoing negotiations for an international treaty to reduce greenhouse gas emissions. A lanky and bespectacled 58-year-old with a long face and salt-and-pepper hair, Stern spoke quietly and deliberately as he sketched a scenario of doom: Carbon emissions are “rising far more quickly than expected,” he warned the committee. “We are at risk of creating a world where climate change disasters will drive millions of people across borders.” A strong accord, he said, is only possible if the United States significantly cuts its own emissions. Most of the senators seemed to agree—but not Sen. Jim Webb (D-Va.).

Webb, whose state is a midlevel coal producer, declared that there are loads of “unanswered questions” about the administration’s approach to climate change. He said that the Obama-backed cap-and-trade plan under debate in Congress would hurt US competitiveness. He grilled Stern on the planned climate summit in Copenhagen this December, where a successor treaty to the 1997 Kyoto accord is due to be hammered out: Would China, with its $2 trillion in foreign reserves, have the same emissions-cutting obligations as the United States? Stern explained that because China has up to 400 million people living in poverty, it—along with other developing nations—can’t be expected to cut emissions at the same pace as the Western nations that spewed most of the carbon in the atmosphere today. Webb was unconvinced.

Only weeks earlier, Stern had been cheered at a climate change meeting in Germany when he proclaimed that the United States was back in the game and “we want to make up for lost time.” Now he was being vigorously challenged by a member of his own party. In that moment, Stern could see that he was caught between Capitol Hill and, well, the rest of the world. His job is to negotiate a treaty that can yield meaningful global reductions; yet that treaty has to also win political support in the US, and in particular in the Senate, where two-thirds of members must approve it.

It’s a task akin to working a Rubik’s Cube. To convince the developing nations to accept real cuts, Stern must demonstrate that the US is serious about reducing emissions. To get Congress to go along, Stern has to show that the developing world will also make consequential cuts. But if Webb and other legislators don’t accept the idea of different cuts for different countries, they may be less inclined to pass the carbon legislation Stern needs to goose the developing countries. Call it a Chinese puzzle. And the planet’s future could be riding on his ability to put all the moving pieces in the right spots—in just a few months.

For placing him in this tough position, Stern can thank his longtime friend John Podesta, one of Washington’s most influential unelected machers. The pair first hooked up during Michael Dukakis’ 1988 presidential campaign, when Podesta recruited Stern, a Harvard Law graduate who had been working in a New York corporate law firm, into his opposition-research shop. “We were both skinny guys from Chicago who have focused on the intersection of policy, research, and politics,” Podesta says. “Neither one of us likes practicing law very much.” After Dukakis lost, Stern joined the lobbying firm Podesta ran with his brother. A Podesta recommendation later helped him land a job with Sen. Patrick Leahy (D-Vt.). And when Podesta became staff secretary in the Clinton White House, Stern came along as his deputy and eventually successor. (Among his early assignments was investigating the Travelgate miniscandal.)

In 1997, Stern was asked to spearhead the White House’s preparations for climate negotiations in Kyoto. It was a topic he had only a passing familiarity with: “I had read a memo here and there.” But the basic tensions closely resembled what Stern confronts now, with the US, Europe, and the developing world having vastly different notions of who should cut carbon and how fast. And the Americans and Europeans were at odds over an international emissions trading scheme that Washington wanted and the Europeans opposed.

As Stern drafted memos and oversaw interagency meetings, he developed a reputation as a get-it-done pragmatist. During the round-the-clock negotiations at Kyoto, he was “unflappable, knowledgeable, and a great coordinator,” recalls Stuart Eizenstat, the State Department official leading the US delegation. “He was keeping my feet to the fire” on emissions trading. At the last minute, a treaty was worked out and Clinton signed it. But he never sent it to the Hill, knowing that the Republican-controlled Senate would shoot it down.

After Kyoto, Stern stayed on the climate change detail for the White House. Then in 1999, he became counselor to Treasury Secretary Larry Summers. “Todd is smart, but there are a lot of smart people,” says Robert Rubin, Summers’ predecessor. “What he has is a lot of good judgment. In meetings, he would outline the considerations on both sides of an issue and weigh and balance them in front of people. That’s how he functions.”

Stern had established himself as a substantial Democratic insider, and he’d married a top Hillary Clinton aide, Jennifer Klein. There was nothing flashy about him except perhaps his over-the-top passion for the Chicago Bulls. His ambitions did not offend. His counsel was respected. He was regarded as a cool, calm, and serious player. “He’s not a political operative,” says Ricki Seidman, who worked with him at the White House.

After George W. Bush became president, Stern joined a DC law firm where he represented clients, including Citigroup, caught up in congressional investigations. He also registered as a lobbyist for two financial companies and a pharmaceutical firm. His work for these companies, he says, mostly involved drafting white papers rather than actual lobbying. Meanwhile, as a fellow at Podesta’s think tank, the Center for American Progress, he kept on the climate change beat. In a 2007 report, he and Podesta argued that creating “a low-carbon economy” ought to be “a top priority” of the next president and would entail reorganizing “the mission and responsibility” of the federal government. He became the “go-to guy” for Democrats on cap and trade, says Jamie Gorelick, a former Clinton Justice Department official who worked with Stern at the law firm.

After Obama’s victory, Stern saddled up with his friend once more, serving as the deputy director of the presidential transition Podesta ran before landing in the climate special envoy position—possibly the toughest job in what Podesta calls the administration’s “energy transformation/climate change basket.” On the day the appointment was announced, Stern called for “creative diplomacy to dramatically reduce emissions.” That was music to environmentalists’ ears. “He’s smart, experienced with international climate issues, strategic,” says Gene Karpinski, president of the League of Conservation Voters. “The challenge is to maintain a balance between being aggressive and getting something done. Todd falls on the side of wanting to get something done.” Stern, adds Dan Becker of the Safe Climate Campaign, “understands the politics are much more difficult than most people think they are.”

Sitting in his not-so-large, shoebox-shaped State Department office—the yellowish walls are mostly bare; framed photos of Stern and Bill Clinton are stacked on a table—Stern acknowledges the challenges ahead. He doesn’t know yet what, if anything, Congress will give him to bring to Denmark. The House may vote on cap-and-trade legislation by the end of the year, but there’s no telling whether the Senate will move. “If we don’t pass a bill, his negotiating position will melt like the Arctic ice,” says Rep. Ed Markey (D-Mass.), a lead sponsor of the cap-and-trade legislation.

Stern insists he doesn’t feel he’s being held hostage by Congress. And he has something of a Plan B: He can point to the administration’s own actions—$80 billion for clean energy and conservation in the stimulus bill, $150 billion in Obama’s 10-year budget, the EPA push to regulate greenhouse gases, and boosts in auto and appliance efficiency. “Other countries can see we are serious,” he notes.

But will that be enough to satisfy governments—including those that might exploit US sluggishness to justify holding back on their own emissions cuts? Moreover, Europe is calling for a 20 percent emissions cut below 1990 levels by 2020; the Obama administration backs only 15 percent below current levels, not near the reduction that many scientists say is required. “It has to be beyond tokenism,” says Rajendra Pachauri, head of the Energy and Resources Institute in New Delhi. “You can’t be in the lead if you’re following Europe.”

Stern insists the US targets are “robust,” and he notes that the administration has agreed to deeper long-term reductions—80 percent by 2050. He says he’s not worried about the difference in short-term schedules: “I don’t think this will be the place where negotiations will hang up.” He’s also pursuing other avenues for international cooperation—talks with China and negotiations among the world’s biggest emitters. “He doesn’t want to put all the eggs in one process,” says Rafe Pomerance, president of the Climate Policy Center.

In his office, Stern repeats what has become his mantra: “We have to be guided by science and pragmatism.” He explains, “If you ditch the science, the agreement won’t be strong. If you insist on scientific perfection, you can get a lovely agreement and a dead letter back home. And we’ll be back to Kyoto.”