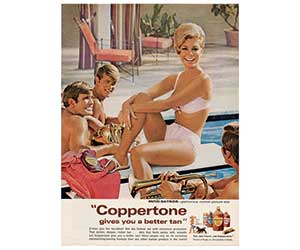 “DON’T BE A PALEFACE!” That was the slogan for an iconic 1958 Coppertone ad—the one with the frisky puppy tugging at the pigtailed girl’s bathing suit, revealing her perfect tan line. Not anymore. In the past 30 years, the incidence of melanoma, the most deadly form of skin cancer, has jumped 159 percent, and in just the past decade, the number of Americans diagnosed with skin cancer has increased by nearly a third. Epidemiologists blame several factors—ozone depletion, migration to the Sunbelt, the popularity of tanning beds and tropical vacations. Whatever the reason, the skin-care industry hasn’t missed a beat: Transforming suntan lotion into sunscreen and sunblock, it’s gone from promising sun worshippers enviably rich tans to guaranteeing solarphobes no color at all.

So if you’ve ventured into the sun protection aisle lately, you’ve probably noticed a distinct shortage of fun in the sun. “Advanced sunscreens technology shields skin 6 layers deep from skin aging UVA rays,” boasts an $11.99 tube of Neutrogena Age Shield Sunblock. Not to be outdone, Spawellness Extreme Protection SPF 100 claims that it actually “reduces the formation of melanin.” And even the Coppertone girl has kept up with the times: On the UltraGuard spf 70+ spray bottle, she’s still getting pantsed by a puppy, but is noticeably pastier than she was 50 years ago.

As a freckled paleface with a family history of melanoma, I’ve contributed my share to the $1 billion a year sunscreen market. I’ll admit that I usually go straight for the top-shelf tubes. But despite my spf 45 Neutrogena’s many advertised merits—”age shield” formula, antioxidants, and an impressive-sounding additive called Helioplex—sometimes I burn anyway, even if I’ve just been out for a short walk. Can sunscreen really provide perfect sun protection? Color me skeptical.

I’m not the only one wary of sunscreens’ sunny claims. Sonya Lunder, a senior researcher with the Environmental Working Group, says that many of the products are overhyped: Last year, EWG tested nearly 1,100 sunscreens and found that the majority are less effective than they claim. Among the most misleading are “broad spectrum” formulations that purport to block both UVA and UVB rays. (UVA penetrates the skin, causing wrinkles and other skin damage; UVB causes sunburns. Until recently, it was thought that only UVB caused cancer; now scientists suspect that UVA does, too.) Mona Saraiya, an epidemiologist at the Centers for Disease Control and Prevention‘s cancer division, is particularly worried about broad-spectrum claims, since manufacturers aren’t required to quantify the exact amounts of UVA or UVB protection. “SPF numbers don’t tell you how much protection those products provide from UVA,” she says. SPF ratings indicate a sunscreen’s overall strength, but don’t tell you which type of UV rays is blocked.

Also, the Food and Drug Administration requires sunscreens to be topical, which means that your skin won’t absorb them into the bloodstream. But last year, a CDC study found the common UVA blocker oxybenzone in the urine of 2,500 people who regularly used sunscreens. Another CDC study found that babies born to mothers whose urine contained significant amounts of one type of oxybenzone weighed noticeably more or less at birth than those in a control group. The highest concentrations of the chemical occurred in white women, who use more sunscreen.

The most effective alternatives to chemical sunblock are the “physical blockers” zinc and titanium, once synonymous with a look only lifeguards and Australians could pull off. Today’s products are more translucent, but aesthetic improvement comes at a price—many of them (Burt’s Bees SPF 15, for example) contain nanoparticles. Although a few preliminary studies have suggested that the nanoparticles in sunscreen don’t permeate the skin, nanotechnology still makes people nervous. With good reason: Not a lot is known about how chopping a substance into tiny pieces might change its properties and behavior.

EWG’s tests were the latest salvo in a decades-long campaign to shed some light on sunscreen (see the 1998 Mother Jones story “Sunscam“), but the FDA‘s rules for sunscreen labels have not changed significantly since the products fell under its jurisdiction in 1978. In 2007, the agency finally proposed new regulations: Manufacturers would be required to back their claims with more scientific evidence, and labels would include separate rating systems for UVA and UVB protection, a warning that sunscreen alone can’t prevent skin cancer, and an advisory that consumers should also wear protective clothing and limit their sun exposure.

Commonsense stuff, but the sunscreen industry has lobbied against it anyway. The Personal Care Products Council has recommended that the FDA stick with the current, vague spf rating system. Johnson & Johnson urged the agency to let labels say that sunscreens “help prevent” skin cancer, insisting that this “clearly conveys that sunscreens serve as just one part of a multifaceted skin protection program.” Since the initial proposal, not much has happened—an FDA spokeswoman would say only that it is “finalizing the rule.”

It’s unclear when the new FDA rules might finally take effect, or what form they will take. In the meantime, you can still protect yourself. Remember, says Martin Weinstock, chair of the American Cancer Society’s Skin Cancer Advisory Group, that sunscreen is not a coat of armor: Cover up, and if your shadow is shorter than you, seek shade. Forget the SPF 90, says the CDC’s Saraiya. SPF 30 blocks 97 percent of UVB rays, and SPF 45 blocks 99 percent—a negligible difference. You should apply two ounces of sunscreen every two hours—that goes for supposedly sweat- or waterproof ones, too. Check the ingredients, even if you bought your goop at Whole Foods: “All natural” is just another labeling claim. And if your tube is older than three years, it’s probably past its prime.

That oxybenzone may be seeping into my body doesn’t worry Weinstock so much as the cash seeping out of my pockets. “An inexpensive sunscreen properly applied is much better than an expensive one that sits on the shelf,” he says. Until the Helioplex hawkers convince me otherwise, I’m switching to the cheap stuff.

Update: Are sunscreens still shady? Environmental Working Group has released its 2009 Sunscreen Guide. I blog about it here.

* Correction appended: An earlier version of this story erroneously described “Sunscam” as a cover story. We have corrected the error.