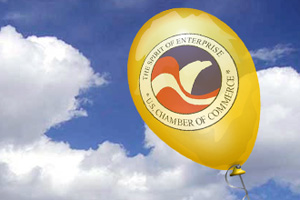 The nation’s largest business lobby may be much smaller than it appears. A review of archival press releases suggests that the US Chamber of Commerce—which will not disclose the names of its members—has vastly overstated its size in recent years, helping to make its controversial positions on health care and climate change look like a consensus of American businesses.

In testimony before Congress, statements to the press, and on its website, the Chamber claims to represent “3 million businesses of all sizes, sectors, and regions.” In reality, the number is probably closer to 200,000.

In February 1997, the Chamber’s membership figure mysteriously jumped from 200,000 to 3 million, where it has remained ever since. The first use of the bigger number came less than two weeks before Chamber president Richard Lesher retired, soon to be succeeded by current president Tom Donohue. In congressional testimony and a press release, the Chamber suddenly described itself as representing “an underlying membership of more than three million businesses and organizations of every size, sector, and region.”

The term “underlying membership” was meant to convey, subtly, that most Chamber “members” were at best loosely affiliated with the group. Since then, the Chamber has come to completely ignore this distinction, but not before a July 2001 press release touting one of its many corporate partnerships explained:

A spokesman for the US Chamber did not respond to a request for comment yesterday.

By counting the memberships of 2,800 local chambers as its own, the US Chamber is being deeply misleading. Unlike many true grassroots organizations, there is usually little or no relationship between the local chambers and the national organization. The Chamber “is not a governing body, chartering agent, or a regulatory agency for chambers of commerce,” its website explains, “and we have no say in how chambers decide to run themselves.” Nor do most local chambers have any say in the national group.  They do not get to cast votes for the Chamber’s leadership, which is beholden to a board of directors that is exclusively selected by other sitting board members, most of whom represent large corporations. Only one of the board’s 118 members represents a local chamber of commerce.

Apparently, the Chamber’s claim to “represent” the 3 million individual members of local chambers is solely based on the fact that those local chambers are members of the national group—even though many of those chambers’ individual members do not have a direct relationship with the national body. To get an idea of the tenuousness of this connection, consider the American Highway Users Alliance. Like the Chamber, the AHUA has worked to undermine climate legislation, and counts the American Automobile Association as a member, which itself has 51 million members. The AHUA has never pretended to speak for those 51 million drivers.

Generously assuming that each of the Chamber’s local partners has 2,600 individual members—that’s the size of the Chicagoland Chamber of Commerce, Chicago being the largest city represented—the program would give the national chamber a total membership boost of fewer than 1 million businesses.

By some measures, the Chamber’s ranks are shrinking. It claims close ties to some 800 state and local chambers that it has “accredited” at one time or another. Among other things, earning accreditation means “supporting principles of free enterprise and promoting pro-growth policies at federal, state, and local levels,” according to the Chamber website. However, only slightly more than a third of the chambers that were originally accredited remain so. A similar trend seems to have afflicted the Chamber’s other participating groups. In 2001, the Chamber represented 850 trade associations; its website now lists only 13.

As the Wall Street Journal and other papers reported several years ago, Chamber president Donohue grew the organization by attracting large corporations that could underwrite its activities. But that also undermined the Chamber’s claim to be a broad-based business coalition. Actual membership appears to have dropped, at least between 1997, when Donohue took over, and 2001, when it was pegged at just 150,000 companies by the above press release. Rather than acknowleging its narrower character, the Chamber has gone to increasing lengths to cover it up. “The U.S. Chamber of Commerce is the world’s largest business federation representing 3 million businesses of all sizes, sectors, and regions,” the Chamber’s website now says. But then it adds, as if the two things weren’t connected, “as well as state and local chambers and industry associations.”

UPDATE: A day after this story appeared, the Chamber quietly revised its membership number from 3 million to 300,000. We report the latest here.