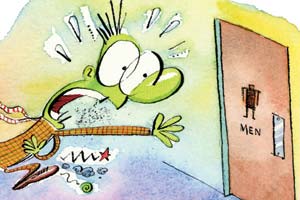 One day last year, Will Heidel and his wife were craving fish for dinner. They headed to San Francisco’s upscale Ferry Building Marketplace and asked a fishmonger for a recommendation. “He said, ‘Escolar, this is a great fish; you should give it a go,'” recalls Heidel. “So we went home and cooked the fish, and loved every single bite of it.” The fish was rich and silky, with a uniform white smoothness that was almost unreal.

A bycatch of tuna, escolar is often referred to as “white tuna” on sushi menus, as is the more common albacore. But the buttery fish is actually a kind of snake mackerel, a deep-sea bottom-feeder full of a wax ester that accounts for its dreamy velvety texture. Unfortunately, that oil is not digestible by humans and causes severe gastrointestinal distress in some people. It has earned escolar the nickname “Ex-Lax fish.”

Once a rare catch, escolar came on the scene in the past few decades after fishing vessels began using deeper-water longlines to catch tuna and swordfish. Along with escolar, the new equipment pulled up other deepwater fish rarely seen on the market before—Patagonian toothfish, orange roughy, monkfish, and rattail. As target species began declining due to overfishing in the ’60s and ’70s, the industry turned to the bycatch as potential new product. “From the perspective of the fishing industry, bycatch is not a good thing—it gets in the way, it causes more work, and there’s no market value,” says Geoff Shester, senior science manager of Monterey Bay Aquarium’s Seafood Watch program. “There is incentive in the seafood industry to develop markets for these species.” To wit: Fishermen catch one-tenth as much bluefin tuna today as they did in 1970, and the wholesale price of the coveted sushi fish has increased more than fiftyfold, from 14 cents per pound in 1970 to more than $7 in 2008. Meanwhile, catches and value of Patagonian toothfish—once considered an undesirable tuna bycatch—have skyrocketed since it first hit US plates in the late ’70s, thanks largely to a rebranding campaign by the industry to market the fish as a delicacy. They gave it a new name: Chilean sea bass. It worked so well, Chilean sea bass is now overfished itself.

Escolar has gone through its own rebranding; its current roster of pseudonyms includes “white tuna,” “butterfish,” “rudderfish,” and “Hawaiian walu.” Some government agencies warn consumers about the fish: In 2004, Washington’s health department issued a bulletin on it, and the European Union mandates that escolar and its relatives be sold only in packaged form with health warnings. The fish is banned outright in Japan and Italy.

But a US Food and Drug Administration spokesperson told me that the agency has never considered banning escolar; it merely “requests” that seafood manufacturers and processors inform potential buyers and sellers of the “purgative effect.” Some high-end chefs claim the fish is harmless in appetizer-size portions, and it continues to be sold in tony restaurants from New York (Eric Ripert at Le Bernardin loves it) to San Francisco, with customers receiving no warning. Shester of the Monterey Bay Aquarium says escolar likely won’t be the last rebranded sea creature. “We’re systematically going through what we can,” he says. “But there really aren’t a whole lot of truly unexploited fisheries left.”