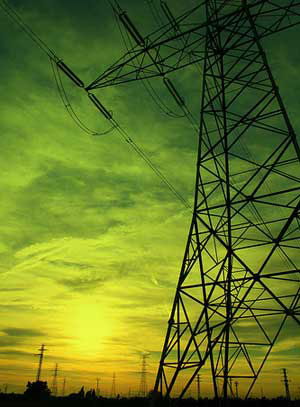 President Barack Obama likes to point out that when President Dwight Eisenhower built the federal highway system in the 1950s, he created a network that fueled postwar America’s economic rise. Now Obama’s administration wants to do the same for the green economy with the smart grid—a system of interlocking technologies that could transform the way we use electricity. By receiving real-time data on their energy use, consumers could save big on their power bills by running appliances when electricity is cheapest, rather than during peak demand periods when it’s most expensive. Power distributors could use the system to transport excess energy from one region to another, instead of simply allowing it to go to waste as they do now. The bottom line of such efficiency measures? The US would need to build far fewer new coal-fired power plants.

Unfortunately, what the US has now is an extremely dumb grid. It’s dilapidated—former Energy Secretary Bill Richardson has described the country as “a major superpower with a third-world electricity grid.” A patchwork system of regulation makes it practically impossible to move energy between some regions. The system loses approximately 9.5 percent of power through the distribution process alone. It provides no real-time information to consumers about how they could use electricity more efficiently. And at a time when the world is urgently trying to figure out how to slash carbon emissions, most of the US electricity system is geared to encourage the opposite result. Power companies turn profits by selling as much electricity as possible, creating an overwhelming incentive to burn more coal.

Last week the Obama administration moved to fix this state of affairs by rolling out $3.4 billion in spending for energy infrastructure and smart grid technology like in-home meters. The administration also announced a new agreement among nine federal departments and agencies that will make it easier to build new power lines on federal lands—a crucial improvement if the grid is to do a better job of moving and storing power.

Energy Secretary Steven Chu talked about the possibilities of the smart grid with Mother Jones in an interview.

Mother Jones: What will be the immediate impact of the new smart grid investment?

Steven Chu: [First] it’s a way of improving the system reliability. Before there are large blackouts, there are precursors to those things, and a smart grid will actually allow the utility companies, the power distribution companies to see these precursors. Secondly, we want to grow renewable energy as quickly as possible. If there’s excessive wind energy, typically what happens is it [gets] dumped. We need a grid to port it to somewhere else where we can store the energy. When clouds pass over a solar plant or the wind stutters you need the ability to automatically port energy from other places to fill that vacuum.

MJ: How much do you think can be gained in efficiency just through these smart grid measures?

Chu: You have a better ability to control your energy use and to use that energy more wisely. There are certain things that you can do that don’t really have to be done during peak energy demand times, which are typically in the afternoon. The smart grid will allow people to do this—don’t let your dishwasher or clothes dryer run on hot summer afternoons, run them at night. What does that mean? It means the utility company doesn’t have to build that next power plant, which means they get a better return on their investment, which means you can have a lower electricity [bill]. The [savings] estimate is on the order of $100 billion a year.

MJ: What role will the new agreement between nine government agencies play in paving the way for the construction of a better electrical grid?

SC: It’s a start. People don’t want power lines in their backyard. If you’re really heavy-handed, one ends up with lots of lawsuits. But ultimately one has to make a decision, because if everybody says “I love renewable energy, I love wind, I love solar, but I don’t want you to transmit that power in my backyard,” we will be in a stalemate. I’ve heard complaints that when you want to do something like building a transmission line, there may be three or five federal agencies and they’re not coordinated. We would like to try and streamline that process.

MJ: Right now almost our whole power sector is guided by the idea that you need to sell as much power as possible to make a profit. You’ve advocated for what is called decoupling, where utility profits would be separated from the amount of energy sold, eliminating the perverse incentive to burn more coal. A public utility commission could set the price, unconnected to how much power they’re delivering.

SC: It has to be decoupling plus. If you’re a utility company or a power distribution company, you get a return on your investment based on how much energy you sell. The business model is to sell more energy. As long as that incentive is there, there’s no real reason for any utility company to preach, seriously, energy conservation, because it conflicts directly with the duty to their shareholders of making more money.

If you do a decoupling, you say, “We will reimburse you for any costs you spend in trying to induce or encourage your customers to save energy.” But it’s just a flat-out reimbursement, so you’re still being paid for return on investment and might be induced to build a new coal plant. An alternate way of doing this [is what I call decoupling plus, where you look at historical energy use for utilities] and set efficiency goals, and as they achieve those goals, the providers will be kept whole. If the program does better than what historically we think you might do, you will be rewarded with a higher rate.

Now, how does that affect the consumer? On aggregate, the consumers can be better off, or at least break even, because they’ve been told how to save energy, which means they’re not buying as much. Their rate may go up, but what really matters is the bill. It’s aligning the profit motive exactly with where we have to get the companies to go, which is a lower carbon footprint.

MJ: Do you think utilities are starting to realize that efficiency is not such a terrible idea?

SC: You have to convince people that that’s a business model that works, that the shareholders can actually get as good a return on their investment. It’s counterintuitive. What we need to do is convey real-life examples of how you get as good a return on your investment when you are very serious about promoting energy efficiency. Most people, in their heart of hearts, do not understand how that is possible.