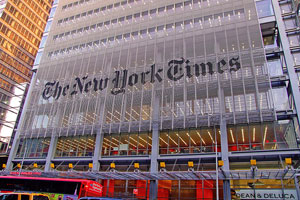 Nearly two decades after writing a book that popularized the term “global warming,” MoJo contributing writer Bill McKibben founded 350.org. He is chronicling his journey into organizing with a series of columns about the global climate summit in Copenhagen. You can find the others here. Check out MoJo’s live stream of collaborative Copenhagen coverage here.

John Broder of the New York Times provided the definitive analysis on Thursday, not just of the climate talks but of the planet. Unintentionally, I suppose—still, it’s brilliant. Here’s how he described the scene inside the Bella Center, in words that could have been dictated straight from the American delegation but didn’t need to be.  Because this is how power sees the world:

COPENHAGEN — If the United Nations climate talks here are entering their final two days in virtual deadlock, it is in large measure because of delays and diversions created by a group of poor and emerging nations intent on making their dissatisfaction clear.

The Group of 77, as it is called, has raised repeated objections to what its members see as the economic and environmental tyranny of the industrial world, often in florid language.

First, the problem is that poor nations have insisted on “delays and diversions.” Delays? Diversions? For the twenty years that we’ve known global warming is the worst problem the world has ever faced, the United States has managed a perfect bipartisan record of no action at all. Recessions aside, we’ve poured ever more carbon into the atmosphere. Our biggest companies—ExxonMobil, for instance—have spent millions upon millions to sow doubt about the science. We’ve had presidents who’ve denied the existence of global warming, and presidents—Bill Clinton and Barack Obama—who have placed it far down on their list of priorities, devoting precious little in the way of political capital to building any strong national consensus. Now we’re trying to ram through Copenhagen  a treaty that would raise the planet’s CO2 concentration to 770 parts per million by 2100, guaranteeing a planet-withering inferno, all because we’re terrified that the action science demands would crimp the growth of the largest economy the world has ever seen. Today a planeload of Congressmen will arrive, each intent on using the stage provided here to further their own political careers. Delays, diversions?

Second, the Group of 77 is conducting this campaign of delay and diversion by objecting to what its “members see as the economic and environmental tyranny of the developed nations.” That would be a silly thing to do, wouldn’t it? It sounds so clichéd, so 1960s. So let’s think about “environmental tyranny” for a minute. The developed nations have produced roughly 80 percent of the world’s global warming gases, and done so for the benefit of a tiny fraction of the planet’s population. China is now producing as much co2 as the US, a fact that the Americans point out on the stroke of every quarter hour. But China has only been doing it for a decade, and their population is four times ours—they could “solve” their climate problem by dividing into four countries, each with an American population and only a quarter the carbon emissions. The rest of the developing world barely registers on the carbon map—check out the table of who emits what if you want a snapshot of power in this world.  We’ve melted the sea ice of the Arctic—the carbon that accomplished that feat was emitted while the Chinese barely registered. The rapid melt of Himalayan and Andean glaciers—that’s mostly American carbon doing the trick. Ditto the droughts across Africa. Tyranny is a single ruler exercising unaccountable power. Close enough.

Third, these countries are conducting their campaign of delay and diversion by using “florid language.” Here’s what the president of the Marshall Islands said: “If we sink beneath the waves, you will have destroyed our entire race.”  That’s strong. But consider: the Marshall Islands were settled in the second millennium BC. They navigated their vast atoll by using “stick charts” to track the stars. They have a sophisticated clan system, and an ancient language. In December of 2008 they declared a state of emergency when waves began washing across the capital city, which is a meter above sea level. The consensus prediction for sea level rise this century if half-measures like the ones proposed by the United States are adopted is more than a meter. Are they not supposed to be “florid”?  What language would the US adopt if the Marshallese somehow had the ability to put us in the same peril? Would we even bother with language, or might we put on a florid display of military might?

The bravery of the small nations in standing up to the pressure from the big ones is the wonder of this conference. When you read stories like Broder’s, you get a little sense of the annoyance the British must have felt when the Indians (or for that matter the Americans) started getting uppity way back when. It’s likely that in the next 48 hours the great powers will be able to quash that show of spirit (moments ago Hilary Clinton pledged $100 billion by 2020 for poor countries, from some not-yet-understood tax on international monetary transfers). But for the moment, the resistance is a sight to see.