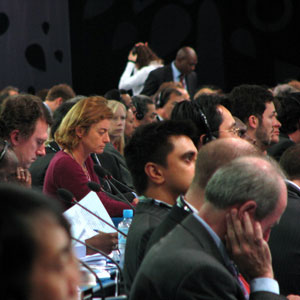 When US climate change envoy Todd Stern arrived at the massive Bella Center for the first time and held a press conference on Wednesday, he noted he would be working for the “strongest possible agreement.” He quickly ticked off all the actions unilaterally taken by the Obama administration to redress climate change: boosting fuel economy standards, designating greenhouse gases a threat to human health that should be regulated under the Clean Air Act, and establishing a regime to measure and monitor global warming gases produced by major emitters. He fiercely defended the administration’s proposed reduction in emissions—about 17 percent below 2005 levels by 2020. Knowing that the United States has been widely criticized for not offering to cut more—and that the Europeans have agreed to deeper cuts—he pointed out that the US reductions would accelerate in the following years. He also said that the United States was ready to start financing an international fund to help poorer countries deal with climate change. And he reminded his audience that President Barack Obama would be attending the summit. The message: we’re committed, and this summit could work.

While it does seem that most governments would prefer to see a strong climate agreement reached in Copenhagen, they recognize that due to serious conflicts, that might not happen. Consequently, they are preparing for a storm of finger-pointing. At an earlier press conference, negotiators for the European Union griped about a move by China and developing nations to block a wide-ranging discussion of emissions reductions, including their own. (China and the others would like to stick with the 1997 Kyoto Protocol, which didn’t subject them to reduction targets.) This was “disappointing,” Anders Turesson, the Swedish climate negotiator said, suggesting it would thwart progress at Copenhagen. Meanwhile, Lumumba Stanislaus Di-Aping, the Sudanese chairman of the Group of 77, the world’s poorer nations, assailed the United States and European Union for being stingy by only offering $10 billion annually in climate change funds for less developed countries. “Ten billion dollars is not enough to buy us coffins,” he groused. (And Tuvalu, an island nation in the Pacific, walked out of the proceedings on Wednesday, expressing concern that Copenhagen would not produce a legally binding treaty.)

So China and other developing nations (such as India, Brazil and Indonesia) say it’s up to the United States and its fellow industrialized countries to make a deal work—by going first in adopting serious reductions and by ponying up money. (“They need to add a zero,” one delegate said.) And the United States and the Europeans insist an agreement is only possible if China, India and the others climb aboard the Reductions Express.

At the press briefing, Stern showed that he knows stats about Chinese emissions as well as he knows stats about American emissions. He observed that by 2020, China’s emissions will top those from the United States’ by 60 percent, and then by 80 percent in 2030. In ten years, he added, China will be responsible for 28 percent of the world’s total greenhouse gas pollution. “Our emissions are pretty much flattening and then will go down,” Stern said. “You just have to do the math…We can’t get the reductions we need globally if China is not a major player.” Even though China and other developing countries have proposed reductions—in China’s case, it’s essentially a cut in the pace of its emissions growth—Stern chided these countries for not being willing to incorporate their targets into an international agreement. Other countries, Stern said, need to know that these proposals are “not just a domestic press release.”

Some observers at the summit believe that China and the United States have already reached a deal and much of what is transpiring in Copenhagen is little more than diplomatic theater. Yet members of the US delegation, speaking not for attribution, insist there’s no deal. And they roll their eyes—as if to say, I wish—when asked about this. Stern expects to spend the rest of the conference in intensive negotiating sessions. At the press conference, he noted that the goal now is a political agreement that would “incorporate strong first steps”—which ideally would include immediate commitments for specific actions from all significant emitters and short-term financing for those less developed countries. These actions would supposedly be a precursor to a hard-and-fast treaty. As Stern added, “The last thing we want is a politically binding agreement to substitute for a legally binding treaty.”