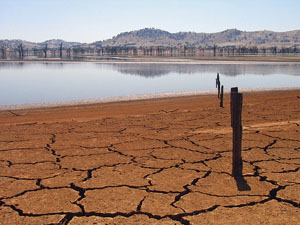 Throughout Thursday—supposedly the second-to-last-day—multiple plenary sessions and working groups toiled frenetically, trying to resolve a host of controversies over procedure and substance, as heads of states delivered largely irrelevant speeches in the main hallway. At different press conferences, European officials called for merging the two dueling negotiating tracks under way in the Bella Center—it’s complicated, but essentially the non-binding track includes the United States; the binding track does not—and African nations called for preserving the tracks as they are.

But the big show was the United States-China face-off. First, Secretary of State Hillary Clinton made a surprise announcement that the United States would help raise a fund of $100 billion annually until 2020 to assist poorer nations to contend with climate change—only if China and other major developing nations place their now-voluntary emissions limits into a binding agreement and subject their curbs to verification. Then the conference waited for China’s response. Hours later, Chinese vice foreign minister He Yafei took the stage in the press briefing room and delivered a 20-minute presentation in which he did not explicitly mention Clinton’s offer. Although he promised to “make our actions transparent” and “improve…ways of national communications,” he also stated that China’s reduction efforts should not be subject to supervision. These remarks were decidedly open to interpretation, keeping alive the headline-generating USA-vs-China narrative.

Yet despite all this balance-of-power drama, the issue remained: could this conference produce a worthwhile agreement that could lead to policy changes in sync with the science? At this stage, a treaty is not an option. There are far too many questions to resolve. The next best thing is an agreement—what’s widely referred to as a “political agreement”—that would set a solid stage for negotiating a more ambitious treaty within the next year. But such a pact would have to include some firm (or quasi-firm) provisions.

Various advocates trolling the hallways of the conference center have their own recipes for a deal that could be considered a minimal success. Tom Brookes, head of the energy strategy center at the European Climate Foundation, a nongovernmental think tank, has identified several issues that would have to be incorporated into a (relatively) successful non-treaty: a goal of limiting the average global temperature rise to 1.5 to 2 degrees Celsius; a 50 percent cut in worldwide greenhouse gas emissions by 2050 (with developed nations decreasing their emissions by up to 95 percent during this time); binding emissions curbs for industrialized nations and voluntary action by developing nations consistent with global targets; specific figures for short-term international climate change funds and guidelines for establishing long-term financing; agreement that verification systems need to be developed (for tracking both emissions reductions and international financing); some sort of answer to the bedeviling two-track diplomatic problem; and serious money for deforestation prevention programs.

But if this package contains only the reductions currently placed on the table by the major emitters, Brookes warns, carbon dioxide concentration in the atmosphere will likely climb from the current 388 parts per million to 550 ppm. That’s well above the 450 ppm advocated by the United States and far above the 350 ppm goal scientists have urged. Still, Brookes says, “if there is no deal now, we will end up lacking the instruments we need to get a start.”

Gene Karpinski, the president of the League of Conservation Voters, concurs that a political document based on the existing proposed reductions would “no doubt have numbers that are inadequate, but once it’s in place you can build upon it.” Similarly, Elliot Diringer, vice president of international strategies for the Pew Center on Global Climate Change, says this sort of agreement is “likely to fall short of what the science says is needed in the years ahead and will be disappointing to everyone who feels the need to move forward, but we must capture the progress that has occurred and preserve a clear pathway to a legally binding agreement.”

As the negotiations continued behind assorted closed doors, policy-through-politics realism collided with real life. Referring to the 2-degrees target advocated by the United States, China, India, and the Europeans, Tuvaluan Prime Minister Apisai Ielemia declared, “they should know from the science it will be killing people around the world. I will not sign anything that’s not less than 1.5 degrees.” (Over 100 nations have demanded a 1.5-degree goal.) Ghana’s climate envoy, William Agyemang-Bonsu, noted that a 2-degree rise would be “disastrous” for Africa and that “a consensus of 2 degrees is not in the interest of Africans.” (The Intergovernmental Panel on Climate Change, the United Nations body that produces the research underpinning the climate talks, has concluded that a 2-degree hike could cause 1.8 billion Africans to suffer from severe drought.)

On Thursday afternoon, the science-based fears of officials from developing nations received a boost—in the form of a leaked document that had been produced by the convention’s secretariat. It revealed that the current reductions pledged by the major emitters would “produce an unsustainable pathway that could lead to concentrations equal or above 550 ppm with the related temperature rise around 3 degrees Celsius.” Here was proof that the summit was on the brink of producing a non-binding, best-we-can-do agreement that was guided by politics, not science—and was not even in line with the supposed target of 450 ppm and a 2-degree temperature limit.

As President Barack Obama was preparing on Thursday afternoon to leave Washington for Copenhagen, White House officials, on a background conference call with reporters, said they were now worrying less about the Chinese matter and fretting that the developing nations’ insistence on two tracks would somehow scuttle a political agreement. “It’s impossible” to tell if there will be a deal, one senior administration official said, but the aides noted they were more optimistic than earlier in the week. The Obama officials didn’t address the contentious 1.5-degrees controversy. Neither did Clinton. By the way, during her press briefing, she uttered the word “science” not once.

[UPDATE: A tough speech Obama delivered in Copenhagen on Friday morning suggested that a deal was far off.]

Moments before Clinton played her $100 billion card, Algerian climate envoy Kamel Djemouai was asked if the major negotiators have been guided by the available science. “It seems no,” he replied. “I’m not sure humanity will forgive them in the next 50 years.”