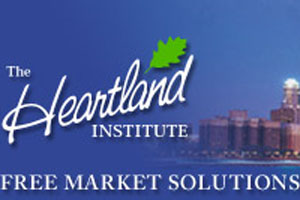 The Heartland Institute has a long history of shilling for corporate lepers. Since 1993, it has received $190,000 from Philip Morris USA and maintains a smokers’ rights section on its website called “The Smoker’s Lounge.” Its global warming section is more active. It features a handy list of denial talking points (“Scores of peer-reviewed studies contradict global warming alarmism”) and links to full-page ads Heartland has run in the Washington Post decrying the media for hyping “false claims of impending ‘planetary emergencies.'”

Heartland, which has received $670,000 from ExxonMobil and its foundations since 1998, views itself as a bulwark against a leftist domino effect. “Fighting global warming extremism is essential,” its website says, “if we are to stop a resurgence of radical environmentalism and left liberalism on a wide range of other public policy issues.”

In June, the Heartland Institute held its Third International Conference on Climate Change in Washington, DC, “to expose Congressional staff and journalists to leading scientists” such as Craig Idso, Lord Christopher Monckton, and Anthony Watts. The conference was cosponsored by Americans for Prosperity, the Science and Public Policy Institute, and the Competitive Enterprise Institute, which has received more than $2 million from ExxonMobil and its foundations since 1998. In the conference’s concluding address, Sen. James Inhofe (R-Okla.) complained that his opponents had called him “Dumb, crazy man, science abuser, Holocaust denier, villain of the month, hate-filled, warmonger, Neanderthal, Genghis Khan, and Attila the Hun.” But, he added, “I’ve got 20 kids and grandkids, and they think it’s great.”

Heartland has jumped on Climategate with a vengeance. The stolen emails at the center of the storm “reveal a conspiracy to falsify the actual temperature record and silence so-called ‘skeptics,'” it writes on its website. “Anyone who continues to cite the IPCC as representing the ‘consensus’ on global warming is wrong. The IPCC has been totally discredited.”

Despite Heartland’s corn-fed name, it also funds foreign denial groups. Its 2007 tax filing lists $120,000 in donations to four groups in Canada and New Zealand that oppose signing a new climate agreement in Copenhagen. In October, one recipient, Canada’s Frontier Center for Public Policy, sponsored an event at the Calgary Petroleum club called “Apocalypse Cancelled,” where Monckton will discuss “the non-problem of anthropogenic ‘global warming.'”

Heartland stopped disclosing its donors in 2004 after being “punished for doing so” by the liberal media, explains Heartland president and CEO Joseph Bast. He insists that 95 percent of Heartland’s funding now comes from “non-energy and non-tobacco sources” and that internal policies insulate staff from the influence of donors: “Try saying this very slowly, several times and out loud: ‘They aren’t in this for the money.'” Heartland says that it stopped taking money from Exxon in 2006.

Bast declined to reveal the recipients of Heartland’s $182,000 in overseas grants in 2008, and the group’s tax filing doesn’t name them. (The tax code requires foundations to disclose any donations greater than $5,000.) He would only say that Copenhagen negotiations “make our work on climate change especially timely and relevant, but influencing those negotiations is not our purpose.”

Click here for the next member of the dirty dozen.