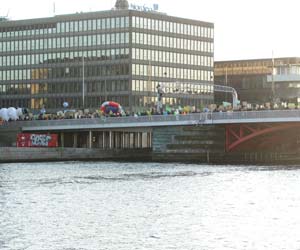 Nearly two decades after writing a book that popularized the term “global warming,” MoJo contributing writer Bill McKibben founded 350.org. He is chronicling his journey into organizing with a series of columns about the global climate summit in Copenhagen. You can find the others here. Check out MoJo’s live stream of collaborative Copenhagen coverage here.

I have read, on occasion, global warming denialists who insist the whole thing is a plot to produce a “world government.” If there’s anyone here in Copenhagen who dreams of such a thing, they may be having second thoughts—as it turns out, the UN is unable even to figure out how to manage the flow of people in and out of the Bella Center. Somehow taken surprise by the thousands of people who had carefully registered in advance, the lines now stretch half a kilometer just to reach the metal detectors.

The UN solution, in part, is to reduce dramatically the number of pesky NGO people allowed inside the hall. On Wednesday Friends of the Earth International was shut out altogether; by Friday, when Barack Obama arrives, some 500 of the 25,000 or so accredited NGO representatives will be permitted to enter the giant hall. If you’re ever looking for a numerical definition of tokenism, that should suffice.

But the joke, in a sense, may be on the rest of the conference. After all the giant globes, endless late-night sessions debating paragraphs, wraparound ad campaigns and so on, one of the first substantive declarations of these talks came from…1,230 kilometers away in Paris. The Ethiopian leader Meles Zenawi stopped there en route to Copenhagen for a little meeting with French President Nicolas Sarkozy. And apparently en route he’d taken a phone call from some guy named Barack Obama. And that was enough to persuade him to sign off on, in essence, the American deal. Two degrees. (Never mind that the IPCC had made clear that two degrees more heating means four degrees in Africa, which means better find some habit to replace eating.) $10 billion in “fast-start” financing. (Given the 4 billion people in the developing world, that’s $2.50 apiece; sorry about that global warming, but enjoy this fries-and-a-Coke.) This is how power works. The US president doesn’t want to put political capital on the line to push the US Senate, so the leader of the African negotiating bloc gets the word, and the deal gets cut. It’s wonderfully naked, and the extra bonus up-yours was cutting the deal along the Champs Elysees.

There’s been “pushback inside the hall.”  The wonderful Desmond Tutu immediately put out a statement. “A global goal of about 2 degrees C is to condemn Africa to incineration and no modern development,” he said. But the divide and conquer tactics grow steadily stronger—it’s incredibly difficult for tiny and poor countries to withstand this kind of pressure. I’ve heard credible reports from one African country that the Chinese promised two hospitals were they to vote the right way, and from one island nation that their IMF loans have been threatened. On the other hand, there are folks applauding Zenawi for preventing “collapse” of the talks.

All of which is to say that there’s a sense that this enormous gathering has been something of a sham. The real action has always been outside. In national capitals, in those fabled boardrooms and backrooms. But also in the streets. We’ve only had a discernible global grassroots movement about climate change for a year. It built to a remarkable crescendo on October 24, with what CNN called “the most widespread day of political action in the planet’s history.” But it hasn’t yet had time to fully penetrate down into the depths of this process. It’s a player, but not yet as strong a player as the guys calling the shots today from Washington and Paris.