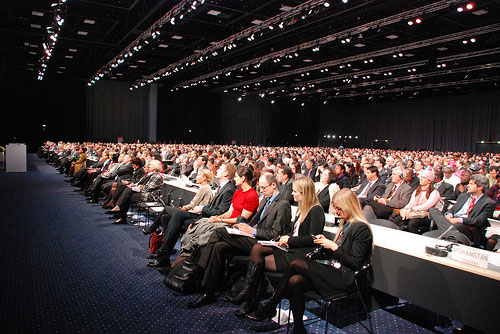 At his second press conference at the Copenhagen climate summit, US chief negotiator Todd Stern said the Obama administration is aiming for an agreement that would limit the expected global temperature rise to 2 degrees Celsius. This target has been one of the most contentious issues of the convention; small island nations and African countries have declared they cannot survive such an increase, which could actually mean temperature boosts of 3 to 4 degrees in their regions, causing profound drought and the loss of land. More than 100 nations have urged a target of 1.5 degrees or less. Explaining US opposition to that mark, Stern said he wouldn’t criticize his “friends” advocating 1.5 degrees, but “we’ve got to combine science and pragmatism…If we could get done on a deal that is in the 2 degree framework, that would be a great start.”

The next day, scientists of the Intergovernmental Panel on Climate Change—the group whose research provides the scientific underpinning for the ongoing negotiations—gathered in the same spot. After they had finished explaining yet again that the science on climate change is extensive and undeniable, I asked Thomas Stocker, a physicist and co-chair of an IPCC working group, if the United States’ proposed 17 percent reduction in greenhouse gas emissions (below 2005 levels by 2020) is sufficient to reach the 2-degree target cited by Stern. Stocker replied, “Very unlikely.” He added that even a reduction of 20 percent below 1990 levels “is simply not enough.” In other words, the US position—a 2-degree goal and a 17 percent cut—is fundamentally inconsistent.

The Copenhagen conference is a collection—or clash—of assorted realities, as science, politics, policy, and diplomacy collide. In the cavernous Bella Center, thousands of government officials, activists, and journalists mill about, darting to plenary sessions, press conferences, and working group meetings. Accredited protesters walk about with placards demanding action. Nongovernmental organizations from around the world have set up booths staffed by earnest do-gooders advocating dramatic change. And weary-looking veteran climate diplomats scurry about, attending overly formal public sessions and trading hallway gossip about what is happening in closed-door sessions involving the major players (read: China and the United States).

All these people generally agree that there’s a problem and that something must be done. This consensus aside, profoundly different views are at conflict within the Bella bubble—and these differences could scuttle any final agreement.

There are activists and scientists, as well as officials from the most at-risk nations, who say that there must be only one imperative: to slash emissions immediately to reach the most stringent goals (keeping that temperature increase to below 1.5 degrees, or reducing carbon dioxide in the atmosphere from the current 387 parts per million to 350 ppm). Then there are negotiators in the plenary session who wrangle over whether there ought to be one or two negotiating tracks. (I explain here.) China, India, Brazil, and developing nations emphasize the past: because the United States and other industrialized nations are responsible for most of the greenhouse gases now in the atmosphere, they ought to go first in dramatically cutting emissions. The United States and the others fixate on calculations about the future: because China and other major developing nations will be responsible for almost all of the future growth in emissions, they ought to make internationally binding commitments to lower their greenhouse gas pollution.

And there’s more. Developing countries are demanding hundreds of billions of dollars annually from the West for programs that will help them contend with climate change over the next decades. The United States, Europe, and Japan are talking about tens of billions for the next three years. Poorer nations describe this money as “climate debt” or “reparations,” arguing that it’s payback from the United States and other Western nations that got rich by befouling the atmosphere. The United States dismisses this idea but acknowledges it has a “historic responsibility.” Yet on the 1.5-or-2-degrees face-off, the developing nations are split. China, India, and other big emerging economies favor the larger number—so there’s less pressure on them to reduce emissions.

All these differences are real, severely so. “If you focus on just 2 degrees, it is not sufficient to secure the survival of the African people,” said Djemouai Kamel, Algeria’s lead climate negotiator. “We must negotiate on the basis of what the science says to us.” And that science is clear. The IPCC in 2007 concluded that up to 1.8 billion Africans will be threatened by water scarcity if there is a 3-degree temperature climb, and such an increase would probably occur in Africa with an overall 2-degree global boost. With an uptick of 1 degree, the IPCC said, 75 to 250 million Africans will face water stress. “Africa is dying, while we are busy with the numbers,” exclaimed Victor Fodeke, the Nigerian environment minister at a press conference. Asked about the small island nations’ demand for a 1.5-degree limit, Swedish negotiator Anders Turesson remarked, “I don’t see this as unrealistic. They risk being submerged…The target should be below 2 degrees.”

Lumumba Stanislaus Di-Aping, the Sudanese United Nations ambassador who chairs the Group of 77, a bloc of the world’s poorer nations, has been particularly fiery in his rhetoric on this point. Talking to reporters, he exclaimed:

Is Todd Stern saying that destroying Africa…is acceptable to him? Is he telling us that the world will put Africa into a furnace? Nearly a billion people into a furnace because it’s too late in the day to change the path…He is basically condemning Africa to death…Have you read anything about condemning 6 million in Europe to furnaces?

Throughout the conference, Di-Aping’s exhortations have irritated Western negotiators. He has called for setting up an international fund within five or six years that would disperse $400 billion annually: “It was possible to issue $250 billion for the financial crisis; it should be possible to issue more for the climate change crisis.” After he commented that the $10 billion in international climate change funds suggested by the United States “is not enough to buy the coffins to bury us,” European Union chief negotiator Artur Runge-Metzger quipped, “How would he know? He lives in New York.”

Grandstanding aside, the financial issue—how much, how fast, who gets the money, who distributes it—reflects that divide in realities. US and European officials refer to billions for a near-term start-up and voice concerns about who will determine how the money will be spent. Developing nations are looking for the industrialized nations to render a long-term commitment of a much higher magnitude, as an acknowledgment of their basic responsibility toward poorer nations. “This is not a donation, not an act of charity,” Chinese Vice Foreign Minister He Yafei asserted. At a press conference, he repeatedly referred to China and other developing nations as “victims” of the industrialized nations’ climate change pollution, pointing out that China, with 150 million people in poverty, cannot sacrifice in the same manner as wealthier nations: “In developed countries, it is very common to have air-conditioned gyms…In developing countries, people use coal to cook their meals.” He called for the industrialized countries to devote 0.5 to 1 percent of their GDP to an international climate change program, adding, “I doubt the sincerity of developed countries in their commitment.” In diplomatic terms, those were fighting words.

So far, the wealthy countries are staying clear of in-the-long-run numbers. But nongovernmental organizations see this as crucial. Speaking at a press conference held by NGOs, Liz Gallagher, the climate policy director of CAFOD, the overseas relief arm of the Catholic Church of England, noted that the industrialized nations have to offer big amounts: “That is really, really the key to unlocking all the stalemates.” She contends that the goal should be $195 billion a year, insisting this is not so much when compared to the $35 billion a year spent on bottled water.

During its first week, Copenhagen was a dizzying affair that yielded little progress. As ministers of state began arriving this past weekend, the negotiations over the most significant items were lagging, leaving the higher-ups much to resolve. When Yvo de Boer, the conference’s executive secretary, was asked on Friday if the summit has become a four-corner fight between the United States, Europe, developing nations, and emerging nations, he replied, “We have seen people at much more than four corners.” And that’s just within the official confines of the gathering. Throw in the unofficial outsiders who have flocked to Copenhagen, and it’s a scrum.

But there may be a basic divide—between the fundamentalists and the balancers. The first band is concerned foremost with achieving a remedy that prevents any further harm from climate change—period. The second group seeks a response balanced with other concerns (in China’s case, economic development; in the United States’ case, domestic political constraints that seemingly limit President Barack Obama’s actions). After an IPCC presentation, Rajendra Pachauri, the group’s head, obliquely addressed this gap. He noted that a 2-degree temperature boost would prompt a rise in sea levels that would be “life threatening” for parts of the world. But, he added, it is up to the negotiators to decide how to respond to that scientific information. “The science can project if some small island states are going underwater,” he said. “Whether that’s accepted is a values judgment.” Pachauri is right. At Copenhagen, ultimately, it’s all about values.