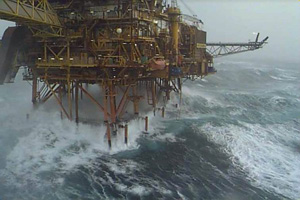 At his long-awaited press conference on the Gulf oil disaster last month, President Obama announced a moratorium on new oil drilling and exploration for six months. “We can’t do this stuff if we don’t have confidence that we can prevent crises like this from happening again,” he declared. But while existing rigs may be out of commission for the near future, the administration hasn’t exactly put the brakes on new oil and gas drilling ventures. In recent weeks, the government has quietly approved the sale of more than 400 new leases for vast swaths of the Gulf of Mexico. And these contracts—which mark the first step in the drilling process—were subjected to the same slapdash environmental oversight that failed to prevent the BP catastrophe.

The region was included in a plan created by the Bush administration’s Department of the Interior to lease new areas of the Gulf to the oil and gas industries. But it was Obama’s Interior secretary, Ken Salazar, who gave the go-ahead for the sale of Lease 213—6,800 tracts covering 36 million acres off the coasts of Louisiana, Mississippi, and Alabama in November 2009. The sale—which was held on March 17 this year in the New Orleans Superdome—attracted $1.3 billion in bids. Since then, the Department of the Interior’s Minerals Management Service (MMS) has approved the sale of 448 of those tracts, 198 of them in deepwater, which is defined as more than 656 feet below the sea. BP is the proud new leaser of 13 of those tracts.

The lease sale is the first step in the oil drilling process. Companies must first obtain the right to drill the tracts before they can devise exploration plans, which must be approved by MMS.

And that’s where the problem lies. MMS has been notorious for rubber-stamping the oil industry’s plans. The lease for the well that’s spewing oil into the Gulf, the Macondo, was sold in March 2008. The exploration plan for that well was granted a “categorical exclusion” from the requirements of the National Environmental Policy Act (NEPA) in April 2009, paving the way for drilling to begin.

Earlier, in April 2007, MMS completed a 924-page Multisale Environmental Impact Statement for the Gulf region—covering both the site of the Deepwater disaster and these new tracts leased by the government. The statement projects that an “estimated 2-3 blowouts could occur” in the central Gulf in an average year, but significantly downplays the potential impact of a large spill. Most blowouts have a “short duration, and half of blowouts lasted less than half a day,” the statement says, projecting that a large spill would only “acutely threaten recreational beaches for up to 30 days.” The document also states that a large spill would only have a 23 to 25 percent risk of harming the waters of western Louisiana.

That sunny evaluation served as the basis for an October 2009 environmental assessment specifically covering Lease 213. This study found that “no new significant impacts were identified” for the region beyond those named in the initial report. Therefore, no additional investigation or precautions would be necessary. This document also argued that the impact of oil development on the Gulf would be negligible. “The effect of proposed Lease Sale 213-related oil spills on fish resources and commercial fishing is expected to cause less than a 1 percent decrease in standing stocks of any population, commercial fishing efforts, landings, or value of those landings, ” the document said, concluding, “[T]here would be very little impact on commercial fishing.”

“That environmental assessment is virtually worthless. It does not at all address the likelihood or potential impact of what’s currently occurring in the Gulf, which is a major blowout,” says Mike Senatore, vice president for Conservation Law at Defenders of Wildlife. “They’re essentially acting as if nothing has changed and we’re going to keep moving ahead with business as usual.”

The problem, adds Senatore, is that MMS’ cursory environmental analysis of the lease sale is as good as it gets. Once a lease sale has been approved, there’s rarely any additional environmental scrutiny of drilling proposals. Most exploration plans are granted a categorical exclusion from a more detailed review under NEPA.

Defenders of Wildlife and the Southern Environmental Law Center (SELC) have sued MMS in the federal district court in Mobile, Alabama, to challenge the sale of these leases, arguing that the environmental assessment was inadequate and should be given a second look in light of the Gulf disaster. The Center for Biological Diversity has also filed suit against the Department of Interior for granting NEPA waivers, and has signaled that it intends to sue over lax enforcement of both the Marine Mammals Protection Act and Endangered Species Act in the Gulf.

The biggest concern, argue SELC and Defenders of Wildlife, is that once these leases are sold, it’s unlikely the government will reverse course on drilling. Once the oil companies pay for the rights, the government can’t cancel the contract unless it pays back the lessee either the fair market value of that lease or the amount spent to obtain the bid, plus costs and interest.

“It becomes a financial issue for the government to cancel a lease once it’s issued,” says Derb Carter, senior attorney and director of the Carolinas office of the Southern Environmental Law Center. “They should have immediately halted the leasing and gone back and evaluated the potential environmental impact of drilling in light of the BP disaster.”

MMS has come under heavy criticism in past weeks for continuing to approve exploration plans and other incidental steps that  help keep the drilling process moving forward, even if the administration has called a halt to new drilling and existing exploratory operations. The agency’s defense in numerous congressional hearings on the Gulf disaster has been that its hands are tied by law. Under the Outer Continental Shelf Lands Act, the agency only has 30 days to complete an environmental review and act on an application to permit drilling—meaning it doesn’t have time to complete a full NEPA review. But when it comes to doing due diligence on lease sales, this argument doesn’t wash. The agency has 90 days to consider bids, and can extend that period by “15 working days or longer” if necessary. The government is also under no obligation to accept a bid.

Nancy Sutley, chair of the Council on Environmental Quality (CEQ), admitted at a May 18 Senate hearing that categorical exclusions under NEPA have become “widely used throughout the government” in recent years. The exclusions are “intended to be used in areas where we have extensive experience” and where development is “known to have little environmental effect,” she said. In February, CEQ acknowledged the need for better enforcement of NEPA with new guidelines, and shortly after the Gulf disaster began announced a review of NEPA enforcement at MMS in particular. The Department of Interior has also asked Congress to extend the review period for drilling permits to 90 days to allow more time for environmental analysis. (MMS did not respond to requests for comment on the new leases.)

But if MMS is serious about taking a more cautious approach to drilling, it could simply hold off on these new leases until tougher oversight procedures are in place. “They are effectively putting the taxpayer on the hook if and when they get around to revisiting their environmental assessment,” says Senatore. “Now is the time to shut the process down, go back, fix the environmental analysis before you get into this cycle of losing your ability to say no.”