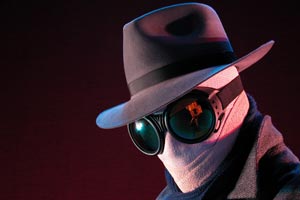 Waves thick with crude, tar-slicked beaches, and oil-soddened wildlife—it’s all visible evidence of the havoc that oil has wreaked in the Gulf. But marine scientists now fear that colorless, odorless natural gas that escaped from the ruptured well is also destroying the delicate ocean ecosystems—and BP might never be held accountable for the damage this “invisible villain” causes.

Investigations have so far indicated that the rig explosion was caused by natural gas—likely triggered when a highly pressurized surge of gas shot up through the well and ignited when it came into contact with machinery. But in the aftermath, the role all this gas—some 40 percent of what is escaping from the well—will play in the destruction of marine life has seldom been discussed.

At the point of exit from the well, the gas and oil are combined, but in the water they quickly separate. While BP has asserted that most of the gas surfaces and dissipates into the atmosphere, the research of John Kessler, a professor of earth system science at Texas A&M University, shows otherwise. Kessler has found that at the surface, levels of methane—the primary component of the natural gas—have remained normal, but they’ve skyrocketed at lower depths, indicating that most of the gas is still in the water.

In the 10-mile radius around the well site, research teams have measured methane levels in the water averaging 100,000 times normal levels. Kessler says levels are up to a million times normal in parts of the Gulf immediately surrounding the spill site. “This is the highest concentration I’ve ever seen in ocean waters, easily,” says Kessler. He believes it could take years—possibly decades—for the gas levels in the ecosystem to return to normal.

In the meantime, the leaked gas could dramatically change the chemistry of the Gulf. When natural gas is present, certain bacteria that digest it flourish out of control and can quickly deplete the oxygen in the surrounding waters, creating “dead zones” where little can exist. Because of blooms powered by agricultural runoff, dead zones already plague the Gulf—a 6,000-square-mile one forms every year. But this June, Kessler and his National Science Foundation-funded research team found oxygen levels as much as a 30 percent lower than normal, and scientists are now predicting that this year’s dead zone could grow to roughly the size of New Jersey. And even if BP’s assurances that the gas was escaping into the atmosphere were true, that’s not a lot of consolation, as methane is a toxic greenhouse gas.

Since outside experts have been unable to ascertain how much oil and natural gas spewed into the Gulf, it’s also unclear how much BP will have to fork over to pay for its mess. The Department of the Interior announced last week that it expects BP to pay royalties on both the oil and the gas it has spilled. Royalties are currently set at 18.75 percent of the going price of a barrel of oil and 12.5 percent per unit of natural gas.

But fines are another story. For Clean Water Act violations alone, BP faces fines ranging from $1,000 per barrel of oil spilled to $4,300 per barrel if the company is found to be grossly negligent in causing the disaster. But it faces no such fines for all that gas. While the Oil Pollution Act, the 1990 law enacted shortly after the Exxon Valdez, amended the Clean Water Act to levy fines for oil spills, it doesn’t mention natural gas. The laws were designed to deal with a spill like Valdez, where a finite amount of oil dumped from a tanker. They were not designed to deal with a cataclysmic gusher of oil and gas a mile below the ocean.

Ian MacDonald, a professor of oceanography at Florida State University, believes that government fines for a major disaster should include penalties for the released gas. “The gas is this unseen component of all this, acknowledged but not quantified in the total flow estimates,” said MacDonald. “We think that’s scientifically invalid because the methane released at the sea floor enters into the marine environment. A release is a release.”

But unless Congress changes the law, natural gas will go on being the “invisible villain,” as Jackie Savitz, director of pollution campaigns at the oceans advocacy group Oceana, put it. “As if the oil wasn’t bad enough.”