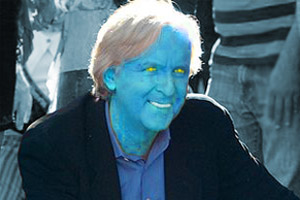 You don’t have to look hard to find environmental themes in director James Cameron’s films: Nuclear war was an obvious subplot in the Terminator series, as the heroes fought off time-traveling cyborg assassins hell-bent on ensuring their own post-apocalyptic reign. In his most recent film, 2009’s Avatar, humans exploit the mineral resources of a wonderland filled with nature-worshiping natives.

And in the year since Avatar‘s release, Cameron has become a much more vociferous environmental activist. He’s spoken out against a huge dam complex on Brazil’s Xingu River, in the heart of the Amazon rainforest. At the peak of the Gulf oil spill, Cameron huddled with scientists and government officials to drum up a solution to the gushing well—and called BP executives “morons” for ignoring his advice. Last week, he visited Alberta’s tar sands. When I spoke with Cameron, he dished about his trip to Alberta, his high school directorial debut, and Avatar‘s careful balance of entertainment and activism.

Mother Jones: Was there a general takeaway from your trip to the tar sands?

James Cameron: This thing is really big. It’s not only big just in terms of physical extent. It’s big in terms of its ramifications. There’s an enormous potential to create some change here that can be beneficial, that will really move the needle downstream on a global basis. There’s also an enormous potential for this to become an environmental disaster that’s unprecedented.

MJ: So do you have recommendations coming away from the trip? Does the tar sands just need to be better regulated, or should extraction there be stopped outright?

JC: I don’t think banning it outright is practical. I don’t think anybody’s going to go for that. But I’m not even sure that that’s the right answer, because energy security is an issue for North America, and right now any war that we’re in in the Middle East, we’re funding both sides of it by buying our oil there. So the geopolitics of it suggest that having an onshore North American secure supply that is bigger or as big as Saudi Arabia is an important driver. Set aside the greed aspect of it, and there are political aspects of this that are huge.

I think it is realistic to say that there are health hazards, there are environmental hazards that need to be understood, and that this thing is racing forward too fast, that the pace and the scale are too great, and that we need to put the breaks on. We need to understand it better, and we need to have aggressive funding of independent science. We can’t afford to screw this up, because this is going to have an impact on a global scale.

MJ: Many people assume that you’ve just now become interested in the environment since making Avatar, but this has really been a long-standing theme in your work, no?

JC: Avatar for me was a conscious decision based on—really since my teenage years—worrying about this. I wrote a play in high school called The Extinction Syndrome, and it was about us basically making ourselves extinct through pollution and warfare. It was pretty sophomoric, but at heart I haven’t changed that much since then, and I haven’t seen a reason to change. It just seems to be getting worse and worse.

MJ: Nuclear war was obviously part of the storyline in Terminator but the film was much less explicitly environmental than Avatar. Is there any worry that being more direct in conveying an environmental message alienates audiences at all?

JC: If it hadn’t alienated some people, maybe it would have made it to $3 billion. But I’ll settle for being a billion dollars beyond the next-highest box office contender—you know, that sobby movie about the boat thing.

MJ: True, but do you think there’s a greater value to keeping the environmental messages in your films more subtle? Does that allow you to reach a wider audience?

JC: Well, I think there’s a big gulf between Avatar and An Inconvenient Truth. My goal with Avatar was to create an integrated experience—not to candy-coat it so people would be attracted by the action and then get this dollop of being lectured to. It wasn’t that at all. It was to create an integrated experience where they really felt emotionally very strongly—and even, dare I say, spiritually—what the message of the movie was. It’s about the need for life in balance with nature.