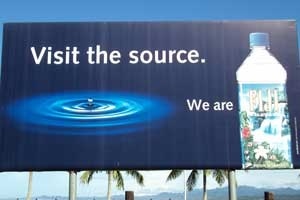 Fiji Water announced today that it will close its operations in Fiji in response to a water extraction tax hike proposed by the Fijian government, to take effect in 2011. The abrupt shutdown comes just three days after the government announced the 2011 budget, which proposes increasing Fiji Water’s “extraction tax” to 15 cents a liter up from one-third of a cent. A week ago, Fiji Water Director of External Affairs David Roth was deported from Fiji. (The country’s then acting Prime Minister and simultaneously Minister of Defense, National Security and Immigration, Ratu Ganilau, resigned in protest of Roth’s deportation.)

Prime Minister Voreqe Bainimarama said that Roth had been interfering in the domestic affairs and governance of Fiji, though he would not explain the nature of that interference. “It is unfortunate that David Roth saw it fit to engage in activities outside of his work permit conditions,” Bainimarama said. The government later stressed that the issue was between the government and Roth, not Fiji Water.

In a statement released today from California, Fiji Water President John Cochran said that the company was hoping to work with the government to resolve the tax dispute, but added that “the country is increasingly unstable, and is becoming a very risky place in which to invest.” Cochran also said that the junta’s move was “taking our business” and that the tax hike “sends a clear and unmistakeable message to businesses operating in Fiji or looking to invest there.” Fiji Water also called the tax “discriminatory” since it only applies to companies bottling more than 3.5 million liters per month—that is, only Fiji Water.

Cochran noted that the company has been paying “millions of dollars in duties and income tax.” Fiji Water has, however, benefited from tax-exempt status on its corporate income, granted when the company was founded in 1995 and extended ever since. Court documents submitted by the company in 2008 showed that Fiji Water was owned by an entity in Luxembourg, a tax haven, and recent Swiss financial records also show Fiji Water owners Stewart and Lynda Resnick transferring Fiji Water assets to companies in Switzerland. (The company has also trademarked the word “FIJI” in the Cayman Islands.)

In the wake of the closure announcement, Bainimarama issued a stinging statement—his first public attack on the company—saying that “as usual Fiji Water has adopted tactics that demonstrate that Fiji Water does not care about Fiji or Fijians.”

Fiji Water went through similar turmoil in 2008 when the government tried to impose a 20 cent tax hike—Fiji Water called that tax “draconian” and shut down its operation, but was only out of service for a few days before Fiji’s cabinet yanked that idea. But Bainimarama’s verbal lashing of the company indicates that the government may not back down so quickly this time.

So will celebrities and conference-goers go parched? The Resnicks have one potential backup hydration source in New Zealand, where they own the Spring Fresh brand of bottled water. Spring Fresh’s website now uses many of the same selling points as Fiji Water, including a claim that the company’s operations are “carbon negative”.

While Fiji Water fans around the world have already begun tweeting about buying up stocks of Fiji Water (“MY LIFE IS OVER OMG OMG” was one of last night’s calmer tweets), the company is hopeful its supply won’t be drying up just yet. “Fiji Water remains willing to work through this issue with the Fiji government, as it would be our preference to keep operating in Fiji,” read the statement announcing the closure.

And if not, the Fiji government blusters, it’s not as if no one else would care to sell its water: Bainimarama said if no resolution is forthcoming, he “will call for international tenders from credible and reputable private sector companies to extract this valuable resource.”