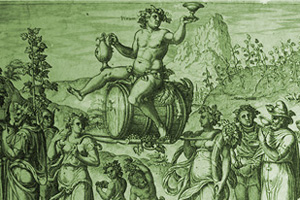 Murder in Detroit, overworked immigration judges, bruisers-for-hire on Indian reservations: If you’ve been reading Mother Jones lately, you’re probably ready for a stiff drink. Not so fast! In terms of greenhouse-gas emissions, US booze manufacturers release the annual equivalent of 1.9 million households. How’s that for a buzzkill? The good news is that you have choices. Here are a few tips for drowning your sorrows sustainably.

WINE: Fruity bouquet? Tastes like pencil shavings? Environmentally speaking, none of that matters: According to a 2007 study (PDF) commissioned by the American Association of Wine Economists, the majority of wine’s carbon footprint comes from shipping. You can minimize your wine miles by using the handy map below. In short, New Yorkers should buy French, while Iowans are better off drinking California wines. If you’re concerned about water use, go for bubbly wines made with early-harvested grapes. TRY: French Rabbit wines. They come in recyclable Tetra Paks, which reduce packaging weight by 90 percent over bottles. For reasonably priced organic wines, try Frey Vineyards—if the map allows.

If you live east of this line, European wines are better for your carbon footprint. Western oenophiles? Go green by buying Napa.

BEER: In 2008, New Belgium Brewing Company commissioned an environmental analysis (PDF) of its Fat Tire Amber Ale and found that refrigeration accounted for almost one-third of its overall greenhouse-gas emissions. Glass production was second, contributing 22 percent. Though aluminum production is an environmental disaster, cans beat bottles handily on the carbon front: Pablo Päster, a blogger and sustainability consultant, calculates that shipping cans rather than bottles results in 30 percent fewer emissions. And cans are recycled at significantly higher rates. Good news for your inner frat boy: Kegs are the most efficient vessels of all. TRY: New Belgium. The Colorado-based company brews in superefficient kettles and is entirely powered by renewables.

DISTILLED SPIRITS: As we learned in college, liquor is quicker than wine or beer. But producing it uses more energy, ounce for ounce, and nearly all the water that goes into the still emerges as waste. Here’s how selected spirits stack up.

Whiskey: Single malt Scotch is made from only one grain source, while most American whiskeys are made from mixtures of rye, corn, wheat, or barley. So which are greener? Most single malts are produced by boutique outfits using old-fashioned energy-hogging pot stills, as opposed to the more efficient column-style stills employed by major distillers. And while American bourbons are aged in virgin-oak barrels that are used only once, most of those barrels end up being reused by other liquor makers. TRY: Maker’s Mark. The bourbon maker buys local grain and turns its waste into energy. Most of the company’s land is a nature preserve.

Vodka and gin: Although some vodkas are still made from potatoes, most now come from a mix of grains. Ditto for gin. In terms of distillation, vodka requires more energy and water than most spirits. That’s because it’s distilled down to 95 percent ethanol—some ethanol plants even make vodka on the side—then diluted back to 40 percent. Gins are often made the same way. TRY: Square One vodka, which is organic and purchases one-quarter of its electricity from a local wind farm through renewable energy credits. TRU2 gin uses lightweight bottles and recyclable corks, and plants a tree for each bottle it sells.

Rum: The mojito enabler is made from molasses or cane juice, and its fibrous leftovers can throw off the microorganism balance in waterways. In 2001, the EPA sued Bacardi for illegally dumping 3,000 gallons of this goop into a river near its Puerto Rico plant. (Many major distillers now treat their water.) Sugarcane is also a notoriously destructive crop, producing massive amounts of wastewater and greenhouse gases. TRY: DonQ rum. The Puerto Rico-based distiller turns its waste into compost and irrigation water, and uses excess steam from its treatment plant to help power the still.

Tequila: Tequila’s waste problem is as bad as rum’s. For every liter of tequila, you get about 11 pounds of pulp and 10 liters of vinazas, or acidic waste—which ends up befouling soil and water in Mexico’s Jalisco state, where most tequila comes from. Blue agave farmers, meanwhile, have used more and more pesticides since their crops were chewed up by insects during the 1990s. TRY: Casa Noble or 4 Copas, the first tequilas to be certified organic.