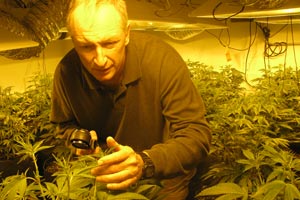 In 2004, California organic farm inspector Chris Van Hook submitted an unusual request to the US Department of Agriculture: He wanted permission to certify a medical marijuana farm as organic. He’d already inspected three pot farms, he says, before word came back that weed couldn’t be organic because it wasn’t a federally recognized crop.

So Van Hook founded Clean Green, a certification program for medical marijuana farmers that’s nearly identical to the USDA’s organics program—except that it can’t legally use the term “organic.” Since launching in 2004, Clean Green has certified 80 medical marijuana growers who last year produced 8,000 pounds of cannabis valued at as much as $33 million. It’s the only inspection service aimed at pot smokers who want their ganja to be farmed as safely and ethically as their organic salad greens.

In practice, medical marijuana is typically greener than pot from your curbside drug dealer, which is often sourced through Mexican cartels or illegal grows in national forests. But the distinction pretty much stops there. Grown under the radar of state and federal agricultural authorities, even “medical” cannabis can be covered in toxic mold, raised in rooms filled with shedding pit bulls, or coated in commercial-grade synthetic fertilizers and insecticides such as phosphate and Diazinon, which can be especially toxic if improperly applied. “Under our program a huge advantage is the patient can be assured that their cannabis is being grown in a legally compliant manner,” says Van Hook. Well, at least “legally compliant” enough for any eco-conscious stoner. 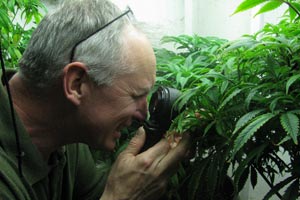 On a recent Saturday afternoon, I accompanied Van Hook, a balding, soft-spoken, 54-year-old, on an inspection of an indoor cannabis growing operation in a house deep in a Northern California redwood forest. He’d asked that I not reveal the name and location of the grower, a fit, clean-cut young father whose day job involves corporate leadership training. It had been about a year since Van Hook had certified his grow-op; just as USDA organic standards require, it was now up for its annual re-inspection.

“I just want to do something I believe in,” explained the grower, who I’ll call Jack, as we stood outside his modest bungalow, “and do it as ethically and environmentally consciously as possible.”

Though medical marijuana is legal in 15 states, most of them don’t inspect pot farms for compliance with agricultural laws. Which where Van Hook’s status as an accredited “apples-to-zucchini” USDA-certified organic farm inspector comes in: He’s denied some pot growers Clean Green certification for infractions such a using composted human feces to fertilize plants, growing plants near livestock pens that coat buds in manure dust, or setting off a bug bomb in a grow room shortly before harvesting.

In the front of a detached garage, Jack deactivated a security alarm system and welcomed us inside. Van Hook was already scribbling notes; he doesn’t certify grow-ops in houses with children, who can ingest buds or be killed in electrical fires, unless the plants are in “detached, locked facilities.” Jack unlocked another door leading to a sealed-off grow room that filled the garage nearly wall-to-wall. The pungent smell of 40 thriving marijuana plants (most of them a variety known as Sour Diesel) mixed with the earthy aroma of a bubbling brew of compost tea, a mix of nutrients and beneficial bacteria that is used as a fertilizer and disease suppressant.

Along a wall full of organic gardening products—a molasses-and-yucca-based soil supplement, an oil from Indian neem trees to control pests—Van Hook spotted an unfamiliar-looking bottle of “natural” fertilizer from a company called Humboldt Nutrients. Like many products marketed to pot growers, its psychedelic label looked like the cover of a Grateful Dead album. “Forget about the Buddhas and the spaceships; I look at the ingredients,” Van Hook said as he picked up the bottle. A USDA-certified input reviewer on Van’ Hook’s seven-person staff would later vet its contents.

A lack of approved products isn’t the only obstacle to growing organic ganja. Compost teas and guano-based fertilizers contain too much sediment to pass through the tubes used in soil-free hydroponics systems, so indoor growers like Jack rely instead on standard potting soil and watering by hand. Powerful grow lamps suck down large amounts of electricity—a criticism often raised by certified outdoor farmers, whose weed fetches about 50 percent less on the dispensary market because it isn’t as powerful or visually striking as indoor buds. Though Van Hook doesn’t penalize people who use lamps, he refuses to certify indoor grow-ops powered by dirty diesel generators, which are common in California’s remote northern counties.

As Van Hook continued his inspection, Jack flipped a switch and triggered a white nova of grow lamps. Van Hook crouched beneath them with a microscope in search of signs of pesticide residue and spider mites on marijuana leaves; a few insects are actually desirable as signs of pesticide-free growing. He went on to check that Jack complied with local pot-cultivation laws, electrical codes, and agricultural sanitation standards. He’s applied a similar checklist to the nine medical marijuana dispensaries that are certified as “processor/handlers,” giving them the right to package Clean Green pot—just as the USDA authorizes Whole Foods to package organic granola.

According to Van Hook, Clean Green marijuana doesn’t necessarily sell for more than uncertified medical pot; the trick is knowing where to find it. About 10 California dispensaries offer Clean Green-approved product, including Harborside Health Center in Oakland and Herbalcure Collective in Los Angeles. Van Hook, who charges an average of $1,800 per certification, pitches his services to farmers and dispensary owners primarily as a tool for product differentiation and marketing.

Despite those benefits, many pot growers and sellers are nervous about letting a third-party inspector take notes that could be used against them by federal law enforcement. Which is why the inside of Van Hook’s van displays a framed copy of his law degree from Concord Law Law School; being a lawyer enables him to keep his notes confidential under attorney-client privilege.

The final stop on Van Hook’s inspection was in a shed where Jack unlocked a metal chest beneath a futon to reveal several plastic “turkey bags” brimming with buds. Some dispensaries commission independent testing on their purchases to check for harmful chemical residues. Van Hook’s field tests are more basic. He pulled out a microscope and searched for signs of hair or mold. “They are beautiful buds; they are immaculate,” he proclaimed, marveling at their gemlike THC crystals. Jack smiled. “You are a medical cannabis patient, aren’t you, Chris? Why don’t you try a little bit?”