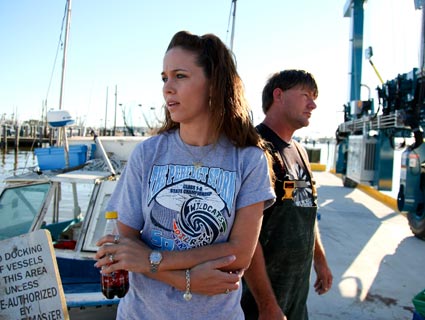 Photo of Kindra Arnesen by Lisa Whiteman, courtesy of NRDC

When the Deepwater Horizon exploded on April 20 last year and unleashed a torrent of oil on the Gulf of Mexico, Kindra Arnesen was putting the finishing touches on the house in Buras, Louisiana, that she was still rebuilding from Hurricane Katrina. Since the storm, she and her family—husband David, a commercial fisherman, and a nine-year-old daughter and six-year-old son—had been living in a three-bedroom trailer behind her restaurant, the Barbeque House. They were all looking forward to moving home again.

She was also getting ready to reopen the restaurant for the season on May 1, 2010, but the 4.9 million barrels of oil that the Deepwater Horizon unleashed on the Gulf put that plan on hold amid fears of contaminated seafood. “It has been a freaking nightmare,” says Arnesen, 33. In the weeks after the spill, she asked a friend to evacuate her children because she was concerned about their exposure to the oil and dispersants—a tough choice, given that the family had been split up during the hurricane and wasn’t ready to deal with separation all over again. She later joined them, moving the family around several times before returning to South Plaquemines Parish for the start of school in early August. In the months since the BP disaster, Arenesen has dealt with health problems she believes were caused by exposure to the oil and chemicals, a claims process that has strung her family along for months, and a government that has forgotten all the other people who rely on the Gulf in the rush to resume drilling offshore.

“We’re not used to having to come up here and ask all these agencies in DC to do what our tax dollars pay them to do,” Arnesen told Mother Jones last week after an event on Capitol Hill. “I own two homes, a restaurant, and four boats. I’ve put that back together in the last five years. I don’t owe no money on anything. We work really, really hard for what we do and what we get, and then it is almost like we’re painted by our own politicians through their actions, or lack thereof, as people that don’t need to exist, like we are expendable.”

Reporter Kate Sheppard talked to Arnesen last week ahead of the first anniversary of the Gulf oil disaster.

Mother Jones: How has the claims process been for you? Have you received any compensation?

MJ: So, are you going to do the long-term payment they’re offering?

MJ: Would you say the oil spill has made you an activist?

MJ: So what is the message you’re bringing to Washington?

KA: Shit or get off the pot. Basically, you know, step up to the plate and do your job and actually ensure our safety for the future. It is a year later and they have done nothing.

KA: The biggest problem with the situation is with the PR campaign that has been going on for the last year. The moratorium supposedly cost them like 25,00 to 30,000 jobs; that’s the oil field’s frame on it. If they actually were truthful with their employees, then they would know that any time that you create proper production and put in safety standards and all of this, that it creates jobs. It doesn’t take them away. So of course the oil field guys are like, “You guys are killing our jobs”—you know, “What are you doing?” But in fact we are not. We are trying to make sure that they are safe.

MJ: It’s not that you’re opposed to the oil industry, you’re saying—you just want them to be safe.

KA: I’m not opposed to deepwater drilling. I am opposed to ignorance and negligence.