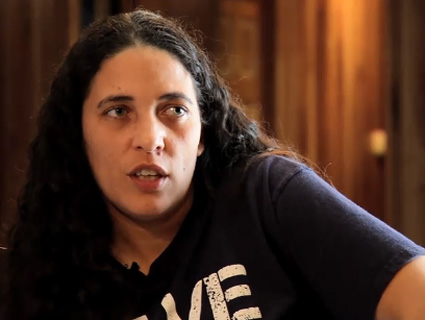 Five years ago, Cherri Foytlin’s family moved from Oklahoma to Louisiana, staking out a new life in her husband’s hometown of Rayne. A 38-year-old mother of six, the wife of a deepwater oil worker, and a reporter at the local paper, Foytlin was just finalizing the purchase of a new home when her husband’s rig was idled for the offshore drilling moratorium. They had just signed off on the house when her husband lost his job on the rig, a devastating blow.

Not long after the spill, she took a trip out on the water with a local fisherman. They came upon a pelican in the water completely covered in oil. “We pulled it up into the boat and we were going to try and get it back to Fort Jackson, the cleanup area, but it started having convulsions and it died—right there between us,” says Foytlin. “I felt really guilty for not just this pelican, but the ecosystem. And not because my husband is an oil worker, but mainly because of what I know we waste in this country and what we take for granted.”

Since then, she’s spent much of her time organizing the group she founded, Gulf Change, and taking the cause from the Gulf to the rest of the country. Her march from New Orleans to DC began on March 13, and this week she planned meetings with administration officials—and a protest at BP’s Washington office. She spoke to Mother Jones between meetings.

Mother Jones: How did you end up in Louisiana?

Cherri Foytlin: My husband’s from Louisiana. He came down for his father’s funeral and his brother told him, “Hey, I know you guys are struggling and you want to make some money. The best way to do that is in the oil industry.” So he went to work in the oil industry, and we were making good money. We were making $6,000 a month, taking care of our kids. We had just bought a nice house.

The moratorium hit three days before we signed off on the house, and my husband lost his job. He’s been working in the shop [of an oil field service company] for $400 a week since then. At that point we were devastated, because we’d basically put everything we had into the house.

MJ: How do you balance the messages about taking care of oil workers and the environment?

CF: I would love for my husband to be making solar panels, but all the solar panels are being made in China. One of the things I’m totally advocating is bringing clean energy jobs here, and then providing subsidies so our oil workers get those jobs first.

MJ: Was that a hard position to take? Did you get backlash from people who were on either side?

CF: If it’s been any side, it’s been really hardcore environmentalists who say, “I don’t care if it’s hurting your family, no oil.” And I say, you’re right, but we’ve got to transition it. You’re injuring people, which is obviously not what you want to do in the first place.

The oil companies are investing billions and trillions of dollars into clean energy. They know that the oil is running out. Since a large part of our Gulf economy is based on oil, it’s super important, in order for us to move onto the next phase, that we have that opportunity first. That’s all I’m advocating—that we get those opportunities first.

MJ: What inspired your walk to DC?

CF: It’s been months now. People aren’t being heard. I’m not being heard. My friends are getting sick, there’s wildlife coming in all the time. It’s a mess down there. It’s so nasty. There’s oil. There’s tar balls. There’s dead animals. I walked a 15-mile area in Long Beach and there was over 200 dead jellyfish, 30 dead birds, 25 to 30 dead fish of all kinds, a dead eel, two dead rats. We have a health care crisis down there—11,000 sick people right now. And it’s going to get worse.

I’ve been looking at Martin Luther King Jr., and I’m studying Gandhi and Mother Teresa. How did they do it? How were they successful in what they did? The first thing was to identify an injustice. There’s no doubt that there’s an injustice in the Gulf of Mexico. The second thing was to self-purify—to find an act of sacrifice—and the third thing is to negotiate. The sacrifice was the walk, the negotiation was here in DC. And then the last thing is action. This is my last peaceful resort in rescuing my people. It’s all I have left. I don’t know what the next thing is, honestly.

KS: When you visit BP this week, what’s the message you’re taking over there?

CF: Clean this shit up. I mean, seriously. They need to do what they said they’re gonna do, do what they’re advertising that they have already done, and come clean up the Gulf. It’s a mess.

The worst thing for me is the human health impact. But also, the SUV-sized tar balls that are breaking up and coming in on a daily basis. If a storm comes in, it washes in. It’s right back up in our beaches, it’s in our marshes. Hell, are they kidding me? They’re not even cleaning that stuff. They’re shooting off cannons to keep the birds away. They’re not cleaning that.

KS: Did you ever consider yourself an activist?

CF: The first time somebody introduced me as an activist, I was like, “What?! That’s insane.” I’m just a mom who just happens to be speaking about this issue. But slowly, I kinda warmed up to the idea. People say activist now and I go, “Yeah. You’re damn straight.” If activist means actively trying to look out for people of the Gulf, sure.