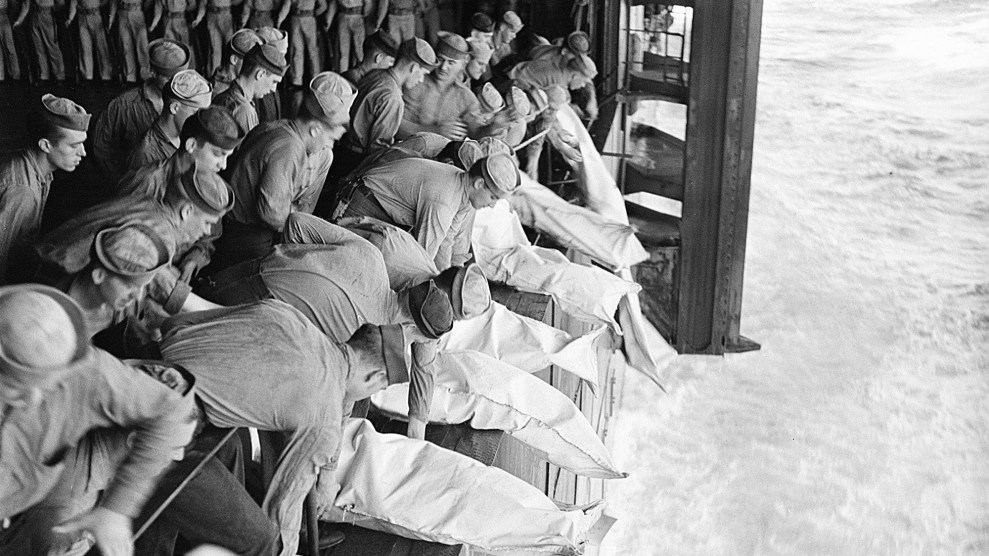 Burial at sea for US sailors, 1944National Archives/Wikimedia Commons

Last Monday, at around 11 in the morning local time, Osama Bin Laden’s body dropped from the aircraft carrier USS Carl Vinson into the Arabian Sea. According to the Pentagon, the hours-old corpse had been washed and placed in a simple white sheet in accordance with Islamic practice. It was then sealed inside a weighted bag and laid on top of a board, which was tilted until “the body slid off into the sea.”

Back on land, the controversy surrounding Bin Laden’s last splash was just beginning. But beneath the waves, nature was taking its course, quietly and methodically turning the world’s most-wanted terrorist into fish food. You could say Osama bin Laden had received the ultimate green burial, courtesy of the United States Navy.

Obviously, the decision to consign Bin Laden to the deep was motivated by expedience rather than eco-friendliness. Seafarers from Odysseus to Ahab have long known that there’s no better way to quickly be rid of a corpse than to toss it overboard. But only recently has this salty custom been rediscovered as a relatively efficient way to be laid to rest with minimal environmental impact.

“I have noticed a great increase in interest in burial at sea,” says Ann Rodney, an environmental protection specialist in the New England office of the Environmental Protection Agency’s ocean and coastal unit, which oversees burials in American waters. The agency doesn’t have hard data on how many Americans choose sea burial, but Rodney suspects the numbers, though small, are growing. “Ten years ago, I might get one or two calls a year about it. Now I get at least one call a week.”

If you’re intent on going into a watery grave, you’ll need to enlist someone like Brad White, a 52-year-old licensed ship captain who has been depositing bodies in the Atlantic since 2005. His company, New England Burials at Sea, based in Scituate Harbor, Massachusetts, does an average of six full-body burials a year and has 25 “pre-need” requests on the books. People who choose to be buried at sea, he says, “typically have a love for the ocean, do not want to be cremated, and prefer ‘ashes to ashes, dust to dust.’ They want to become part of the Earth again via our oceans.”

To help them realize this, White offers burials that he says are not only historically authentic but environmentally sound. “About five or six years ago, someone kept asking me, ‘Can you do a full body?’, and I kept saying no, since I didn’t want to put a casket in the ocean.” He turned to nautical history for an alternative. Traditionally, 18th and 19th century American and British sailors who died at sea where wrapped in a sailcloth shroud with a few cannonballs or leg irons as ballast and then sent overboard. This inspired White to create the Atlantic Sea Burial Shroud, a canvas body bag that comes in seven colors, with your choice of piping or fringe. The shroud zips up, so there’s no need for the traditional final stitch sewn through the nose—a superstitious precaution meant to rouse the comatose. For ballast, White sells custom-made 37.5-pound cannonballs. “Barbell weights work well, too,” he says.

In 2007, a fishing boat off the Massachusetts coast pulled up the remains of a body that had been buried at sea six years earlier.

Besides honoring nautical tradition, White says, a shrouded body has less impact than a corpse inside a coffin—the standard for the Navy, which offers full-body burials for veterans, provided the bodies are embalmed and sealed inside a metal casket with a few holes drilled in it. White prefers not to handle embalmed bodies. “We’re into clean waters and clean oceans,” he says. His system is designed to be as biodegradable as possible. Grommets in the shroud “help the body sink because air comes out. And when a body decomposes, body gases come out. It also allows sea life to go in and do what sea life does. What’s left after everything degrades are the cannonballs, and they make their own reef.”

Plus, White adds, “A Navy ship deploys a body from 10 stories high. We have a gentle deployment system that slides the body into the ocean. It drops maybe six inches to a foot.” (Bin Laden’s body reportedly fell from the hangar deck of the Vinson, which is about 55 feet above the waterline.)

Beyond cost—White’s full-body burial services start at $9,750—there’s little stopping you from visiting Davy Jones’ locker, though the EPA must be notified within 30 days of your final voyage. The agency’s main concern is that once sunk, bodies stay that way. Burials must take place at least three miles offshore and in at least 600 feet of water (1,800 feet in certain areas, such as the Gulf Coast). If you use a casket, the agency recommends drilling at least six three-inch holes in it to “facilitate rapid flooding and venting of air.” It also suggests adding four pounds of additional weight for every pound of body weight, which means the coffin for a 150-pound person would weigh more than 750 pounds. And to make sure coffins don’t pop open when they hit the water, the EPA advises wrapping them in stainless-steel chains, gift-box style.

The only nod to clean-water standards is a requirement that all wreaths or flowers tossed in the water must be “readily decomposable in the marine environment.” The EPA will get on your case if you dump formaldehyde, a known carcinogen, into a stream or lake, but it won’t blink if you put a body filled with formaldehyde-based embalming fluid into the Pacific Ocean. While there is no research on the effects of sunken bodies on ocean ecosystems, Rodney says that logic suggests it’s minimal. She cites the adage “dilution is the solution.” In other words, it’s a big ocean out there.

The rules for burial at sea are more stringent in the United Kingdom. Bodies can’t be embalmed and must be clad in biodegradable material (“commensurate with modesty”); coffins must be made of softwood and may not have plastic, zinc, copper, or lead fittings. Like the EPA, British regulators are preoccupied with preventing bodies from washing up on shore or getting snagged in fishing equipment. They require coffins to be heavily weighted and drilled with 40 to 50 holes. Just in case, each body must have an ID tag locked around its neck.

Though it is rare, bodies do occasionally resurface. Last September, a fisherman came across a floating corpse, naked except for a sock, a few miles off of Florida’s Atlantic coast. A brief homicide investigation revealed it belonged to a North Carolina man who’d been buried at sea a day earlier, wrapped in a plastic tarp. In 2007, a fishing boat off the Massachusetts coast pulled up the remains of a body that had been buried more than six years earlier.

Usually, the ocean does not give up the dead so easily. As he was developing his sea shroud, White did some of his own research into underwater decomposition, running trials with the bodies of various mammals. “We would use store-bought roast turkeys, chickens. Animal Control supplied us with roadkill foxes, possums, raccoons. We used a little bit of everything,” he recalls. He also consulted FBI forensic experts, who informed him that after two days in the water, most bodies are “unrecognizable.” White concluded that a body and a shroud on the sea floor should completely disintegrate within three to six months.

Results may vary depending on a burial spot’s depth, temperature, and its abundance (or lack) of sea life. Generally, the deeper and colder the water, the slower bodies decompose. A 2008 paper in Forensic Sciences described the differing conditions of remains retrieved from two airplane crashes in more than 1,500 feet of water. A victim discovered off of Sicily 34 days after death was still fully dressed; a three-month-old body found off the southern coast of Africa had been “fully skeletonized” by “highly efficient necrophageous lyssianassids” (i.e., flesh-eating shrimp-like creatures).

Another recent study that monitored pig carcasses submerged in approximately 300 feet of water found that hungry sea critters can have rapid and dramatic effects on the dead. Observing a subject known as “Pig 1,” researcher Gail Anderson wrote, “It immediately attracted a number of animals including squat lobsters, Dungeness crabs and spot shrimp. Two days after it was placed on the ocean floor, a large piece of tissue was removed from the rump…the bite mark left behind suggests that the culprit was a six-gill shark.”

Gory, but that’s what it means to sleep with the fishes. Capt. White speculates that Bin Laden’s body has met a similar fate. Considering that the Arabian Sea is warm (right now its average temperature is in the 80s) and teeming with sharks—well, he says, “Go figure.”