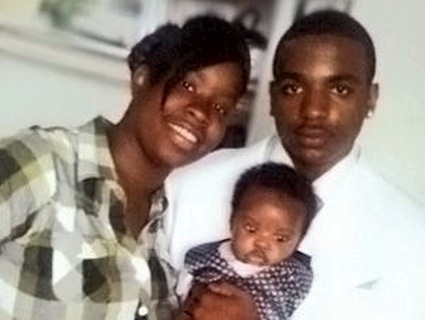 Lawrence Albert “Jahon” Craig Gadlin, a 23-year-old father in Richmond, California, was outside repairing a car with friends on May 13, 2010, when a red minivan drove past and fired dozens of bullets, killing him and two others. I sat in a pew at Gadlin’s memorial service with his classmates from the East Bay Green Job Corps, 15 young women and men I’d been following for a few months. Mourners sang and reached for God as a young man helped Gadlin’s mother take slow, heavy steps to face us all. When Stephanie Guillory could speak, she talked about how her son had wanted to take good care of his new family. “Mom! I got a job,” he’d called to tell her a month before his death. “It’s about time, boy. I’m very proud of you,” she recalled saying, voice quavering. 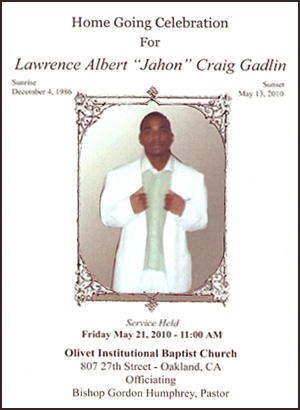 In February of 2009, the Obama administration gave out two-year, stimulus-funded grants of $435 million for hundreds of “green collar” job-training programs across the country. The intent of the grants was to help the people most impacted by the recession—young people from low-income communities and laid-off blue-collar workers—gain skills and jobs in the emerging fields of renewable energy. Last year, the unemployment rate for 16- to 24-year-olds without a high school diploma was 33 percent—the highest since 1947. I decided then to follow the story of one green-collar job-training class in Richmond. Many of the trainees I met were single parents or high school dropouts who couldn’t get jobs, and some had lost faith in their ability to control their future.

As I drove Gadlin’s classmate, 20-year-old Ali Thompson, home from the memorial service, he told me that he’d gone to three funerals in the past two years: one for his brother, one for his uncle, and one for a close friend. Before Thompson’s brother was shot in New Orleans, he’d made Thompson promise not to follow his path. So when Andrew Hanauer of the Workforce Collaborative came to the homeless shelter where Thompson was staying in 2009 to talk about openings with the East Bay Green Job Corps, Thompson jumped at the chance to change his life.

I first met Thompson a year ago, his third week into the green-jobs training program. He was frozen by stage fright and sitting in a classroom with 16 other students, gripping a rolled-up piece of yellow paper in his right hand. His then-classmate Gadlin, dressed in a black hoodie and a black do-rag, walked slowly past him and planted himself firmly in front of the dry-erase board, then read in an even-keeled, confident voice: 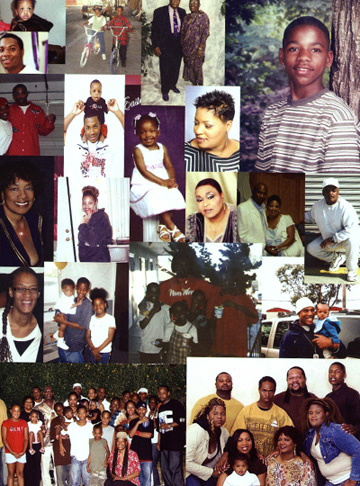 For many students, this was the first time they had spoken formally in public. Teacher Tamera Currington smiled at Gadlin and turned to the class. “I know what you all think. ‘Tamera, why are we reading poems at a green jobs class?’ Well, when I interviewed you for this program, you all had a long list of your weaknesses. When I asked you about your strengths, you had nothing. That’s a problem. You need to know something positive about yourself to propel you forward in life.” She added: Next week all students would be making “green house calls.” “Before you go into people’s homes, you’ll need to learn how to stand straight, look into people’s eyes with a smile, and shake their hand with confidence.”

Reading poems was part of the “Good Presentation Skills” and confidence-building session. It followed two weeks of “Environmental Literacy,” in which Currington explained how climate change impacts neighborhoods like Richmond. A handmade chart on the wall read, “Fall seven times, stand up eight.” Another handwritten sign read, “Global energy consumption by fuel type.” Both were part of the training.

During the lunch break that day, as often happened, students got into a heated discussion about the challenges of living in tough neighborhoods like Richmond. One student had been wanting to get something off his chest to Currington: Someone had spit into his friend’s food, a fight broke out, guns came out of men’s pockets. No one got killed, but both men are now in prison. “In a situation like that, how can I not react? I’d be less of a man if I didn’t,” he challenged.

Gadlin, who had stayed out of the lunch discussion that day, jumped in. “I know, but if I don’t stand up for myself, they’ll keep coming back and taking advantage of my weaknesses,” he said. “Take yourself out of the bad situation,” Currington offered. “But I love where I’m from. I don’t want to move,” he responded.

After three weeks of class, Currington drove Thompson and his classmate Josue Hernandez to get their first, real, on-the-green-job experience. Rising Sun, one of the five nonprofit partners of the East Bay Corps, employs young people over the summer to make green house calls. During these calls, young workers audit energy efficiency in private homes and suggest free or low-cost upgrades.

On this green house call, Thompson rang the doorbell, and Richmond resident Jesse Thomas opened the door. In the next 30 minutes, Thompson and Hernandez rushed through the house from room to room. They measured water pressure, checked for hidden leaks under all sinks and toilets, swapped incandescent lightbulbs with free fluorescent ones, installed free water-saving shower heads and faucets, and peered at the temperature of the fridge. “I’d love to do these house calls full-time,” Thompson told me as we drove back to class.

It’s now been a year since Thompson graduated. He’s not doing green house calls full-time, but he is employed—at a UPS warehouse in Richmond. While at the Corps, Thompson also moved from a homeless shelter into an affordable public-housing apartment in Richmond. He even went to check out the campus of Berkeley Community College. For now he’s happy to have a UPS job, no small feat in a city with 16 percent unemployment.

Hanauer, the Workforce Collaborative coordinator who brought in Thompson, tells me that the East Bay green-jobs training is very similar to traditional job-training programs that his organization or an outfit like Goodwill have been teaching for years. Students got a good dose of remedial skills in math and reading, plus communication and presentation skills with an environmental twist. “It is the first time all participants in our class were young, classes had an environmental component, and all participants got a $900 stipend,” Hanauer explained. For Thompson, who hadn’t heard of green jobs before this class and confessed he didn’t understand how global warming worked, it was the stipend that got him hooked more than anything. “It made me feel like I have a job,” he said. 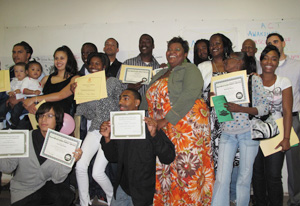 The East Bay Green Job Corps graduation, June 4, 2010. Photos: Kristina RizgaThe Corps graduated 103 students over the course of one year. According to Hanauer, about 20 percent of the participants currently have jobs. Fifteen students are in the solar industry. Six are working in construction, masonry, welding, or painting. About 11 are enrolled in apprenticeships like Solar Richmond or YouthBuild, and about a fifth of the graduates are enrolled in community colleges. Every student works with a case manager for a year after graduation to make sure they stay on track.

Statistically speaking, students from the East Bay Green Job Corps are doing better than green-job training participants nationally. Using the latest available data that measures outcomes for the first eight months of these grants, the Department of Labor reports that approximately 9,184 people are enrolled in the trainings, 3,586 have graduated, and about 13 percent of graduates have jobs. The DOL doesn’t track the age of participants, but a review of proposals to the department shows that young people were a significant segment of the students.

The DOL informed Mother Jones they also don’t track how many green-job trainees enroll in unpaid apprenticeships, community colleges, or GED programs after graduation. So, while Thompson’s job at UPS will show up in the national data about green-job-training program effectiveness, we won’t see anything about his apprenticeship stint at the Solar Richmond before that. Also statistically invisible: Thompson’s move from a homeless shelter to an apartment, for example, or his first visit to a college campus. His case manager helped Thompson get his social security number, birth certificate, and driver’s license. Then, there is possibly the most important, long-term impact: students’ new vision of their future selves as college students or middle-class people, connected to the world beyond their block.

Graduation certificates.Angela Green, who works as a case manager with each student for a year after graduation, is a longtime resident of Richmond. “The media likes to come to graduations and look at the statistics, but they don’t spend time in our communities. I’ll be driving home for lunch hour, and there are fewer kids on those street corners while these trainings are on,” she reflects. “For those two months, the kids who were tearing our communities down, are now thinking how to build them back up,” she tells me.

Still, there’s no denying that while green jobs have grown at a higher pace than other jobs in California, the sector represents only 1 percent of the total Golden State economy. And nationally, we get only about 7 percent of our energy from renewable sources. So, while it may be the most promising—and environmentally wise—field for long-term job growth, in the short-term these gains are a drop in the bucket in an economy that has shed 7.5 million jobs since the recession took hold in December 2007.

Does this mean green job trainers are selling empty hope, as some media reports have concluded in other states? “Depends on what you choose to see,” Currington said. “We told students that the green, and general job market, is crappy, but we wanted them to know that a long-term commitment to vocational or college training can lead to work beyond the minimum wage at McDonald’s or BestBuy.”

I called Thompson a few weeks ago and asked him what he remembers most about the green-job training a year later: “Unity, coming together united to solve a cause. People in my community just don’t do that enough.” He also unplugs all of his appliances when he goes to work now. Is he disappointed that he’s not doing green house calls full-time? “I am,” he said. “But I have this job.” And that’s not all. “Doing house calls made me realize that I’m good at talking to people and selling products to them,” he told me during a break from moving boxes at a UPS warehouse. “I want to save money and get a degree in business administration.”