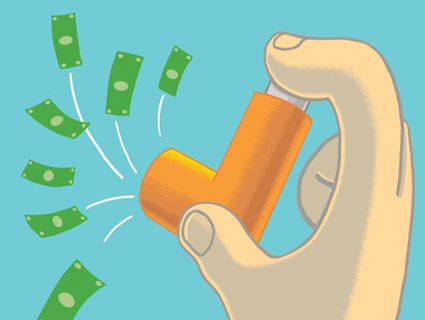 If you or someone you know has asthma, you’ve probably noticed that the price of inhalers has jumped—from as little as $5 a few years ago to as much as $60 today. How’d that happen? The answer is a case study in how drug companies turned a well-meaning environmental regulation into an opportunity to suck billions from consumers.

PHARMA’S BIG PROBLEM In 1987, as part of an international treaty known as the Montreal Protocol, 26 nations agreed to phase out ozone-depleting chlorofluorocarbons. That could have been bad news for pharmaceutical manufacturers, which used CFCs as propellants in their asthma inhalers.

THE BRILLIANT SOLUTION Yet pharmaceutical companies, worried about the emergence of generic competition, soon spied an opening. If they could create and patent a new variety of CFC-free inhalers, securing the exclusive rights to sell them, they could force off-brand competitors out of the market and jack up prices. In 1989, Glaxo Wellcome and seven other (PDF) pharmaceutical firms formed the International Pharmaceutical Aerosol Consortium (IPAC) to come up with a new ozone-friendly product. By 1997, the first CFC-free inhalers hit pharmacy shelves.

PHARMA’S NEXT BIG PROBLEM The drug companies claimed to have spent more than $1 billion on this transition, so they weren’t happy when scientists raised concerns about hydrofluorocarbons (HFCs), the group of gases used in the new inhalers. These propellants don’t harm the ozone layer, but they are powerful greenhouse gases that contribute to climate change. In light of this, several researchers and one generic drug company argued that phasing out the old CFC-based inhalers didn’t make environmental sense—especially given the higher prices asthma patients would have to pay for their medicine.

THE NEXT BRILLIANT SOLUTION But not to worry: The pharma consortium transformed from primarily an R&D outfit searching for substitutes for CFC-based inhalers into a lobbying group intent on eliminating the old inhalers. It set up shop in the K Street offices of Drinker Biddle, a major DC law firm. Between 2005 and 2010, it spent $520,000 on lobbying. (It probably spent even more; as a trade group, it’s not required to disclose all of its advocacy spending.) Meanwhile, IPAC lobbied for other countries to enact similar bans, arguing that CFC-based inhalers should be eliminated for environmental reasons and replaced with the new, HFC-based inhalers.

The lobbying paid off. In 2005, the Food and Drug Administration (FDA) approved an outright ban on many CFC-based inhalers starting in 2009 (PDF). This June, the agency’s ban on Aerobid, an inhaler used for acute asthma, took effect. Combivent, another popular treatment, will be phased out by the end of 2013.

THE FINANCIAL PAYOFF Many of the patents for the new inhalers won’t expire for another six years, so there likely won’t be any generics until then, unless the patents are challenged in court. The switch to the new inhalers will cost American consumers, insurance companies, and the government some $8 billion by 2017, according to FDA estimates. That’s money in the drug companies’ pockets. In 2007, a top market-research firm alerted investors that the US inhaler market “will soon change from low-value to significant.” Sure enough, at nearly $1 billion a year, sales of the market-leading inhaler, ProAir, now rival Viagra’s.

THE ENVIRONMENTAL PAYOFF Oh right, that. By upgrading their inhalers, Americans will prevent about 1,300 tons of CFC emissions a year. By comparison, the estimated global CFC emissions between 1986 and 2010 were 8.3 million tons. According to the University of Michigan’s Edward Parson, an expert on ozone regulations, this impact will be “tiny.”

One estimate suggests that CFC-free inhalers will accelerate the repair of the ozone layer by just a matter of days. And of course, the industry has solved its ozone problem but still has a climate-change problem. “It’s just absurd to think that this is anything that could have a measurable impact,” says Dean Baker of the Center for Economic and Policy Research. “You’d be hard-pressed to find a law that raised costs so much for such a nonexistent benefit to the environment.”