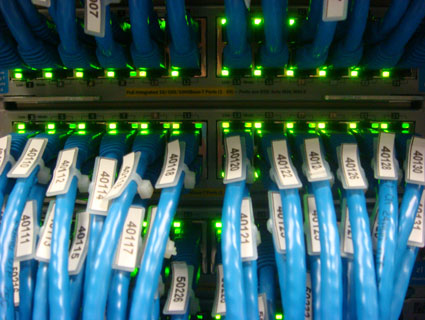 I don’t know about you, but I really do my part to clutter the internet with crap. I post silly photos of my friends on Facebook by the dozen. I email videos of my little cousins opening Christmas presents to my entire extended family. I tweet my chickens’ baby pictures. And that’s nothing compared to my friend Seth, who saves all his emails, along with every single digital picture he’s ever taken, both on his home server and online. I remember reading somewhere that putting two megabytes of data online is the equivalent of burning a pound of coal. By that calculation, Seth’s 240-gigabyte digital hoard could have powered a 100-watt lightbulb 24/7 since the War of 1812. Which got me wondering: Are digital pack rats like Seth and me guzzling tons of energy with our obsessive archiving?

As it turns out, we really aren’t. Some sleuthing revealed that the original source of the widely reported coal figure I’d read was a 1999 paper by a researcher named Mark Mills. Titled “The Internet Begins With Coal,” it was full of frightening statistics and ominous predictions. The report claimed, for example, that the internet used 8 percent of all the electricity in the United States. The gist was that this newfangled information superhighway could change everyone’s lives for the better, but since it would require so much power, we’d better find enough energy to support it. As it turned out, Mills wrote his report on behalf of the now-defunct Greening Earth Society, a group that, despite its hippie name, was affiliated with Western Fuels Association Inc., a coal-industry trade group notorious for sowing misinformation about climate change. Mills and fellow researcher Peter Huber repeated the argument in a Forbes piece headlined “Dig More Coal—the PCs Are Coming,” which included the outdated claim that traffic on the web was doubling every three months.

Mills’ numbers never held much sway with scientists: A prompt rebuttal by a team at Lawrence Berkeley National Laboratory showed that he had overestimated the internet’s electricity appetite by an order of magnitude. Yet people—including, er, yours truly—kept falling for his hyperbole: A year ago, I blogged about a BBC article that claimed that sending an email, due to the archiving on either end, produces as much greenhouse gas as boiling a kettle of water 17½ times. Jonathan Koomey, who led the LBNL team and is now at Stanford University, calls this stat “complete and utter nonsense.” The original source: Mills (PDF).

So what’s the real energy cost of our online hoarding? At the time that I wrote this piece for the print edition of Mother Jones, a Google publicist bragged to me about the company’s green-power purchases but wouldn’t disclose how much electricity its seven main data centers use. But last week, Google finally fessed up. As the New York Times noted, its data centers continuously use enough energy to power 200,000 homes. That’s considerable, but the company also claims that individual Gmail users’ impact is minuscule: In a year, each Gmailer consumes “less than the energy it takes to drink a bottle of wine…stuff a message in the bottle and toss it in the ocean.”

In the end, the energy experts I talked to all agreed that it’s our hardware that really sucks up the juice. LBNL’s Bruce Nordman notes that running your desktop rig for 10 hours a day uses roughly 30 kilowatt-hours per month, costing you about $3—compared to the pennies a data center might pay to store 10,000 of your emails for a month. The takeaway: You’re better off using your gadgets efficiently than sweating about your bloated archive. “You could spend a few hours making sure your personal stash of pictures is kept to a bare minimum,” says IT energy analyst Cody Taylor. “But the energy you’d use going through your archive would probably be greater than the resulting savings.”

Phew! Because I have a bunch of chicken videos that you guys really have to see.

How to compute smarter, and save*
By Lauren Ellis

Lose the screen saver (Savings: $85 annually)
Screen savers make computers work hard, and they don’t save your screen, either—modern displays use less energy in sleep mode. So set your rig to fall asleep after a short time idle. (The EPA recommends 5 to 20 minutes for the screen, 30 to 60 for the box.) Bonus: Shut it down.

Retire the desktop (Savings: $28 annually)
A desktop sucks 2 ½ to 3 times as much juice as a clamshell. Or, to use an automotive SAT analogy, desktop : laptop :: Highlander : Prius. Any questions?

Dim the lights (Savings: $6.50 annually)
Your screen uses 20 more watts of power on its brightest setting than on its dimmest, says the EPA. The impact on your wallet may be minimal, but if every American computer owner dimmed down, the resulting electricity savings would be enough to power 137,000 homes.

Stamp the vampires (Savings: $100 annually per household)
Even when they’re not being used, gadgets (computers and peripherals, game consoles, cable boxes, etc.) can be shockingly wasteful. A set-top digital video recorder sucks 37 watts even when it’s turned off! In short, unplug anything you can, including your work computer at night—which should cut its overall electricity consumption by 31 percent.